Who Knew? Arizona Cardinals Have Number 1 Offense In League Before Preseason Opener

Share All sharing options for: Who Knew? Arizona Cardinals Have Number 1 Offense In League Before Preseason Opener

Guess what? Did you know that there are league rankings already? Believe it or not, before the very first preseason game of the 2012 season, NFL.com has statistical rankings. Based on what?I'm not sure. But on the league's official website, there is a graphic for the matchup between the Arizona Cardinals and the New Orleans Saints in the annual Hall of Fame Game to kick off the 2012 preseason.

What is even better is the fact that the Cardinals, according to this graphic, are the league's best in overall offense and in passing offense. Check it out after the jump. 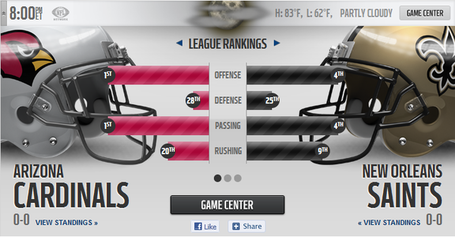 This has to be a mistake, right? If the graphic is based on 2011, Arizona is nowhere near the top of the list in offensive categories. And they are better than the Saints, who are led by record breaking passer Drew Brees?

No matter what the reason is, it feels good to see the Cardinals at the top of that. Too bad it only reflected numbers in fake games.