Cardinals vs. 49ers: 3 keys to an Arizona Week 6 win over San Francisco

Three keys to the Cardinals success this Sunday and a matchup to watch against the 49ers.

Share All sharing options for: Cardinals vs. 49ers: 3 keys to an Arizona Week 6 win over San Francisco

The Arizona Cardinals' Week 6 game against the division-rival San Francisco 49ers marks the beginning of a very difficult four-game stretch. After this, Arizona has a quick turnaround to play their second straight division game when they host the Seattle Seahawks on Thursday Night Football, then they host the Atlanta Falcons and have a bye before hosting the Houston Texans.

To make anything of this season, the offense must get it going this week in hopes of getting on a much-needed roll. The Cardinals (3-2) rank 22nd in passing yards (1,126), 24th in passing yards per attempt (6.6), 25th in passing touchdowns (5) and second in interceptions thrown (9) -- only Eli Manning of the New York Giants (16) has thrown more interceptions.

Here are three keys to the Cardinals walking into Candlestick Park and upsetting the 49ers.

49ers quarterback Colin Kaepernick has struggled with consistency this season, but he is as good as any quarterback in the league when blitzed. His ability to escape the rush when no one is open adds to the fact that he can light up a defense if it gets too comfortable rushing five or more.

That could be a problem for the Cardinals this week. Through five games, coordinator Todd Bowles has sent a blitz 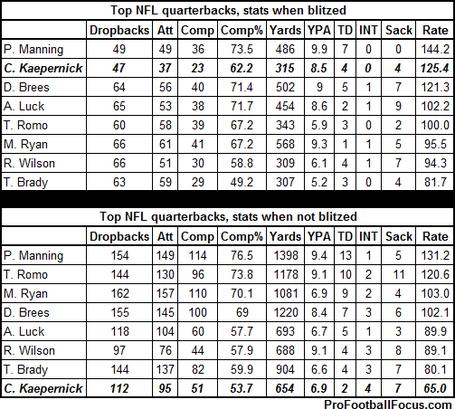 It's not that Arizona won't blitz Kaepernick, but blitzing every other play will not work.

Whereas Kaepernick is likely to torch a blitzing front seven, he has struggled this season when not blitzed. So keeping the five- and six-man rushes to a minimum and blitzing in favorable situations is key this week.

Running up the middle would be best done with Ryan Williams since we now all know Rashard Mendenhall refuses to do it consistently with authority. But that probably won't happen this week -- not unless Mendenhall goes down with an injury.

Someone has to do it, because the 49ers have been susceptible to giving up chunks of yards defending the A- and B-gaps this season. Through five games, San Francisco's defense has allowed a combined 4.6 yards per carry off center and off guard -- it has allowed just 2.4 yards per carry off tackle and off end according to Pro Football Focus.

The Cardinals have been just the opposite, rushing best to the outside mainly because of Mendenhall's faults and Andre Ellington's strength of getting outside.

For the run game to work this week, tight end Jim Dray must be at his best when blocking inside linebacker Navarro Bowman. Bowman has been blown off the ball at times when defending run plays up the gut, including on Trent Richardson's first carry with the Indianapolis Colts -- a 1-yard touchdown run during Indy's Week 3 demolition of the 49ers in San Francisco. 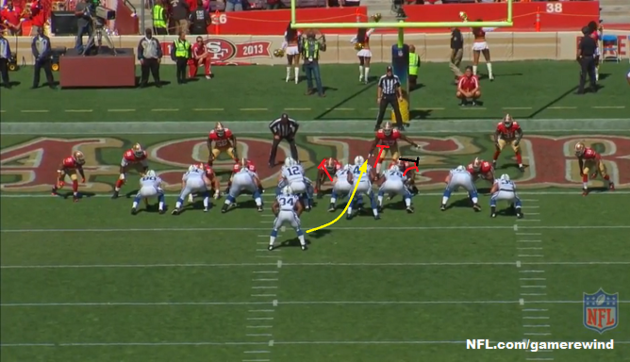 Successful lead blocking is a must this week.

Get the deep-passing game going

To this point, head coach Bruce Arians' vertical passing attack has not been successful. Quarterback Carson Palmer has completed just 5 of 22 (22.7%) on throws 20-plus yards downfield for 139 yards, 6.3 YPA, 3 touchdowns and 3 interceptions for a 53.4 passer rating according to PFF.

The "six-per-game" average is more like 4.4 per game through five weeks. The deep shots are there, but Palmer is not throwing them consistently enough. The picture below depicts Palmer ignoring a wide-open Patrick Peterson to dump the ball off to running back Alfonso Smith for a 9-yard gain.

Peterson may have scored; all Palmer had to do is put it out there. 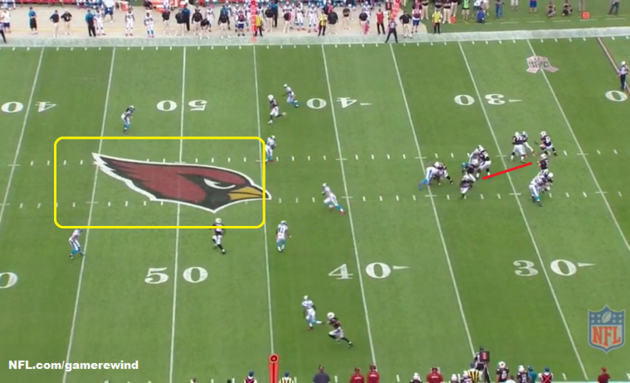 That may be a product of pass-blocking, or it may be a lack of comfort in the offense. Whatever the issue, Palmer must get it going if the offense is to be successful.

Gutting San Francisco's defense on runs up the middle will help open that up. Taking shots at cornerbacks Nnamdi Asomugha and Tarell Brown on deep throws is a good start, as they have allowed deeper completions than others have on the team. Asomugha ranks 20th with 15.8 yards per catch allowed, while Brown ranks 22nd with 15.5 YPC.

The obvious candidate this week would usually be Larry Fitzgerald, but given that he's been limited in practice with a lingering hamstring issue, look for Michael Floyd to be the deep target Palmer goes to multiple times. In the final game of the 2012 season against San Francisco, Floyd had eight receptions for 166 yards (20.75 YPC) and a touchdown.

He is one of only nine receivers to have a game of at least eight receptions for 20-plus yards per carry and at least one touchdown. Other notable names on the list are Randy Moss, Isaac Bruce and Hall of Famer Raymond Berry.

See the full list of nine players at Pro-Football-Reference.com.

That's all the organization is asking of him: Keep Palmer clean back there.

This week is a different challenge entirely. 49ers defensive end Justin Smith is among the strongest players in the NFL, and that's an area where Sowell struggles.

If the vertical passing game is to work, Sowell must keep Palmer's blind side clean. No one is expecting perfection. Just hold down the fort.