Seahawks vs. Cardinals: The pressure is on Palmer to beat Seattle secondary

The Seahawks' impenetrable secondary has looked human at times this year, but it'll be up to Palmer to get the Cardinals up and down the field, and hit the big shot when they have the chance.

Share All sharing options for: Seahawks vs. Cardinals: The pressure is on Palmer to beat Seattle secondary

The idea was that Palmer was good enough to not just keep the Cardinals afloat through a transition, but that Palmer’s talents would put the Cardinals squarely in the playoff race, and so far it has… if you ignore Palmer’s actual play on the field.

Through six games Palmer has been extremely below average, bordering on not just bad, but awful, and yet the Cardinals have found themselves at 3-3 with two winnable games coming up before the bye week and then a plethora of toss up games where the Cardinals may or may not be favored, but should not be counted as possible wins or losses, that includes a Week 11 game against the Jacksonville Jaguars.

Palmer’s numbers are generally worse than what the Cardinals quarterbacks were through the same six week stretch in 2012, having thrown fewer touchdowns, more interceptions and completing nearly the same percentage of throws, all this despite the numerous "upgrades" the Cardinals have made on the offensive side of the ball.

This week, maybe more than any of the previous six is going to be about Palmer showing up and making a difference against a great, but very beatable, Seahawks team, and it’ll start with the passing game.

What the Seahawks have done so far this year on defense is quite good, but it has also shown that they are very susceptible to specific plays, routes, and formations, and those successes of the defense will be because of their ability to take advantage of the Seahawks weaknesses in the secondary, or the Legion of Boom’s Kryptonite if you will.

Setting up the deep pass

Bruce Arians hasn’t been happy with the lack of vertical success the Cardinals have had so far this season, and that may be partially his fault.

Arians "six-shooter" approach is all well and good, but you have to set up those six deep shots, and with the lack of success in the running game with Rashard Mendenhall or the lack of continued running with Andre Ellington, teams don’t fear the Cardinals running game at all.

More so, the Cardinals have consistently looked to establish the intermediate/deep passing game first, before looking to go short and quick and then deep.

Where Seattle has had a lot of problems this season is covering those underneath, short, quick routes, then getting beat deep over the top. 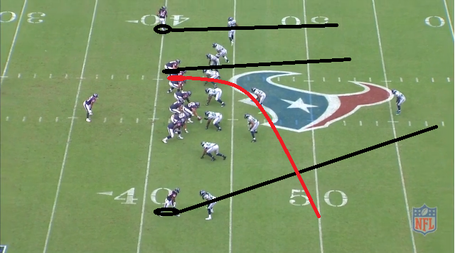 The matchup is created in the Texans favor because they have three receiving options to one side, even if this may not be a formation the Cardinals utilize a lot, it is something that they can do from a split formation if they so choose.

They clear out the short side of the field and drag a tight end into the cleared out area with Chancellor in a trail position and beat for a short throw, but a good run after the catch for an 11 yard gain and a first down.

The best part… The Texans run the EXACT same play, except this time they put Johnson into the middle of the field that has cleared out because of the awareness of the last play. 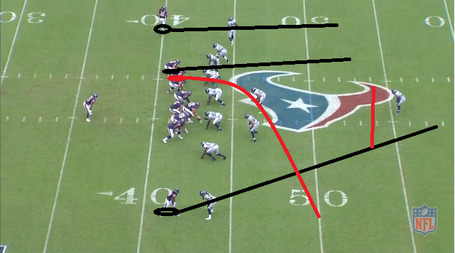 The Seahawks play an aggressive attacking style, so getting them into over pursuit, like the Texans do on back to back short throws, sets up plays for later in the games.

When they get into pursuit mode, they do so in group like attack, and that allows for these situations to present themselves.

These are throws that Palmer has failed to make, or that the tight ends and receivers have failed to catch and make plays from, but these are the throws that will set up big plays for touchdowns.

The Seahawks are looking for something short, which has been consistently open for the Texans and in doing so the linebacker covering the tight end Garrett Graham plays the route soft, and Earl Thomas is late as the only deep help and it gives Matt Schaub an easy pitch and catch for a deep touchdown. 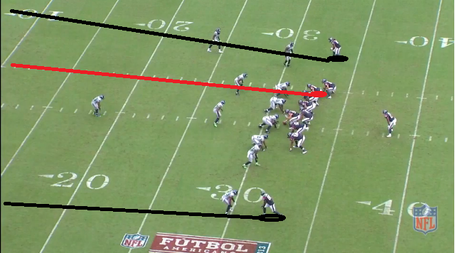 Thomas looks to Brandon Browner’s side as he’s singled up on Andre Johnson at the bottom of the screen, the linebacker in coverage Malcolm Smith expect help over the top, and despite only putting three receivers into routes against seven defenders, the Texans win the one on one match up that matters.

The question again unfortunately is can Carson Palmer make that throw and/or can Rob Housler, Jim Dray, or a wide receiver win enough and finish the play, something that has been missing consistently so far this season.

Against the Colts, well there were some eerie similarities that showed up on how to beat the Seahawks, and it had a lot to do with setting up plays for later in the game. 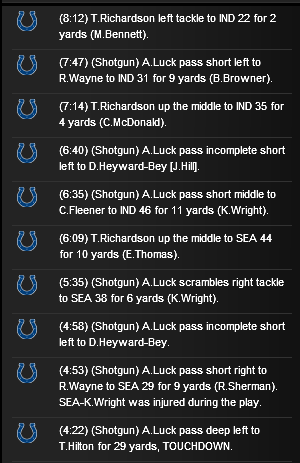 The drive took nearly four minutes of game time and consisted of ten plays, but the key to the drive was that the Colts went into a no-huddle, up tempo game plan, causing the Seahawks to get stuck with certain personnel groupings on the field.

This is more indicative of what we can expect to see formation wise from Arians and company, but the results are the same. 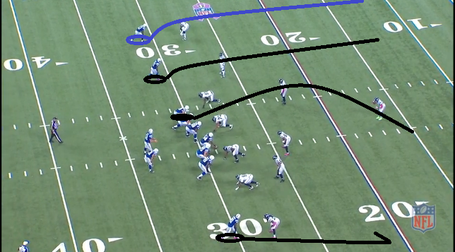 As soon as Luck sees that Chancellor is helping on Wayne (out of the slot) and Thomas is hedging towards the tight end on the crossing route he knows that Hilton (blue indicator) has a one on one match up he can exploit.

This could end up being Brittan Golden, Andre Roberts or even Andre Ellington getting this match up on the outside, but whoever it is, they have to win off the line of scrimmage like Hilton does and use their superior speed, if Browner or Sherman get their hands on them, it’s over and you’re looking and hoping someone else wins and gets open.

There was another big throw earlier in the game, as well, one that showed the vulnerability if the Seahawks Richard Sherman, who was in zone coverage and as a result isn’t physical at the line of scrimmage with Hilton, and again Thomas is late realizing the threat over the top.

When this happens, a guy like T.Y Hilton isn’t going to get caught, because if he’s past you and you’re still in your back pedal, well it’s over.

The pressure is mounting on Carson Palmer, and with every week it is becoming more apparent why two franchises went with inexperienced, and in Terrelle Pryor’s case flat out not ready, prospects over a veteran like Palmer.

Palmer has a chance to put critics to rest against the heavy favorite in not just the division, but in the conference, and in doing so can quiet the calls for Drew Stanton, which are completely uncalled for, and put the league on firm notice that the Cardinals are not just a team that you don’t want to play… they are a team that has the ability to be a factor in the playoffs.

Seahawks vs. Cardinals: Prepping for the Thursday night game