Seahawks vs. Cardinals: 3 keys to an Arizona Week 7 win over Seattle

Three keys to the Cardinals success this Thursday and a matchup to watch against the Seahawks.

Share All sharing options for: Seahawks vs. Cardinals: 3 keys to an Arizona Week 7 win over Seattle

On a short week, the Arizona Cardinals hope to turn things around after taking a fourth-quarter beating at the hands of the arch-rival San Francisco 49ers last Sunday. That is no small task, as the Seattle Seahawks come to town in an attempt to slaughter the Cardinals the way they did in last year's final meeting -- that 58-0 laugher we all sat through.

Hopefully, you all had the opportunity to turn that game off. Lord knows I could not, as I was running the game's live blog over at Bleacher Report.

The Cardinals (3-3) are overmatched in this one, but as long as these three keys are adhered to, things could go much better than that Week 14 embarrassment -- one key, in particular.

Here are three keys to upsetting one of the NFC's top teams on Thursday Night Football.

Take care of the football 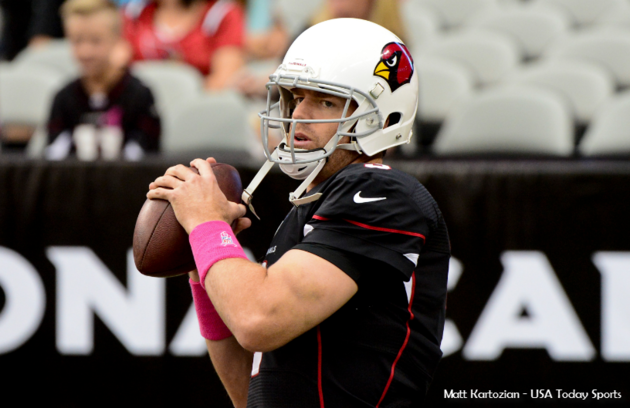 We could leave this column at that and call it a day with the way things have gone this season. The Cardinals are 3-1 when they tie or win the turnover battle this season and 0-2 when they lose it. That says it all for Carson Palmer and the offense.

Palmer has thrown 11 interceptions already this season, which is tied for the second-most in franchise history through six weeks. Only Jake Plummer in 1999 threw more (14), and he did it in five games.

Palmer has thrown multiple interceptions in four games, which is also tied for second over that span (again behind Plummer [5] in ‘99), and he's done it in every game since Week 3.

Nine interceptions in the past month is not how Palmer, coach Bruce Arians or anyone with any knowledge of -- or rooting interest in -- the team envisioned the season starting out.

But, that's how it has begun. Unless it abruptly changes course, Arians may be forced into trying Drew Stanton at the helm. That is a worst-case scenario for the Cardinals.

It has been more than just Palmer's interceptions, however. The game last week was winnable until Larry Fitzgerald fumbled deep in San Francisco territory. Alfonso Smith's fumble on the next drive did not help matters.

Every game from here on out is winnable as long as Arizona takes care of the damn football.

Marshawn Lynch is the catalyst who gets the run game going for the Seahawks, but he's not the only good back residing in the backfield. Second-year back Robert Turbin is a horse, and though rookie Christine Michael has yet to earn any significant playing time -- and with the two in front of him, why would he? -- he is very capable should anything happen to Lynch or Turbin.

But this key is significant for a reason other than simply because Seattle is a great running team.

The Seahawks are 9-1 when quarterback Russell Wilson has thrown the ball 24 times or fewer in a game. When he tosses it 25-plus times, the team record is 7-5.

Those are still not great odds, but they surely are better than a 10 percent chance to win.

The disconcerting thing about this stat is that Seattle is 3-1 this season when Wilson throws 25-plus times and 2-0 when he doesn't.

Still, though, forcing him to make decisions has been a good thing for opposing defenses at times. Arizona's defense, led by its stout run numbers, could realistically stop Lynch and Turbin, forcing Wilson to drop back more often.

Get this stat: The Cardinals are 3-0 this season when they outscore the opponent in the final quarter and 0-3 when they are outscored.

That is utterly mind-blowing.

Some have downplayed the importance of fourth-quarter play this season. There has been a lot of, "I don't want a quarterback who's only good in the fourth quarter," from Cardinals fans recently.

But the fourth quarter is the most important. The tables below confirm that.

It would be great to get a solid full game from Palmer. But if he's mediocre in the first three quarters and lights-out in the final frame, there's a good chance the team will win -- unless, of course, the defense is also faulty and the lead insurmountable by the time the final 15 rolls around.

You have to think at some point Palmer and the offense will get it right for a full game. When that happens, there are no limits to where the team can go.

The defense has played well enough, for the most part, that the team would be 5-1 with a competent offense. The only game they truly were out of was Week 3 in New Orleans.

Even last week against the 49ers, Palmer looked as though he had a light switch turn on above his head following his second interception. He was not great, but he was suddenly improved enough to lead the team back from a deficit three different times. I highlighted why the Cardinals should still trust Palmer for Bleacher Report earlier this week, which you can read right here.

So, while this key could be "Win all four quarters," let's take it one step at a time. This thing is still a work in progress.

In three matchups over the past two seasons, Seahawks cornerback Richard Sherman has completely owned Larry Fitzgerald. The quarterbacks throwing to Fitz assuredly had something to do with that, but nonetheless, the numbers are staggeringly in favor of Sherman.

On 14 targets in coverage of Fitzgerald, Sherman has allowed five receptions for 87 yards (17.4 YPC), 0 touchdowns and 3 interceptions for an 8.9 passer rating.

Palmer has three touchdowns to Fitz this season, but he's been picked off five times throwing to him as well. That cannot happen in Thursday's game.

Fitz is still dealing with a hammy issue. His play lacked something "Fitzy" last Sunday, despite the 75-yard slant route. So with a quick turnaround, he could be useless Thursday night.

Seahawks vs. Cardinals: Prepping for the Thursday night game