The plays were there, but someone always seemed to miss their responsibility resulting in another frustratingly bad offensive output by the Cardinals.

It’s been a frustrating season so far for the Cardinals and their fans alike.

When you sit down and watch the games, you see a team that is "close", something we have talked about a lot, but close in the NFL gets you fired.

It’s about results, and about seeing those results manifest into victories, because the only way you maintain a job in this league is by winning games, and while some fans didn’t expect year one of a "transition" to yield immediate results, the talk of the coaching staff and front office suggested that they expected more than what we’ve seen.

What becomes even more frustrating is that the coaching staff has done a good job of putting the players into positions to make plays, and the players have just failed to do so.

The misses versus the Seahawks-

The Cardinals third play from scrimmage should have been an ominous sign of things to come for Cardinals fans, but we have become enamored with minor victories (getting a first down on the play) that the fact they may have missed a home run isn’t as big of a deal as it should have been. 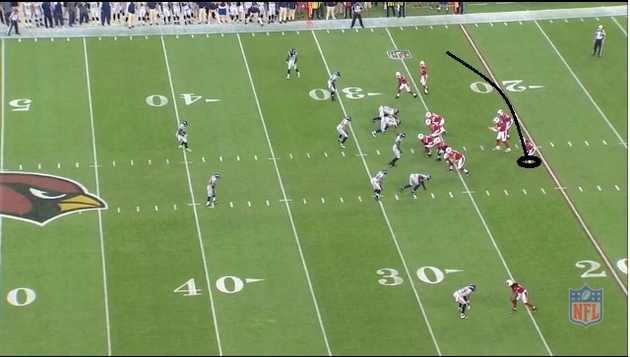 The play is set up perfectly, as the wide receivers are able to drive the DB’s into the middle of the field enough to give the offensive line a chance to get out in front of Andre Ellington on the screen, leaving the offensive linemen one on one with the defensive backs and Andre Roberts with a linebacker.

If the linemen get the block, well there isn’t much in front of him to stop him from turning this little screen into a big play. 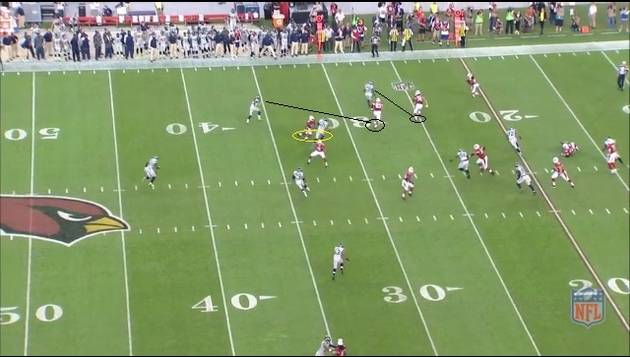 Alas, Paul Fanaika whiffs on his block, and Ellington has to hold up and make the first man miss, instead of catching and going up the field, which results in a nice first down pick up, but still leaves the Cardinals 69 yards away from pay dirt, which may as well be an ocean for this offense.

This is the play many have placed blame on Palmer for the under thrown, some have said it was pass interference on Browner, and others have blamed Fitzgerald for not winning the "jump ball" that was under thrown.

The problem with any of that is the play wasn’t won or lost there, it was lost before the ball ever left Palmer’s hand, because he never moved the single high safety in Earl Thomas.

It should always be assumed in single high coverage, especially against the Seahawks, that the help will come to the Fitz side of the field, specifically if Sherman isn’t in coverage. 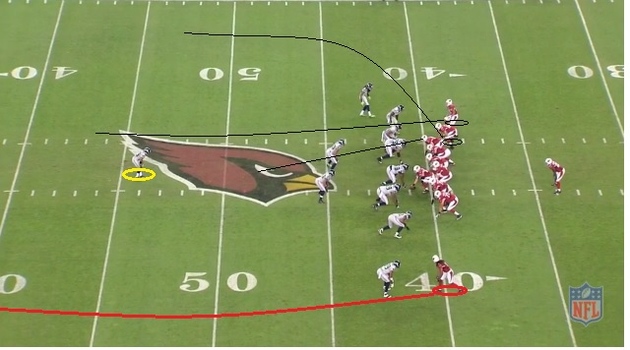 Palmer on the snap looks lazily to the right, Thomas doesn't move at all, then snaps his head back to the left and lofts the ball up to the single covered Fitz, but doesn't put the ball out in front, or with enough zip to get the ball on Fitz soon enough to negate Thomas playing single high. 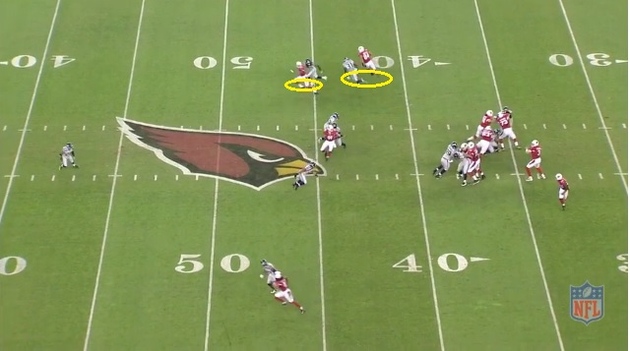 This was obviously going to Fitzgerald no matter what, because from the jump the only person not covered better than Fitz was Jim Dray.

The offensive line actually held up really well and Palmer should have been able to pull down the ball and look elsewhere, or just thrown the ball better.

Yes the interception part of the play was an AMAZING play, but it should never have been a concern for the Cardinals, because there were better options in the routes.

Another play that resulted in a nice throw and catch for a Cardinals first down, where Palmer found Floyd running off a Jaron Brown "pick", the quarterback had Roberts slightly deeper behind Floyd running wide open in the secondary. 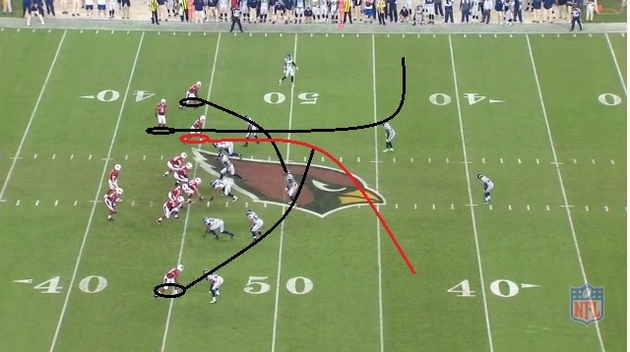 The play in and of itself didn't make a ton of sense from the jump.

Why are the Cardinals throwing so short on third and seven? Yes Floyd made people miss, but get to the sticks and don't leave it up to a pretty good run after the catch to make a first down, but the bad part was, Palmer had Roberts running open in the intermediate with no defensive backs paying attention outside of the deep safety. 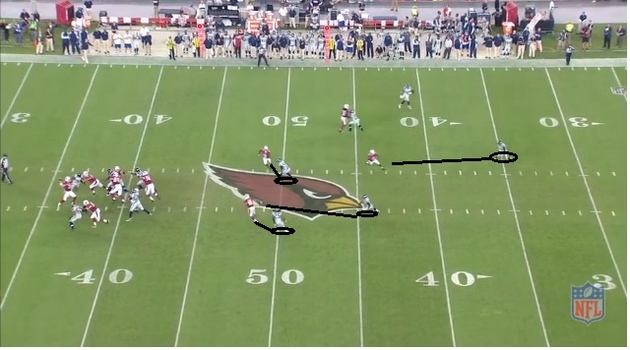 Roberts is open, Roberts is past the sticks, and Roberts probably is able to make a big play after the catch with only one guy paying any attention to him.

Again, the play worked because Floyd got the pick from Brown, and then made some nice moves to pick up the first, but there was another wide open receiver, that could have yielded a bigger play in an offense desperate for big plays.

It's hard to break down this play, because everything was perfect, but the execution by the quarterback AND running back, so just watch the missed opportunity, when the Cardinals could have cut it to 31-20 instead of 31-16.

Why blame Ellington? If he keeps running instead of jumping, well maybe he makes the play, instead he jumps and tries to make a spectacular one handed grab on another inappropriately placed ball.

The Cardinals offense isn't clicking, everyone knows and has seen that, but the reason has more to do with execution, missed opportunities, and just down right bad play.