Panthers vs. Cardinals: 3 keys to an Arizona Week 5 win over Carolina

Three keys to the Cardinals success this Sunday and a matchup to watch against the Panthers.

Share All sharing options for: Panthers vs. Cardinals: 3 keys to an Arizona Week 5 win over Carolina

When the Arizona Cardinals host the Carolina Panthers Sunday, it will be the 12th regular-season meeting between them. Arizona is just 3-8 in the first 11, but it did win its only postseason matchup with Carolina, a 33-13 stomping that kicked off the 2008 Super Bowl run.

The Cardinals are coming off a thrilling ending to a lackluster game in Tampa Bay against the Buccaneers. The 13-10 win was nearly a shutout loss if not for some clutch fourth-quarter play from both the offense and defense.

The Panthers enjoyed a bye week after handing the lowly New York Giants a 38-0 pounding -- the plus-38 is the widest margin of victory to date this season.

But don't be afraid of these Panthers.

There is a formula of sorts for beating Carolina these days, and though it will be a tough bout -- quarterback Cam Newton is nothing if not unpredictable -- these three keys revolve around that formula.

The Arizona secondary has done a great job keeping receivers from getting behind them this season. That appears to be the strategy of coordinator Todd Bowles, and his unit has responded by putting up some very differing numbers on short and long throws.

That will be the game plan once again Sunday, as Newton has thrown deep more often than any quarterback in the league, at 19.3 percent of passes traveling beyond 20 yards according to Pro Football Focus.

But there is statistical proof that Newton and the Panthers struggle when they are unable to have success in the deep passing game. Since Newton's rookie year of 2011, Carolina is 10-10 when he averages 7.50 yards per attempt or greater. That drops to just 4-11 when he does not hit that mark.

Wideout Steve Smith has not been the factor he was for Newton his first two years as a pro, averaging a career-low 10.2 yards per catch through the first month of the season. But if he catches a corner sleeping on a play, he can still burn him deep.

That will assumedly be Patrick Peterson's chore this week, and there's no chance he will be caught taking a nap at any point during the matchup. 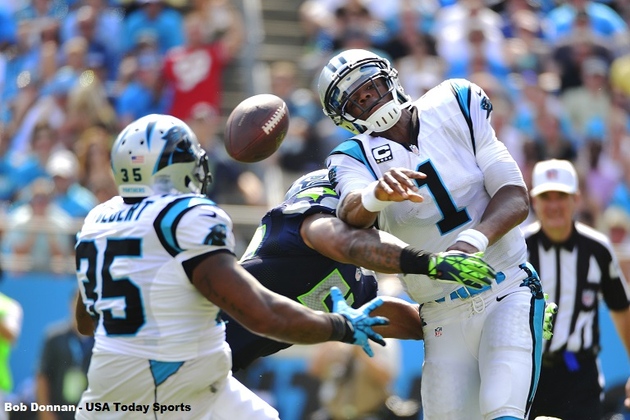 Not to state the obvious, but this is paramount against Newton. When he's pressured, he crumbles like an old piece of bread.

For his career, Newton has thrown 46 touchdowns and 31 interceptions. When under pressure, however, he's thrown 11 TD and 11 INT. His decision-making is affected when he's forced to make something happen or be sacked, and the team's record when he sees heavy pressure is not good at all.

Arizona should have time to get to Newton. It has taken him an average of 2.75 seconds to release a pass this season -- the seventh-highest average among qualifying quarterbacks according to PFF.

But with so many pass-rushers out for the season, do the Cardinals have the beef up front to get to him? Outside linebacker John Abraham hasn't exactly lit the world on fire rushing the passer, nor has defensive end Calais Campbell.

Someone along the front seven must step up, and that someone may be inside linebacker Daryl Washington, who will start next to Karlos Dansby in his first game back from suspension.

With so much depth at the inside ‘backer spot, Washington could be moved around at the line of scrimmage to create confusion for Carolina's offense. He led the team with nine sacks a year ago, which is unheard of from his position. Washington could play a huge role in getting to Newton Sunday, and he should be the hungriest player on the field, given the fact that he missed the first month.

A motivated Daryl Washington is not someone opposing offenses want to face.

Hold a lead at the end of three

This key is tied into getting to Newton, but we will get to that in a minute. First, we must go over ways to accomplish this key.

Did you know Carolina is 2-13 (.133) when trailing after three quarters with Newton under center? Seven of the losses came after trailing by six or fewer points in the fourth.

Success in the first two keys will give the Cardinals a good chance at building a lead heading into the final frame, but only if the offense shows up. Starting faster would be good.

Through four games, the team has only one scoring drive in the first quarter. That came in New Orleans, when quarterback Carson Palmer led an 11-play, 80-yard opening drive that culminated with running back Alfonso Smith's 3-yard touchdown run.

To jump out to an early lead, wideout Larry Fitzgerald must be involved from the get-go -- another target-less first half for Fitz would be a disaster. Panthers cornerback Captain Munnerlyn (one of the better names in the NFL, by the way) cannot cover No. 11, so getting him the ball early and often is a great game plan if you're Palmer.

Another solid way to build and keep the lead is to get tight end Rob Housler involved at some point. It's getting a tad repetitive, but it's about time we see a breakout performance from Housler. This marks the third week he has made this column, and the first two resulted in one-catch afternoons.

Lastly, running back Andre Ellington needs the ball more this week. He has outperformed Rashard Mendenhall the past two games, and with Ryan Williams sitting every week, the team needs someone to step up and be a true No. 1 back. Mendenhall hasn't shown the ability to be that, so the next logical man up would be the rookie sixth-round pick.

Ellington is averaging 6.2 yards per carry this season, and it's not because of stellar run-blocking. He's done it by doing nasty things to unsuspecting defenders.

Pick up your ACL, Darrelle Revis. It fell out of your knee.

Note: Going back to these final two keys being tied together, the Panthers are 0-7 when Newton has been sacked at least twice, has thrown at least one interception and his team enters the fourth quarter with a deficit.

And there's your formula for beating Carolina this weekend.

That's no small task, as Palmer likely has told Sowell. Hardy ended Palmer's Oakland Raiders career on a hit that cracked ribs and bruised a lung during a Week 16 matchup last season. Hardy was flagged 15 yards for the shot, but Palmer told reporters this week the referees were wrong in flagging Hardy, according to the Washington Post.

"He got me good," Palmer said. "(But) I gave him an opportunity to get me, and I don't think it should have been flagged. I think those kinds of hits now, just because they look pretty gruesome, get flagged. But it was a legal hit, and [it was] my own fault for not getting rid of the football."

Hardy planted the crown of his helmet into Palmer's ribcage as he set to release a pass, which is, indeed, illegal.

Regardless of the legality of a hit nearly 10 months ago, Hardy will be a handful for Sowell. It's a matchup to watch because of that fact. If Hardy goes off on Sowell, it could be a long day for the Cardinals.