In a league of quarterbacks that suck or are hated, Palmer inspires indifference.

Share All sharing options for: Carson Palmer, the NFL's most 'meh' quarterback

Jon Bois, for SB Nation, put together a somewhat scientific article about quarterback performance and perception, coming up with the "Quarterback Hate Index."

Using Google and stats, he came up with this chart: 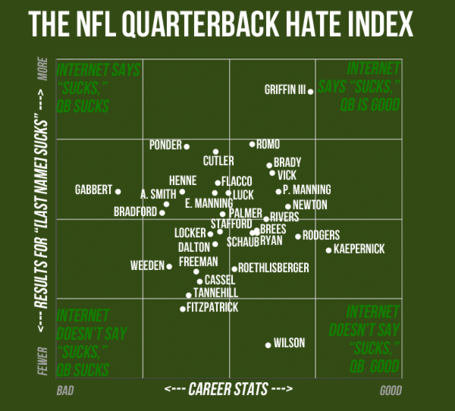 As you can see, using 2012 stats, RG3 is a quarterback that is despised and is really good. Russell Wilson, though, has very little hate towards him. Blaine Gabbert's hate rate is high and he is bad.

Carson Palmer of the Arizona Cardinals? He is right in the middle. He is neither very hated not not hated. He is not bad, but not great statistically.

What is he? The most "meh" quarterback on the list. He inspires indifference.

Have you seen the Cardinals offense? Sort of the same thing.

Fans don't really hate him. He isn't Derek Anderson. He isn't Kevin Kolb. Those guys generated hate. But he is annoying this season with his nine interceptions in five games.

he also isn't Levi Brown, who was the fans' whipping boy for years.