Sitting at 3-2, the Cardinals are currently tied for 2nd in the division.

But the winning record doesn't mean the team is without its fair share of questions. The Writing Staff took their shot at answering three of these.

Don't forget to answer the questions yourself in the comments below!

1) Do you think Andre Ellington should surpass Rashard Mendenhall on the depth chart?

Cdeveau: Talent wise I'm sure he has. As far as designation goes, no, I don't believe Coach Arians will name Ellington the starter.

Jesse Reynolds: I don't think Ellington should be the starter, however that doesn't mean he shouldn't get as many or more snaps than the starter. Ellington is dynamic and has shown himself to be a play maker but as I stated in the forums I think he a Darren Sproles type of back that can do a lot of damage but is not an every down runner.

Shaun Church: The way it is now, the two are pretty close to splitting offensive snaps. Last week against Carolina, in fact, they each had 30 snaps according to Pro Football Focus. But Mendenhall was given 17 carries to just seven for Ellington. That is what needs to change. Mendenhall is next to useless right now. The picture below says it all. 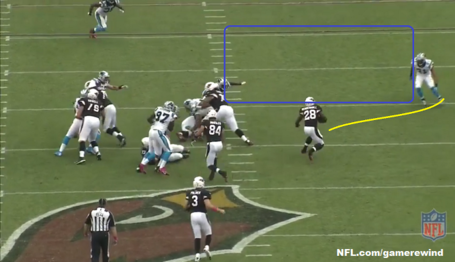 Meanwhile, Ellington is averaging 6.7 yards per carry on the season -- more than double that of Mendenhall.

I'd really like to see Ryan Williams active and playing this weekend in San Francisco. Many say him being "injury prone" is reason enough he shouldn't play; but isn't Mendenhall just as "injury prone?" He is not the same back he was pre-ACL tear.

Alex Mann: He could, but it won't happen. Ellington does not have that body to withstand 60 carries per game, like coach Arians said. I think of him as Darren Sproles where he can get his carries, make he most of them, but not to be able to carry the load for an entire season. Maybe a game or two.

Jess Root: This I'm not sure about, especially since he is playing both running back and receiver. If he were to pass Mendenhall, then he would not likely be able to be featured in that fourth receiver role he plays right now. While Bruce Arians says 30-35 plays is about right for him, I don't see how 40-45 would hurt, as long as he is being used in the same role.

Khodder: I cannot find a single reason he should not. He has been more efficient with his touches on the ground, he has displayed better vision, more decisive cuts, better big play ability. He is also a better pass catcher and a capable blocker. I simply cannot think of a single reason why Andre Ellington should not be the lead back on this team getting 15-18 carries a game. Bruce Arians mentioned he does not think Andre has the body type to be a lead back, but it was not 3 weeks ago when Arians said the exact opposite after the Lions game.

2) What do you think is the main problem with the offense?

Cdeveau: It's offensive? Oh, you mean you want me to point out what their shortcomings are so they can be fixed. Certainly. I bill at 225 an hour. Now that the financials are out of the way, my prognosis. Carson Palmer isn't accurate enough. He has also developed the same scared pattern that Kolb fell into last year due to the line. Mendenhall isn't hitting the open holes with purpose. 3rd down conversions. Drops. Red zone offense.

Jesse Reynolds: AussieWR said it best, the line gave up pressure on 15/30 passing plays. Not many QBs can perform well under that kind of constant pressure. The offense is a sum of small things building up into bad play. While Carson has played poorly Carson has had moments like his game winner against Tampa Bay and putting the final nail in the coffin against Carolina.

Shaun Church: The continued usage of Mendenhall as the No. 1 back is partly to blame. It's also the entire passing attack. The plays are there, but Carson Palmer and Co. are not on the same page at times. Sure, Palmer has made some boneheaded throws.

But his receivers are not getting open quickly enough at times, while other times they are open but Palmer doesn't have the protection to place the ball accurately. Then, there are times when Palmer has protection and his receiver is open, but he does not look for the ball once it's thrown to him (I'm looking at you, Rob Housler).

Overall, the protection has been better, and so has the quarterback play. You're looking at the screen in disbelief that I would say Palmer has been better than last year's quarterbacks, but he has been. The mistakes I see on tape from Palmer are not talent issues, and they're not all poor decisions (his third interception against Carolina was a really bad decision). I see a lot of timing issues leading to picks.

And those are fixed with practice and film study.

The offense is new. The coaches are new. The quarterback is new. That means there will be some growing pains to get through before this thing is a well-oiled machine. They will work out the kinks and have the offense running better, of that I am sure.

Alex Mann: Pressure, lack of consistency from Palmer, Mendenhall not reading the correct hole. That goes with the mental errors, or just the really stupid holding calls that kill some of our really spectacular drives. If we can fix the mental mistakes, and the pressure, this offense could find it's spark very soon.

Jess Root: It boils down to two things -- protection and receiving routes. Palmer is rushing throws because he is getting pressured so much. Half of all his throws had pressure. He is usually making decent reads, but pressure rushes them or affects his throw. Likewise, there is still way too much of players not being on the same page or not running the route right. They don't get the depth they need to or just aren't looking for the ball. You would think things would be better at this point, but I guess it has been tougher than thought to learn.

Turnovers in key positions. You cannot turn the ball over when you are in scoring position, Palmer has done that multiple times this season.

3) What will be the key to beating the 49ers on Sunday?

Cdeveau: Playing flawless ball on defense and getting the offense to wake up. Otherwise it'll be a long Sunday.

Jesse Reynolds: This game is more winnable than I previously thought it was. SF's offense struggles to move the ball through the air and relies on it's defense and running game (sound like someone we know, have played against?). The Niners offense is 22nd in points, 25th in yards, 31st in passing yards and 5th in rushing. Their defense is 12th in points, 5th in yards, 2nd in passing and 20th in rushing. The Niners have had a tough schedule thus far so they aren't as weak as their schedule indicates but with Aldon Smith, Crabtree and Manningham out the Niners are very beatable right now. To win we need to stop the run, effectively run the ball and hope the defense beats up on Kaepernick like they did Newton.

Shaun Church: There are many keys to going on the road and beating the 49ers on Sunday. None are more important than getting the offense going and simply keeping Colin Kaepernick and the San Francisco offense on the sideline. I am confident the great rushing attack of the 49ers will be held in check -- the 49ers are No. 1 in rushing touchdowns (7), No. 6 in rush yards per game (140.2) and No. 9 in rush yards per carry (4.58) -- because of Arizona's run defense. It is the real deal, and they've halted other potent rushing attacks this season with relative ease.

Arizona is one of three teams that have not allowed a rushing touchdown to a running back this season (Tampa Bay, San Diego).

But getting the offense on track is essential this week. We all saw what happens when an offense makes mistakes against San Francisco, as last week the Houston Texans were embarrassed on Sunday Night Football. That means a crisper passing attack and getting Ellington more involved throughout the game. He has served as the No. 4 wideout at times, which is fine, but he needs to be given more carries in the backfield. That yards-per-carry average is just sick, and further including him will help get the offense going.

Alex Mann: Defense will need to play exactly like they did in the second half last week. SF struggles in the air, and since there is no Crabtree to give Peterson fits, we need to control the run game, Kaeps ability to move around, Boldin, and of course Davis. If we can do that, and our offense keeps Palmer clean and gives him enough time to throw, Arizona should contend.

Jess Root: The defense needs to play as well as they have. No way around that. Beyond that, they weren't surviving three picks from Palmer. Even if the offense is not great, they can't turn the ball over. If the defense is playing great, then they really will need only a couple of good drives offensively.

Khodder: Clean football. No penalties, No Turnovers. We have to finish drives offensively and stop drives defensively.

It sounds like a tough gig, but really this is what you should strive to do in every game.

To scale it right back, third down and redzone production on both sides of the football will be absolutely key.