2012 Arizona Cardinals draft may be one to forget

Despite a successful 2013 season thus far, the Arizona Cardinals 2012 draft looks to be one that didn't go as well as planned.

Share All sharing options for: 2012 Arizona Cardinals draft may be one to forget

One of the reasons this season for the Cardinals has been so fascinating has been because of the lack of impact from the last two draft classes they have received.

I talked about one of the possible redrafts from 2013, focusing on how not getting any impact from their first or second round picks makes this year even more impressive, but if you look at the 2012 draft, the Cardinals really whiffed, in a bad way.

Sure Michael Floyd has made strides in year two, but he’s still only on pace for 68 catches for 866 yards and four touchdowns, and I took the liberty of taking out Floyd’s game nine because he was unable to finish it with injury.

Drafting a number two wide receiver at pick 13 isn’t a bad thing at all, but it maybe isn’t the best idea when you are a coach on your last leg and need to find a way, any way to shore up the offensive line.

Add to the fact that Floyd has been maybe the fifth or sixth best receiver in the class, and of those five were drafted after Floyd, and it just makes you wonder what a player like David DeCastro, Kevin Zeitler or even a Riley Reiff would have done to impact the team in 2012 and moving forward. 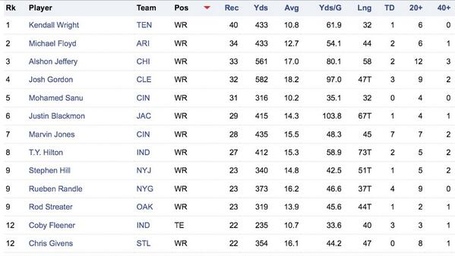 The thing is that Floyd looks like, and should be fine overall as a player moving forward, so this pick shouldn’t end up hurting that much, even if Floyd’s impact will be limited until the Cardinals find an answer at quarterback.

The real trouble starts after Floyd.

Two of the prospects aren’t even on the roster anymore in Jamell Fleming and Senio Kelemete.

One is "on the roster" in name only in Ryan Lindley, as he looks to have little to no future on the roster going forward, of course that could be completely wrong and the Cardinals could just be hiding him and grooming him (ok stop laughing).

You see, NFL Drafts are only deemed "successful" if you are able to find three starters, or a truly special talent, maybe even transcendent, at a "high value" position.

There’s the potential of Bobby Massie returning to the starting lineup, but there seems to be something amiss with this situation that we don’t have all the information about.

It’s hard to fathom that Massie could be any worse than how Winston has played, as ProFootballFocus has Winston graded as the fourth worst right tackle in the NFL for the season and the seventh worst tackle in the NFL, and Massie is at least a young and learning prospect, not an eight year veteran.

Maybe the most impactful pick thus far has been that of special teams ace Justin Bethel.

He’s a game changer on specials, and that’s been invaluable for a team that is in consistently close games.

No, I didn’t forget Nate Potter; it’s just hard to comment on a guy that in such limited snaps has been graded out so low.

This is what makes this season weird and truthfully why so many doubted the Cardinals coming into the season, in a season where you expect second year players to take the next step, and two of them seem to be in Floyd and Bethel, this team is doing it without much impact from those picks.

Carson Palmer has shown improvement, the defense is maybe the best in the NFL, and they have a handful of weapons... and Rashard Mendenhall.

To have a turnaround be successful it typically is done so by building through the draft… and the Cardinals seemed to have done that in 2010 and 2011, let’s just hope 2013 looks better this time next year than 2012 does.