Cardinals vs. Jaguars: 3 keys to an Arizona Week 11 win over Jacksonville

Three keys to the Cardinals success this Sunday and a matchup to watch against the Jaguars.

Share All sharing options for: Cardinals vs. Jaguars: 3 keys to an Arizona Week 11 win over Jacksonville

Playing road games in the NFL is a tough gig no matter the competition. This week, the Arizona Cardinals travel over 2,000 miles to take on the Jacksonville Jaguars in a game some believe will be much tougher than others assume.

East-coast early games have historically been anything but kind to the Cardinals (5-4), although they did win one last season -- you all remember that 2012 Week 2 trip to New England.

The Jaguars (1-8) are finally off the winless list after beating the Tennessee Titans in Nashville last week, 29-27. It's not as though Jacksonville was lucky and beat its division rival by two points on a last-second field goal, however. The Jags led wire-to-wire and held off Ryan Fitzpatrick's comeback attempt at the end.

This game will be tough, no doubt. But it is incredibly winnable if the Cardinals execute. Here are three keys to beating Jacksonville.

Run the ball throughout

Running the ball, despite what some pundits say, is still a necessary part of football. Running the ball successfully is not always needed; the mere fact that a team is willing to line up and pound the rock up the gut is good enough to get the job done in some cases.

The chart below breaking down Arizona's called run plays to running backs says it all: The more the Cardinals run the ball, the more successful the offense is.

Granted, the second-quarter rushing stats are a bit skewed because of Andre Ellington's 80-yard touchdown. But the point here is that Arizona must run the ball from the get-go in order to put up more points on offense.

Another great reason to run the ball from start to finish this weekend is because Jacksonville is flat-out terrible at defending the run. Through Week 10, the Jaguars have allowed the most rushing yards in the NFL (1,377), the most rushing touchdowns (14), the most games surrendering at least 150 yards on the ground (5) and the fifth-most yards per carry (4.64).

Andre Ellington must be the guy this week. Jacksonville is slow up front, so the rookie should be able to gash them for big chunks. Here's to hoping head coach Bruce Arians understands why it's better that Ellington gets more touches than Rashard Mendenhall.

More on that in a minute.

Jacksonville is awful at defending play-action passing -- there really is no other way to say it.

One problem the Cardinals have had in play action is that Carson Palmer has yet to throw a touchdown pass out of it, which is crazy.

Palmer and Jacksonville's starter for Sunday's matchup, Chad Henne, are the only two quarterbacks who have yet to throw a touchdown out of play action this season among quarterbacks with at least 50 percent of their respective teams' drop-backs.

A better rushing attack from the Cardinals should open up play action, especially downfield. And if both the run game and vertical passing attack are successful this Sunday, a victory is sure to follow. 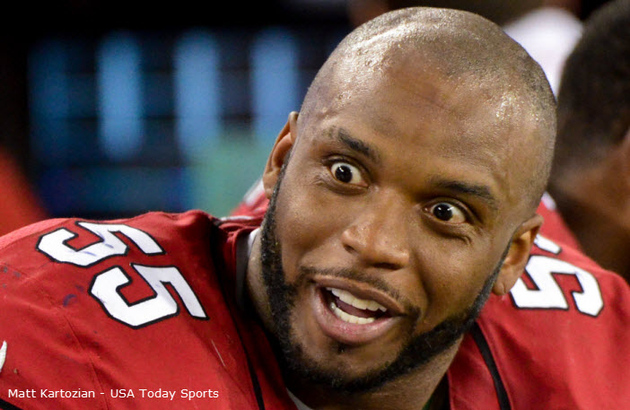 This goes for both sides of the ball. On offense, the tackles must hold off the defensive ends to give Palmer time to throw. Right tackle Eric Winston will have his work cut out for him against Jason Babin, while left tackle Bradley Sowell will mainly face Tyson Alualu.

The interior offensive line has to get push early on against Sen'Derrick Marks and Roy Miller. Both have struggled to defend the run this season, so giving them confidence by allowing them early stops is not in the offense's best interest.

On defense, we all know Arizona's front seven stacks up with anybody's in the league, led up front by defensive ends Calais Campbell and a re-energized Darnell Dockett.

But a surging John Abraham is key to winning up front and, ultimately, on the scoreboard. He has six sacks over the past three games, which is a franchise record for a three-game span. It has been fun to watch, and it could continue this week.

Jacksonville traded away its starting left tackle, Eugene Monroe, to make way for No. 2 overall pick Luke Joeckel. That ended quickly when the rookie broke his ankle during a Week 5 loss to the St. Louis Rams.

Now it's up to Cameron Bradfield to stop Abraham. The second-year undrafted free agent out of Grand Valley State has been just okay in replacing Joeckel -- nothing special, but nothing terrible as we saw from Sowell early on.

It's annoying to continually discuss the divvying of running back touches this far into the season. Ellington has outperformed Mendenhall in every way imaginable so far, yet Arians continues to give Mendenhall the bulk of the touches.

We witnessed what should have been the birth of an NFL star three weeks ago when the rookie tore up the Atlanta Falcons defense for 162 total yards on 17 touches (15 carries, 2 receptions).

But Mendenhall started the first game following the bye and had one more offensive touch than did Ellington. Here is a stat that Arians must not be aware of, because if he knew this, Ellington would be his go-to guy:

Yes, people. On 1st-and-10 this season, Andre Ellington has carried 24 times for 200 yards (8.33 YPC) and two touchdowns. That yards-per-carry average is good for No. 2 in the NFL among running backs behind only the New Orleans Saints' Mark Ingram (8.67 YPC).