Colts vs. Cardinals: 3 keys to an Arizona Week 12 win over Indianapolis

Three keys to the Cardinals success this Sunday and a special matchup to watch against the Colts.

Share All sharing options for: Colts vs. Cardinals: 3 keys to an Arizona Week 12 win over Indianapolis

The Arizona Cardinals and Indianapolis Colts are more similar than you would think at first glance. There is the obvious connection: Bruce Arians and his host of coaches and players he brought with him from Indy.

But there are other, less obvious similarities.

One in particular is interesting: Both teams are in the negative for first-half scoring margin but on the plus side for the season. In fact, they are two of only four NFL franchises in that category through Week 11.

What that means is that these two teams, the Cardinals (6-4) and Colts (7-3), struggle in the first half but excel in the second -- especially on defense. Indy ranks fourth with 77 points allowed in the second half, while Arizona is right behind them in fifth, having allowed 82 points.

Should we expect an offensive explosion in the first two frames and a stalemate in the third and fourth? Most would probably prefer the opposite and save the offensive fireworks for the end of the game. We will see.

Here are three keys to the Cardinals success this weekend.

Entering Week 12, Colts outside linebacker Robert Mathis leads the NFL with 13.5 sacks, which is already a career high with still six games remaining. His five games this season with at least two sacks are two more than anyone else. To say he is playing his best football at age 32 is an understatement.

Mathis has played around 55 percent of his snaps from the right side of the defense this season according to Pro Football Focus, meaning he will see a lot of both left tackle Bradley Sowell and right tackle Eric Winston. Considering both tackles have had their struggles this season, it would be in Arians' best interest to double-team Mathis wherever he lines up on the field.

That can be done with an extra lineman -- which has been Bobby Massie of late -- or, perhaps a better idea, with tight end Jake Ballard. The Cardinals could motion Ballard to either side depending on where Mathis lines up in an attempt to eliminate the threat he poses.

When Carson Palmer receives the snap on Rob Housler's first career touchdown, the tight end kicks out to block Houston Texans outside linebacker Whitney Mercilus. As of now, Mercilus is under the impression that Housler is a pass blocker on this play. 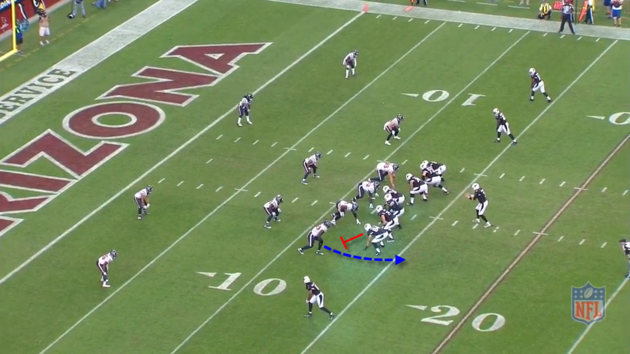 But soon after Palmer drops back, Housler releases into the flat while Mercilus continues toward the quarterback. 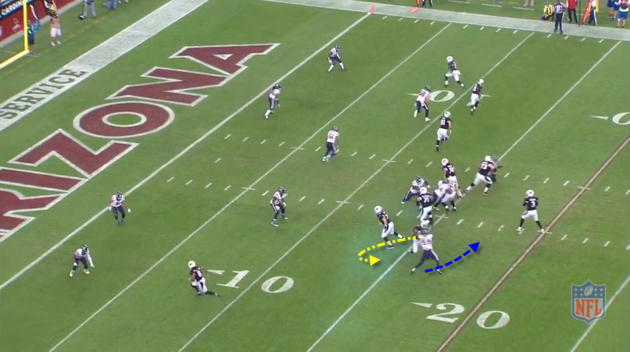 By the time Mercilus realizes what happened, Housler has the ball in his hands and has blockers out in front. All he can do is watch as Housler rumbles into the end zone for a key touchdown. 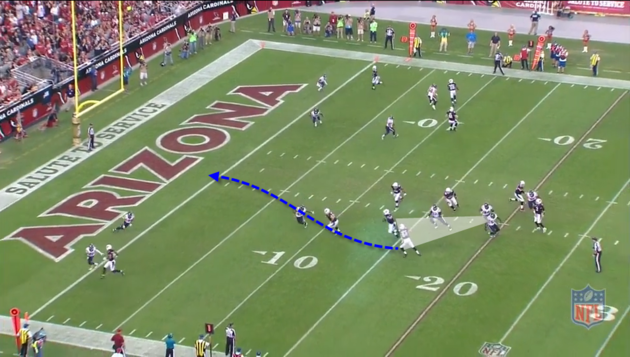 The Colts so far have been an incredibly predictable team when they find themselves down in a game. When trailing in the first half, quarterback Andrew Luck has thrown the ball on 69.0 percent (129-of-187) of Indy's plays. In the second half, that jumps a bit to 71.1 percent (113-of-159).

Playing with the lead against Indy would give coordinator Todd Bowles free reign to unleash the dogs on Luck, including the red-hot John Abraham, whose seven sacks over the past four games is a franchise record. He needs just a half-sack on Sunday to set the five-game mark as well; a host of players, including Bertrand Berry, Simeon Rice and Freddie Joe Nunn are all tied with seven over a five-game stretch.

Both Colts tackles, LT Anthony Castonzo and RT Gosder Cherilus, rank highly overall according to PFF. But Castonzo struggles to hold off pass-rushers -- his 36 QB pressures allowed this season ranks near the bottom among starting tackles.

Abraham could have another big game regardless of the score, but playing with a lead will allow him more opportunities to get Luck to the ground.

Be better on special teams

Potentially being without gunner-extraordinaire Justin Bethel won't help matters as he recovers from a concussion suffered last week in Jacksonville. Kick returner Jordan Todman had two returns of 27 yards and two more of 31 and 59 yards for the Jags last week -- that's four of the top 11 returns against Arizona this season, all in one game.

Arizona got away with it against a terrible Jaguars team, but that cannot happen this week against a formidable foe in Indy. The game is going to be tough enough as it is; allowing Luck good field position all afternoon will make it harder on the defense.

Arizona ranks in the middle of the pack on special teams, with a +9.1 rating according to PFF -- all because of Bethel (+16.5), punter Dave Zastudil (+10.2) and kicker Jay Feely (+16.5). The rest of the team comes out to be far below average, and they must get it together this week -- especially if Bethel sits.

Cardinals writer Darren Urban crafted a brilliant piece this week on the relationship Arians and some of the Cardinals coaches have with Colts head coach Chuck Pagano, highlighting the heartrending story that was Indy's 2012 season.

Arians, of course, filled in as the interim head coach in Indianapolis while Pagano received treatment for leukemia and in doing so led the team to a 9-3 record. The 60-year-old fill-in was given the NFL's Coach of the Year award after the Colts made the playoffs with an 11-5 record.

Arizona's new front-man likened this weekend's matchup to a backyard brawl between siblings, per Urban's story:

"Last year was very special," Arians said. "(Sunday) there will be a lot of hugging and high-fiving, and then, just like playing your brother in the backyard, ‘I'm kicking your ass.' "

Based on this matchup alone, the game between the Cardinals and Colts should be a great one. Arians and Pagano know each other well and, because of that, you should expect some new offensive wrinkles from Arians this week.

Palmer is running the exact same offense Luck ran just a season ago, so it's a given the Colts know what to expect in certain situations. Will we see a trick play or two from Arians?

That possibility adds to the allure of the game, that's for sure.

All statistics for tables provided by Pro-Football-Reference.com.