Texans vs. Cardinals preview: Does the Houston offense present a problem for Arizona?

With the change at quarterback for the Texans, the offense seems to be getting back on track in Houston. Could that be a problem for the Cardinals on Sunday?

Share All sharing options for: Texans vs. Cardinals preview: Does the Houston offense present a problem for Arizona?

While the Houston Texans may be 0-2 in two starts with Case Keenum at quarterback, their offense seems to be getting back on track for really the first time this season.

Through those two games, one against arguably the best defense in the NFL in the Kansas City Chiefs, Keenum is 35-59 for 621 yards and four touchdowns with no interceptions.

His ability to not turn the ball over, as well as move in and out of the pocket, he's run the ball six times for 36 yards as well, really plays to the Texans zone running scheme as well as their West Coast passing offense, and he's really done a great job through two games of setting up the deep passing game of the Texans, and really rejuvenating Andre Johnson.

How has it happened? 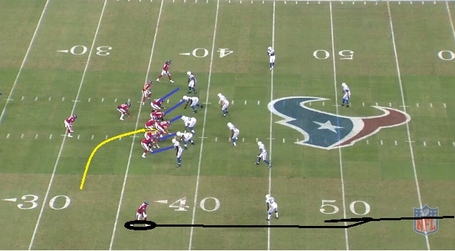 The Texans come out 20 personnel, motion the wide receiver down to a "flanker" position and play action roll out Keenum.

While doing this the entire Colts defense, except for Vontae Davis on Johnson, bite on the play action, and Johnson runs a beautiful double move to get by Davis for an easy touchdown catch.

While the Texans running game hasn’t been nearly as potent, they are still averaging almost 130 yards per game, and it is still an important, and vital part to their offensive attack, which sets up their deep passing game, which was on display in the first half of the Texans loss against the Colts, but also showed up in their game against the Chiefs.

Against the Chiefs we again see the Texans set up in a 20 personnel, this time in the shotgun. 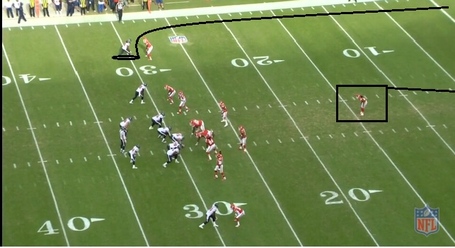 DeAndre Hopkins is single covered, this is something that will be a concern as Jerraud Powers has been subject to routine beatings in single coverage and Keenum does a good enough job of freezing the free safety and then throws a beautiful bucket throw to Hopkins who is able to get both feet down for the score.

The scariest part is that Keenum has the utmost faith in his receivers, and specifically Andre Johnson.

The Texans use the "Pistol" formation, because of its effectiveness in the run game, but in this instance it sets up the Texans passing game again. 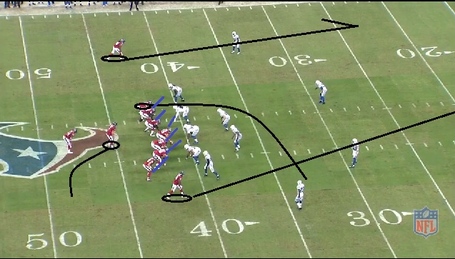 As the Texans run a play action fake, the backend of the Colts defense stays home this time, but Johnson is able to get behind the safety, something that the Cardinals have had problems with, and Keenum puts the ball up for Johnson and lets him go get it.

It's a ballsy throw, but the Texans wide receivers are much like the Cardinals in that their quarterbacks believe they will come down with the ball no matter what, and through two games for the Texans, that hasn't been a bad plan of attack for Keenum.

What it boils down to for the Cardinals defense is staying honest, not looking to make splash plays, and keeping everything in front of them at all times, because this Texans offense thrives on two things:

1. Over pursuit in the run game opening up cutback lanes.

2. Over pursuit on play action allowing the wide receivers to get behind their defenders.

With as good as the Texans offensive line has been, no sacks in the last two games after giving up five sacks to the Rams, this Texans offense looks to be getting back on track, and that needs to stop in Glendale this weekend if the Cardinals want to get back over .500 and back into the playoff race.