Texans vs. Cardinals: 3 keys to an Arizona Week 10 win over Houston

Three keys to the Cardinals success this Sunday and a matchup to watch against the Texans.

Share All sharing options for: Texans vs. Cardinals: 3 keys to an Arizona Week 10 win over Houston

The Arizona Cardinals haven't won a game following a bye week since beating the Houston Texans in Week 5 of the 2009 season. That game, at University of Phoenix Stadium, was tied at 21 apiece until then-Cardinals cornerback Dominique Rodgers-Cromartie picked off Texans quarterback Matt Schaub and took it to the house from 49 yards out with 2:30 to go in the game.

This season, the two teams meet once again following an Arizona bye, but Schaub will not quarterback this Texans team. His season could be over not due to a foot injury he sustained in October, but because he has been replaced by second-year QB Case Keenum, according to Brian Smith of UltimateTexans.com.

Here are three keys to the Cardinals success this week against the Texans.

Houston's offense has taken off with Keenum under center despite its 0-2 record in his starts. Much of that is because the rookie likes pressing the issue downfield early in games.

In two starts this season, Keenum has been brilliant when throwing beyond 20 yards, completing 7-of-12 passes (58.3%) for 270 yards (22.5 YPA), 3 touchdowns and no interceptions for a 142.4 passer rating, according to Pro Football Focus.

The Texans use a lot of double moves off of play action with Keenum, usually rolling him out of the pocket when doing so -- as seen below. Indianapolis Colts corner Vontae Davis could do nothing but watch Andre Johnson walk into the end zone for a 62-yard score on the third play of last week's Sunday night showdown because of a perfect double move set up by a play-action rollout. Davis bit hard and couldn't recover. 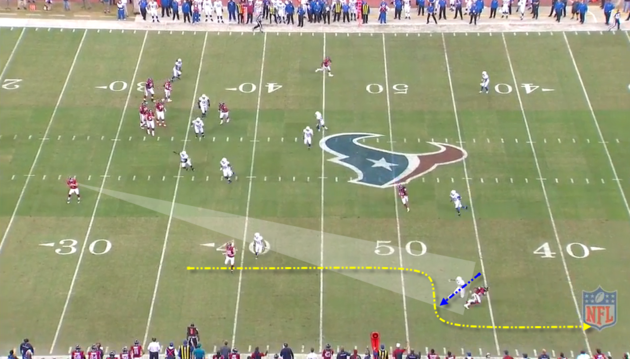 Patrick Peterson has the task of taking Johnson out of the game this week, and he must be at his best from the first play. As stated, Keenum and the Texans love taking deep shots early.

Houston will have a different play-caller this week with head coach Gary Kubiak recovering from a stroke he suffered at halftime last week. That doesn't mean Keenum will run a different playbook, however. The Texans will still look to go deep early.

Against the Atlanta Falcons, rookie running back Andre Ellington racked up the fourth-most rushing yards by a Cardinals rookie since 1960. He carried 15 times for 154 yards and a touchdown -- an electrifying 80-yard gallop in the second quarter.

It's doubtful he will have a repeat performance against a stingy run defense such as the Texans, but he has succeeded against everyone he's faced except the Seattle Seahawks. At this point, it's not out of the question that he will take one the distance.

The entire offense appears to thrive when Ellington is in the game -- his presence is felt in both the running and the passing game.

Veteran Rashard Mendenhall was back at practice this week, though his status for Sunday is still unknown. With the way the rushing attack succeeded two weeks ago, there may be no rush to get him back to the action. Both Ellington and fellow rookie Stepfan Taylor ran well against the Falcons.

Whoever is out there as the big back along with Ellington, they won't be taking snaps from the slightly built former Clemson star. He has earned the right to have 15-20 touches per game from here on out, and he could be instrumental in breaking a solid Texans defense.

Houston has only 20 sacks on the season, tied for 21st in the NFL. But its front seven is as good as just about any in the league, including defensive ends Antonio Smith and the great J.J. Watt (who will be a problem if Paul Fanaika cannot stand his ground).

The key here will be using extra linemen whenever possible and feasible. In past weeks, that has meant backup tackle/guard Nate Potter coming in to help. But with starting left tackle Bradley Sowell missing practice with an illness this week, Potter could be thrust into starting blind-side duties.

It would likely be up to right tackle Bobby Massie to play the role of the sixth lineman if Potter starts in place of an ill Sowell.

New tight end Jake Ballard could also see a few blocking snaps as an H-back if he's comfortable enough with the playbook -- he was a solid blocker during the 2011 season with the New York Giants. Despite missing a year and a half of football, he could be better off the bench than Rob Housler or Jim Dray in the blocking department.

Side note: Check out how Ballard can help the offense right now over at Bleacher Report.

It could be a very long day for cornerback Jerraud Powers if he's stuck on wideout DeAndre Hopkins. Powers has struggled all season covering anyone, let alone speedy receivers bigger than he is.

Through Week 9, Powers is ranked 90th out of 107 corners with a 107.2 passer rating allowed. Quarterbacks have completed 64.7 percent of their passes when throwing to his man for two touchdowns -- he has yet to pick off a pass this season.

A rookie and former college teammate of Ellington at Clemson, Hopkins has 31 receptions for 470 yards (15.2 YPC) and 2 touchdowns this season. Both of his touchdowns gave Houston the lead in a game, including a game-winning overtime highlight-reel grab from Schaub against the Tennessee Titans.