Cardinals vs. Seahawks: 3 keys to an Arizona Week 16 win over Seattle

Three keys to the Cardinals success on the road this Sunday and a matchup to watch against the Seahawks.

Share All sharing options for: Cardinals vs. Seahawks: 3 keys to an Arizona Week 16 win over Seattle

At 9-5, the Arizona Cardinals still have a chance at the playoffs if all the right things happen. There are too many different scenarios to go over here, but just know it's a long shot.

As for the upcoming game with the 12-2 Seattle Seahawks, it is shaping up to be one of those season-defining games for the Cardinals. They win, and they are legitimized; they lose, even by a close margin, and they are a good home team that can't get it done on the road against good teams.

Well, guess what? Seattle is the best team in the NFL this season -- especially at home, where quarterback Russell Wilson is 14-0 over his first two seasons.

Here we go anyway with three keys to beating the Seahawks in Seattle.

Note: We'll be doing things a bit differently this week. We're going to start with the matchup to watch, then get into the keys so the final key ends it.

An unbelievable eight players had at least a half sack, and no one had more than a full sack.

Carson Palmer dropped back 54 times and was under pressure on a disturbing 31 of them (57.4%). The only lineman who didn't allow a pressure was center Lyle Sendlein. Everyone else gave up at least two, and the tackles, Bradley Sowell and Eric Winston, combined to surrender 19 by themselves. Eleven Seahawks defenders recorded multiple pressures of Palmer, including six members of the starting front seven and the entire second-string defensive line.

If the Cardinals intend on winning this game, the offensive line cannot allow pressure at that rate. The protection of Palmer has been better of late, but Sowell and Winston still struggle to hold the edge consistently. Whether they can hold off Seattle's rotating quartet of defensive ends will be something to watch on Sunday.

Stick with the run game

An easy way to get beaten by the Seahawks in Seattle is by abandoning the run. When they know an opponent is dropping back to pass, they pin their ears back and unleash that nasty pass rush.

Giving in to the defense gives that secondary more confidence than it already has -- and we all know Richard Sherman is already the biggest loudmouth in the NFL.

Let's use the Tampa Bay Buccaneers as an example.

It's halftime of Week 9, and Tampa Bay, behind 14 called run plays, scored 21 unanswered points in the second quarter. They are up 21-7 at the break -- in Seattle, mind you -- and only gave up a score because of a penalty aided drive toward the end of the half. The Buccaneers ran the ball 21 times in the first two frames and 10 more times in the third while trying to protect a double-digit lead.

But the Bucs defense couldn't hold up, and the lead started evaporating. The play-calling changed, and the offense ran just five times in the fourth quarter, sealing Tampa's fate. The Seahawks tied the game to send it to overtime, where they won it with a Steven Hauschka field goal.

Running the ball did not work at all against Seattle in Arizona's first meeting with the NFC West division leaders. Rookie Andre Ellington had his worst game to date, with three carries for three yards. Rashard Mendenhall wasn't much better, carrying 13 times for 22 yards and a touchdown.

The play-calling, as well, was far too aggressive the first time around. Palmer threw the ball 45 times and was sacked a career-high seven times.

The offense has come a long way since these two teams last met, and a lot of that has to do with the play of Ellington. His emergence in the offense has opened up a lot of different avenues for Palmer and the receivers.

In fact, the team is undefeated since the Seattle game when Ellington plays (remember, he sat out in Philadelphia). He has eight games with at least 10 touches this season, including six in a row.

More than Ellington is needed, however. Mendenhall must pound out the tough yards to wear down the Seattle defense. His effectiveness this week won't be judged by yards gained or even yards per carry. He will be effective if he has 15 to 20 carries right up the gut.

He's built like a workhorse back, and that's just what he needs to be this week. Pound the middle repeatedly and let Ellington do what he does on the edge.

This goes for both the offense and the defense, but we'll start with Palmer and Co. Over the first seven games of the 2013 season, Palmer was not very successful on play-action passes. The first Seattle game (Week 7, Game 7) is where things started turning around for the play-action passing game, though it still wasn't great.

Palmer missed many opportunities off play action against the Seahawks because of Seattle's pass rush.

The following three screen grabs show one example of what might have been for Palmer and the offense had the line done a better job protecting him.

This play is from the first drive of the game. Arizona had moved the ball successfully, gaining two first downs before running into trouble. The drive stalled after this 14-yard sack by defensive tackle Tony McDaniel. 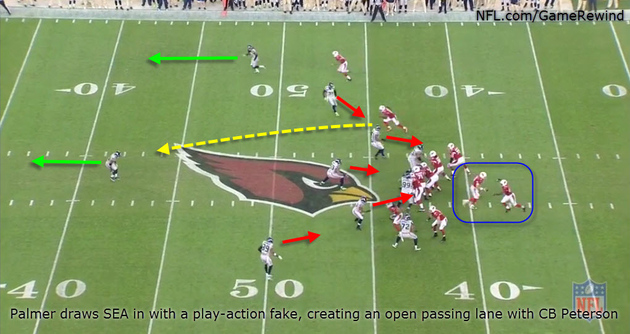 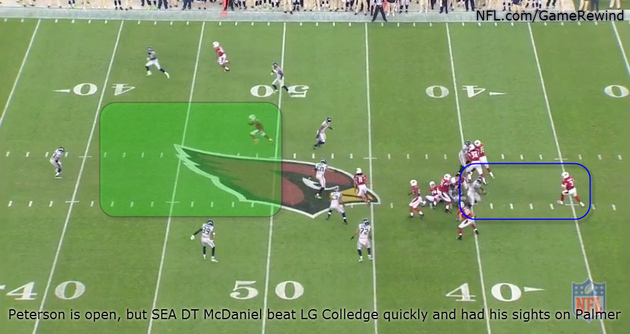 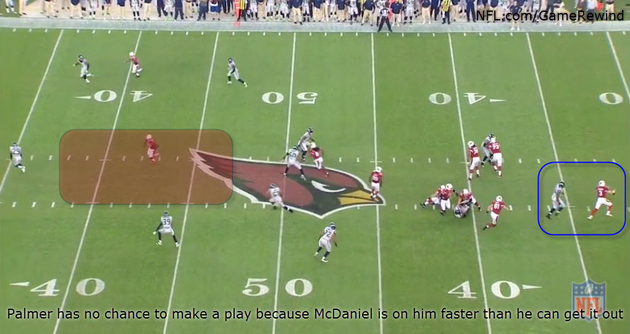 As for the defense, they'll have to deal with Russell Wilson as best they can. He has the fourth-highest passer rating off play-action passing this season, at 120.3, and the Seahawks run a higher percentage of plays off play action (33.8%) than any team in the NFL.

That's because of their rushing attack. They have the luxury of an every-down back in Marshawn Lynch; it seems he creates at least three highlight-reel runs every week of the season.

The threat of the run makes it easy for Wilson to fake the handoff and find an open receiver -- especially on designed rollouts.

Play action worked to near-perfection the first time around against the Cardinals. Wilson utilized PA on 16 of 34 dropbacks (47.1%) in Arizona, completing 7 of 11 passes (63.6%) for 100 yards and a touchdown.

Arizona's defense has been steadily improving at defending the run this season, and they now have the No. 2 unit in yards-per-carry average, allowing just 3.6 YPC. Slowing down Seattle's rushing attack is a good start to slowing Wilson's play-action passing game, though it will be tough to stop both.

It may have to be a shootout in order to win this one.

Be ready for a battle

There are no stats to accompany this one -- this is simply the most important key of the week. This is a call to arms for the men in Cardinal Red and White. Everyone on the sideline, in the booth, in the training room and in the equipment room -- everyone.

This is your time to be world-beaters.

What better time to make a statement to the NFL that you're playoff contenders than to go into "12th-man territory" and beat the best home team in the league? No one has beaten the Seahawks in Seattle since the 49ers did it on December 24, 2011.

This game comes with a soundtrack. It's a song from a Viking metal band called Amon Amarth. We Shall Destroy is its name -- give it a listen.

This is the mecca of NFL road games, Cardinals; it's the toughest game you'll play all season. The Seahawks will not roll over because they're in the dance already. They'll punch you, bite you and kick you until everything hurts. Then they'll drop the hammer that is Marshawn Lynch on your head.

How badly do you want to make the playoffs?