So much for classy Seattle fans

Maybe that isn't the case.

After the Cardinals upset the Seahawks in Seattle 17-10, Washington State representative Joe Fitzgibbon was not only upset, he tweeted something ugly about Arizona. 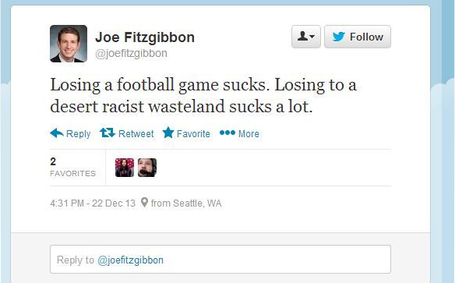 The tweet obviously was deleted quickly, but not before numerous media outlets caught wind of the rant by the politician that represents the 34th District, which includes West Seattle.

Is Arizona a desert? Yes. Are there racists? Yes. Is he the first person to say that Arizona is racist? No. Is it a wasteland? That part depends on the person. All I know, being an Arizona native, if it were such a wasteland, would so many people flock here during the winter months? Probably.

Classy fans in Seattle? I guess not -- at least they aren't all classy.