49ers vs. Cardinals: 3 keys to an Arizona Week 17 win over San Francisco

Three keys to the Cardinals success in the regular-season finale this Sunday and a matchup to watch against the 49ers.

Share All sharing options for: 49ers vs. Cardinals: 3 keys to an Arizona Week 17 win over San Francisco

If before training camp began you believed the Arizona Cardinals would be fighting for the final playoff spot on the final day of the regular season, go ahead and give yourself a high five. There is a very good chance none of you reading actually gave yourself a high five because, while you may have been among the few who truly believed they would be where they are now, you would have looked like a fool doing it.

And that's okay. Your kids think you're weird enough already; no need to add fuel to the fire.

Anyway, this week, the San Francisco 49ers come to University of Phoenix Stadium having locked up a playoff spot last Monday, and they would love nothing better than to ruin any chance the Cardinals (10-5) have at the playoffs.

The 49ers (11-4) won the last meeting between these NFC West arch rivals, 32-20, in San Francisco. Arizona had cut the lead to 22-20 nearing the fourth quarter and was driving and within field goal range, but a Larry Fitzgerald fumble killed all momentum and proved to be the turning point in the game.

Turnovers will be among the keys this week. Here are the others.

Much of Arizona's success this season is predicated on whether it generates turnovers and limits its own. This season, the Cardinals are 6-0 when they win the turnover battle, 2-2 when it's a draw and 2-3 when they turn the ball over more than they take it away.

The same can be said about the 49ers, who are 6-1 when winning the turnover battle, 5-1 when it's a draw but 0-2 when the opposition forces more turnovers than they create.

Impressively, the Cardinals have overcome early turnovers to win two games with a minus-two turnover margin -- last week at Seattle and Week 10 at home against Houston.

Carson Palmer must protect the ball this week. Throwing four interceptions and winning a football game doesn't happen very often. In fact, Palmer is one of three quarterbacks in franchise history to throw four picks in a game and win, joining Boomer Esiason (1996) and Charley Johnson (1964).

The good thing for the Cardinals is that the running backs have been solid at protecting the ball this season. Rashard Mendenhall and Andre Ellington have lost two fumbles between them -- Mendenhall losing both.

In the last meeting between these two teams, the Cardinals had 11 plays of 10 yards or greater, including two of 50-plus yards. Most of those (eight of 11) came via the passing game, but the running game had success against the 49ers defense as well.

Ellington had great success in San Francisco, carrying seven times for 56 yards (8.0 YPC) and a touchdown. He had two rushes of at least 10 yards, and all of his carries gained at least four yards. Big plays are his forte, and he could be the catalyst that drives the offense this week.

This season, Ellington is 12th among running backs with 24 carries gaining at least 10 yards. That is more than double that of Mendenhall (11), who does the dirty work up the middle while Ellington slashes and gashes defenses in relief work.

Ellington also gains big yards in the passing game, as he is 10th among RBs with 14 receptions of at least 10 yards.

Getting him involved in the offense works to near perfection, as the Cardinals are 8-1 this season when he has at least 10 touches in a game. That includes last week's monumental upset of the Seahawks. Doing so again this week gives Arizona a better chance to succeed on offense.

The Cardinals cannot allow 49ers quarterback Colin Kaepernick to beat them with his legs. If he gets loose, he can destroy a perfectly good defensive drive.

It happened in these teams' first meeting. Though it was just once, Kaepernick's 17-yard scramble on 2nd-and-18 in the second quarter nearly led to a scoring drive. Only safety Yeremiah Bell's interception three plays later saved the drive.

Containing Kaepernick means one of either Karlos Dansby or Daryl Washington must spy him at all times. Failing to do so provided Kaepernick with all the space he needed on the aforementioned play. Check out the voided second level below. 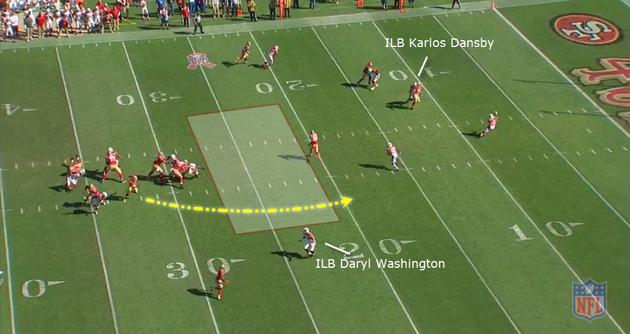 Coordinator Todd Bowles brought five on a blitz, and the rush was ineffective. That cannot happen this time around. Blitzing is fine when it works, but blitzing and dropping both inside linebackers into coverage is just asking Kaepernick to beat you.

By now, it's no secret that Patrick Peterson has struggled in coverage of 49ers wideout Michael Crabtree. In four career games, Crabtree and his quarterbacks have hooked up 17 times on 22 targets (77.3%) for 286 yards, four touchdowns and no interceptions for a 158.1 passer rating against Peterson -- all four touchdowns came last season.

Peterson has had a good season in coverage and earned first-team All-Pro recognition for it, according to Bill Barnwell of Grantland.

That's a great honor for Peterson, but he will be tested against Crabtree. These two teams are very evenly matched, and it may come down to a play being made by one of these two players. Who can make the play?

This will be fun to watch.

All stats provided by Pro-Football-Reference.com and ProFootballFocus.com