49ers vs. Cardinals: Stats, history, connections and other facts

A look at and into the matchup.

Share All sharing options for: 49ers vs. Cardinals: Stats, history, connections and other facts

By now, you should know that the Arizona Cardinals are hosting the San Francisco 49ers in Week 17 and that they must win and get some help to make the playoffs. Before the game, let's look at some of the facts with the matchup.

Here is the breakdown of the stats between the two teams. 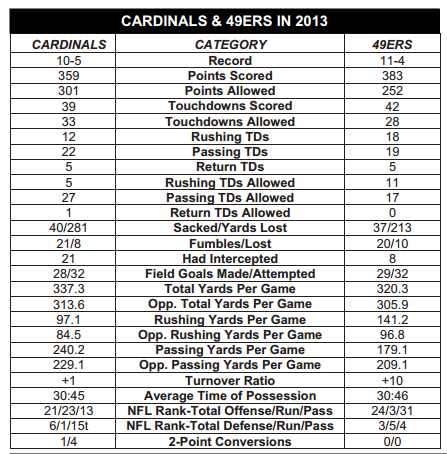 San Francisco 49ers QB Colin Kaepernick has had an uneven season, but he has completed over 58 percent of his passes for 2887 yards, 19 touchdowns and eight interceptions for a passer rating of 89.9.

Arizona's Carson Palmer has completed just under 64 percent for 3867 yards, 22 touchdowns and 21 interceptions for a passer rating of 83.4.

In the rushing game, Frank Gore leads the Niners with 1114 yards and nine touchdowns.

Arizona is led in rushing by Rashard Mendenhall's 640 yards and eight scores. Andre Ellington has rushed for 622 yards and three scores.

As for receivers, Anquan Boldin leads San Fran with 76 receptions for 1030 yards and six touchdowns. Vernon Davis has 12 TD receptions.

Arizona is led in catches and touchdowns by Larry Fitzgerald with 76 and 10. Michael Floyd leads in yardage with 950 yards.

San Francisco has dominated the series. They are 27-17 all time against Arizona. They have won sight of the last nine matchups. Arizona has fared a little better at home -- 9-12. They met for the first time in 1951. IN their first meeting in 2013, the Niners beat the Cardinals 32-20. It was 22-20 in the fourth quarter and the Cardinals were in position to take the lead with at least a field goal, but a Larry Fitzgerald fumble ended that drive and San Francisco responded with an 18-play touchdown-scoring drive to extend the lead. An Alfonso Smith fumble ended the Arizona rally and any chances of winning.

In 19 career games against the 49ers, Larry Fitzgerald has 106 catches for 1489 yards and 12 scores, including nine in the last 12 meetings.

Darnell Dockett has seven sacks against San Fran, the most he has against any team.