Rams vs. Cardinals: 3 keys to an Arizona Week 14 win over St. Louis

Three keys to the Cardinals success this Sunday and a matchup to watch against the Rams.

Share All sharing options for: Rams vs. Cardinals: 3 keys to an Arizona Week 14 win over St. Louis

The Arizona Cardinals can ill-afford another loss within the division. With the St. Louis Rams coming to town this week having won two of three, now is not the time to mess around on the field. If the team plays this week as they have in four of the past five games, it should have no trouble dispatching the Rams.

The fact that quarterback Carson Palmer is on the injury report and admitted on Thursday that the elbow injury he suffered on the third play of the Eagles game affected him the entire game is worrisome.

Watch the GIF here in case you missed the play.

Carson Palmer didn't throw as much as other QBs in open portion of practice. Elbow covered by sleeve. #AZCardinals

Palmer said injury did impact him rest of the Eagles game. #azcardinals

Not having seen backup Drew Stanton for even a snap this season, no one truly knows what -- if anything -- he can bring to the offense in lieu of an injured Palmer. With all due respect to Stanton, hopefully Palmer is okay and will start on Sunday.

Here are three keys to Arizona's success against the Rams.

Running back Rashard Mendenhall has 130 yards rushing over the past two games. That's his most over a two-game stretch since the final two games of the 2011 regular season when he rushed for 154 yards (albeit one of them was a 100-yard performance).

Rookie back Andre Ellington missed the game last week with the knee injury he suffered during practice the week before, and his status for Sunday is unknown. But with the way Mendenhall has carried the ball lately, it may not be dire to rush the rookie back into action -- especially with fellow rookie Stepfan Taylor holding his own in the situations he's been given.

Head coach Bruce Arians gave Mendenhall 18 carries in Ellington's absence, a season high and the most since carrying 18 times in that 100-yard game in Week 16 of 2011.

For all his early-season struggles, he has turned a corner (pardon the pun) and turned his season around. He has made up for missing many wide-open running lanes by rarely missing one the past two weeks. The Philadelphia game was his best since his pre-ACL-tear days, and it's not really close.

The screen shot below illustrates Mendenhall's re-found ability to see and hit the correct running lanes. Though this is just one play, there are many more like it from last week's action (check my Twitter media timeline for the rest). 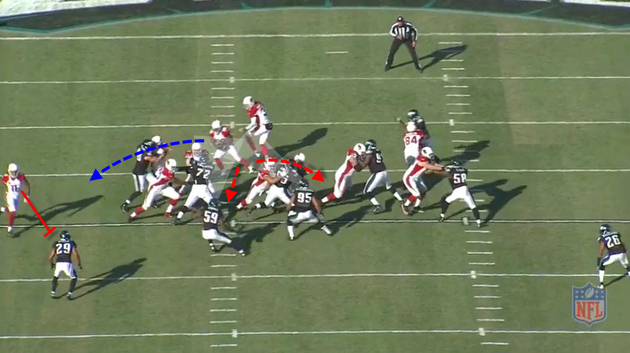 Mendenhall has had issues this season bouncing plays outside when it was unnecessary. This time, however, it was the right move and went for a gain of five off right end.

P.S. This jumbo set with backup right tackle Bobby Massie was very successful against the Eagles. With Massie and tight ends Rob Housler and Jim Dray all in the game in the big package, Mendenhall carried eight times for 53 yards (6.6 YPC), including six of his eight carries for five yards or more.

Last week in Philly, the offensive line surrendered five sacks and allowed 19 total pressures on Palmer's 46 drop-backs (41.3%). It doesn't matter which quarterback starts against the Rams and their ferocious pass rush. Whoever it is will have a bad day if he is under pressure from the blind side all day.

This week, Arizona's line must deal with the Rams and their 37 sacks (fifth-most in the NFL). Sowell and defensive end Robert Quinn will face each other most of the afternoon. Against Levi Brown (you remember him), Quinn sacked Palmer three times, greatly impacting the game throughout.

This season, Quinn has generated a QB pressure once every 5.5 pass-rushing snaps -- 70 total pressures on 387 rushes. This is a potential problem if you play quarterback for the Cardinals.

Patrick Peterson and his lack of punt-returning prowess of late is rubbing a lot of fans the wrong way. Among 31 players with at least 10 punt returns this season, Peterson is tied with Darren Sproles for 26th, averaging 6.68 yards per return. He is sixth with 28 returns and 18th with 187 yards.

Fans have been calling for a change since last season, wondering who will get a chance and when. Of late, rookie Tyrann Mathieu has been the subject of forum debates.

Should he replace his good friend and mentor as the punt returner? Should Arians put them both on the field and see what happens?

It's time to see that explosiveness from Peterson that helped him to a first-team All-Pro selection on special teams as a rookie. It isn't as though the talent is suddenly gone.

But in the event that it is, Mathieu could be the spark the team needs on special teams.

Do not be afraid of Rams cornerback Janoris Jenkins. You remember him, right? He's the guy who picked off Ryan Lindley twice last season in this game, taking both to the house in a 31-17 St. Louis beatdown of Arizona.

They were two of the worst passes anyone has ever thrown in NFL history. Ever.

This season, Jenkins is one of the worst cover corners in the game. He's allowed 46-of-76 passing (65.7%) for 623 yards, six touchdowns and one interception for a 116.5 passer rating to opposing quarterbacks.

His passer rating allowed is among the highest in the NFL, and he's one shy of three players for the most touchdowns allowed this season.

Given the fact that St. Louis cornerbacks generally stick to one side of the field rather than shadowing receivers all over the field, Jenkins will be matched up with pretty much everyone throughout the game. Palmer -- or Stanton, depending on how the injury situation goes -- must find him and target him regularly, because he can be had.

He is an aggressive corner who loves to jump routes, and it bites him in the behind at times. Double moves FTW.

All stats provided by Pro-Football-Reference.com and ProFootballFocus.com