The Cardinals rank low in the NFC West positional rankings across the board going into the 2013 season.

Share All sharing options for: Thoughts On The NFC West Offensive Positional Rankings

Recently, ESPN's NFC West blogger Mike Sando and guest Matt Williamson published their positional rankings for the division, ranking each position (group) in order of one to four for each team, here is a snapshot of what they look like: 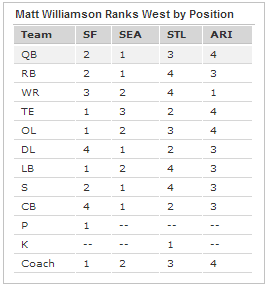 As you can see, Matt isn't a big fan of the Cardinals roster in comparison of the rest of the division, but are these rankings truly fair? Are they an accurate representation of the division? Well, lets take a look at the offensive positions...

I think we can safely say, that for the last few seasons, the Cardinals have had horrific quarterback play, and in recent times, the rest of the division have found potential All-Pro players at the position, in Colin Kaepernick, Russell Wilson and Sam Bradford. The Cards made the move for Carson Palmer, giving them a fighting chance, however, I would still rank Kaepernick (2) and Wilson (1) at the top of the list. Bradford versus Palmer. That is up for debate. Now Bradford has had some consistency in terms of coaching, and they're starting to add some pieces around him with offensive tackle Jake Long and tight end Jared Cook, with a first round talent wide receiver, he has something to work with. Palmer has a shoddy offensive line (which will be upgraded with the seventh overall pick, it has to be) but some very attractive targets in Larry Fitzgerald, Michael Floyd and Andre Roberts. The edge, for me anyway, would go to Palmer, only because he has more to work with and is a proven commodity in the league, but I do feel Bradford is set for a breakout campaign.

Williamson seems to feel the Cards actually have a better running back situation than the Rams at this moment in time, which I would agree on. They have Rashard Mendenhall, the only proven back between the teams, with the rest of their respective depth charts being inexperienced backs. As guessed, by most of you, the 49ers (2) and Seahawks (1) sit atop of the NFC West hierarchy, which is a recurring theme. The combination of Frank Gore and LaMichael James for San Fran, along with Marshawn Lynch and Robert Turbin for the 'Hawks I think fairly puts them ahead, we're talking about some of the better tandems in the entire league. The Rams with Isaiah Pead and Daryl Richardson have some nice second year pro's in place who could be ready for a breakout year, but need a bigger back to help push the pile and be effective in blocking. The same can be said for the Cardinals. Ryan Williams coming off his second season-ending injury in successive seasons, he could be primed for a breakout campaign, if he keeps himself on the field. I fully expect it to be an open competition for the starters job in the desert.

To a chorus of cheers, the Cardinals actually rank number one in a category. This is largely down to a division lacking in star receivers, all excepting the legend that is, Larry Fitzgerald. An argument can be made for Harvin following his trade to the Seahawks, but he doesn't stack up against Fitz. In addition to Larry, the Cards have 2012 first round pick Michael Floyd who is expected to make a drastic improvement in 2013, along with Andre Roberts, coming off his best statistical season for the Cards (64 receptions, 759 yards and 5 touchdowns, his career best in each category). The 'Hawks rank second in the division, with newly acquired Harvin. Some nice pieces in place over in the North-West, in Sidney Rice and Golden Tate, makes for a well rounded core. The Niners and Rams have no real outstanding target (besides Michael Crabtree) and would need to target a WR early in the draft if they wish to climb the rankings.

This a relatively poor area in the division, outside of Vernon Davis of the Niners. Luckily for the rest of the teams in the division, this is a nice draft for the tight end, with some very attractive depth into Day 3, whether it is Gavin Escobar, or Jordan Reed, some options there. The Rams recognised this, and rocketed themselves up to number two in the division at the position, by securing free agent Jared Cook from the Titans on a long term deal. One of the better tight ends in the league, and gives them a dynamic option down the seam. Onto the Cards. Cutting the perennially injured Todd Heap created a hole on the depth chart. Rob Housler has shown flashers during his tenure in the league, and projects well as a receiving tight end with breakaway speed, but every team in the division should be targeting a tight end in the draft for depth.

We aren't going to fool anyone, of course this is our weakness. The Cardinals will likely address the line with the seventh overall pick in the Draft, which would bring in an elite prospect to improve that line. The Niners & 'Hawks have very capable offensive lines, that may need some depth via the draft but they are some of the better groups in the league. The Rams too had a poor offensive line, but managed to sign former number one overall pick of the Dolphins Jake Long to start at lefgt tackle, giving Bradford that all important protection. The Cards are rightly ranked the worst in the division (if not the entire league) but I expect this to be rectified in the near future. A Lane Johnson or Eric Fisher will surely be available at 7, giving the Cards a franchise left tackle. A little rearranging to incorporate everyone is needed but will only make the group stronger.