The draft will be held from Thursday, April 25 to Saturday, April 27 at Radio City Music Hall in New York City.

The draft will be televised by both ESPN and the NFL Network. ESPN and NFL Network media have indicate they will not tip every pick on Twitter.

How about a lovely graphic? 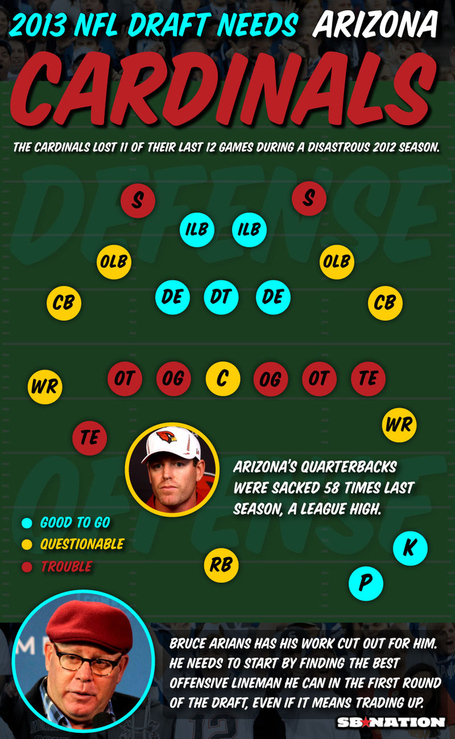 Offensive tackle - Arizona had major issues along the offensive line last season, including a void at both right and left tackle. The Cardinals will get a boost with Levi Brown returning from injury, but tackle remains a need heading into the season. The 2013 draft is deep on tackles, but the top few may come off the board before Arizona picks at No. 7.

Outside linebacker - Daryl Washington is among the best inside linebackers in the NFL, but Arizona didn't get much production from either outside spot. Sam Acho,Quentin Groves and O'Brien Schofield combined to play the majority of OLB snaps, but Arizona could use one, if not two more outside 'backers.

Safety - Adrian Wilson and Kerry Rhodes are gone, leaving the Cardinals in search of two new starting safeties. The Cardinals re-signed Rashad Johnson this offseason, but could draft a safety early to step in as a starter from Day 1.

Here is where the Cardinals will be picking so far, providing there are no trades.