Caption This! #1: The Third Competition

It's time for the third annual Caption This! contest to take place.

Share All sharing options for: Caption This! #1: The Third Competition

While we wait for August to roll around, we could all use a little entertainment to take the place of football. This is where Caption This! steps in. As those of you who have taken part in the last two may know, Caption This! is a contest that runs through the off-season, ending right before the regular season starts.

The competition has been successful the last two years, so we've decided to bring it back. Every Sunday, you'll be provided with a picture related to the Cardinals. Your job is to come up with a witty, funny, clever, etc. comment that fits the scenario. The victors of each weekly round will then be added to a Table of Winners, and at the end of the season, we'll announce the champion.

The last two years have been won by AlaskanCard, who took home 52 votes in total by the end of last off-season's competition. Can he be unearthed?

The official rules to Caption This!: 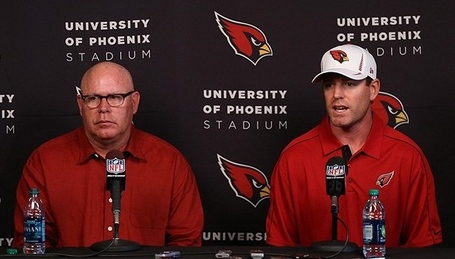