Tyrann Mathieu, Javier Arenas, Alex Okafor and their role in how the Arizona Cardinals defend the read option

The versatility of these three offseason acquisitions could be key to slowing Colin Kaepernick, Russell Wilson and the offenses that cater to their skillsets.

Share All sharing options for: Tyrann Mathieu, Javier Arenas, Alex Okafor and their role in how the Arizona Cardinals defend the read option

One of the more intriguing debates this off season has centered on whether or not the read option in the NFL is a sustainable offense.

The Cardinals play in a division with two of the better read option quarterbacks in the NFL, meaning at least one quarter of their schedule every year, for the foreseeable future will consist of trying to contain Colin Kaepernick and Russell Wilson.

When I go back and look at the Cardinals off season acquisitions, it seems to me that they had stopping those offenses in mind when it came to personnel decisions that were made, namely adding Tyrann Mathieu, Alex Okafor and Javier Arenas.

As I've been dissecting the best ways to "contain" the read option, I was drawn to an excellent article from a 2009 New York Times article by Pete Thamel, talking defense with TCU Head Coach Gary Patterson, and this was what stuck out too me:

Patterson's base defense consists of four down linemen, two linebackers and five defensive backs. Many teams have gone away from four-man defensive lines and have added a linebacker for a 3-4 alignment, but Patterson chooses to keep the front stout and the back end of the defense flexible.

It is a simple concept for a complicated challenge.

"You've got to spread out with them," he said. "We try to coach defense like coaches coach offense."

Patterson's theories on slowing down the spread quickly come back to speed.

"If the defensive end is fast enough to be able to play the running back or the quarterback instead of some other person on your defense, that frees up a guy," he said. "If nine guys out of your 11 can run somebody down, it always helps."

The Cardinals have talked about continuing to utilize their 3-4 defensive system, but the premise that Patterson discusses is what's important, and that's being stout up front and able to run and move in the back end.

Why are Mathieu and Arenas such important pieces to this defense? Let's take a look. 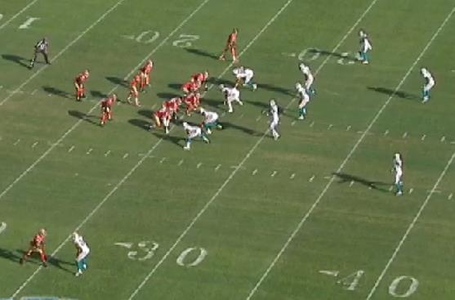 Late in the season, as Colin Kaepernick was reaching his zenith, we saw the inventiveness of the 49ers offense come to life.

One of the things they started doing was using was a pistol full house backfield, or what the 49ers refer to as the "Bug eye formation".

This formation allows Kaepernick to survey the defense and make a call as to go run or pass.

Kaepernick sees that the Dolphins are in their base 4-3 defense and takes advantage moving Delanie Walker out of his backfield position into a slot wide receiver. 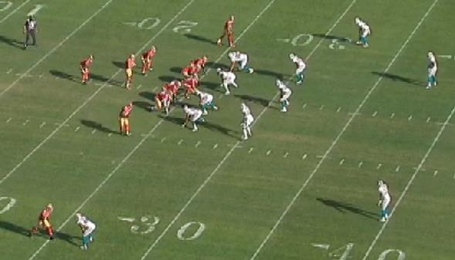 This immediately gives the 49ers an advantage because they now have Walker or Vernon Davis, whoever they decide to flex, in a mismatch with a linebacker.

Why are Arenas and Mathieu important to combating this? Simple, they both are versatile and effective in the slot playing versus the run or the pass.

If the 49ers flexed either of the up backs in their full house it won't cause the Cardinals to scramble on defense, they'll be able to move either Arenas or Mathieu into coverage without having to sacrifice much against the run or being at a disadvantage against the pass.

The result of the play was an easy 20 yard completion to Walker as the linebacker was left grasping at air in coverage.

What happens if the 49ers decide to run out of the formation? 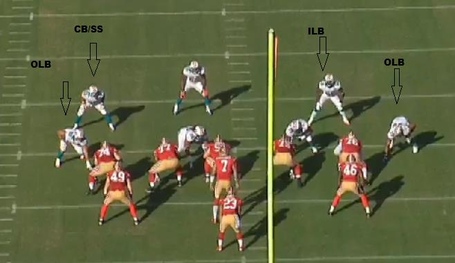 Here we see the same formation without the flex this time, walking the extra corner or the strong safety into the box, and obviously having at least one of the defensive ends as an OLB and possibly both, the flexibility that a guy like Alex Okafor affords a team, changes the scheme, but likely not the alignment.

If the Cardinals are using Mathieu/Arenas/ the strong safety as interchangeable pieces, something that the new defensive coordinator will need to do in my opinion to get the most out of their newly acquired talent, it gives them a strategic advantage.

The player that would be the nickel back in this scenario is left unblocked, but is unable to get through the opening and make a play.

What Mathieu/Arenas offer to combat that, is the ability to close on the ball, and run down plays and make tackles.

Two of the more sure tacklers for their positions, at least Mathieu was in his last season in college, they aren't afraid to knife through and stick their nose in to make play on a ball carrier.

Having the ability to combat the read option, but also to be able to match up personnel wise with the passing game out of the sub packages the 49ers use, is important.

What happens when we see basic read option plays from teams like Carolina and Seattle this season though? 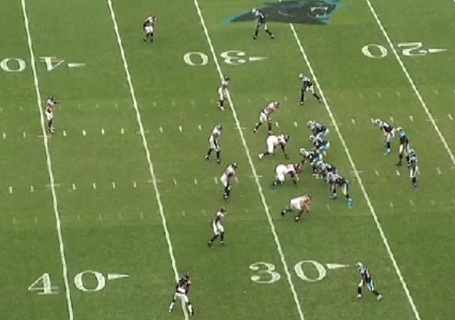 We see Carolina giving the Cardinals a basic two back set with three wide, they motioned DeAngelo Williams into the backfield from a slot position, meaning the slot corner on the single wide receiver side is left on an island.

In the Cardinals defensive scheme the players identified above will have the quarterback on any keeper, and all of them are walled off rather easily in the play.

This is Arenas' and Mathieu's ability to play near the line of scrimmage while being effective against both the pass and the run will be an intriguing early storyline to watch.

If they can take on blockers or get around blockers and make plays in the open field against the quarterback it will take the pressure off the linebackers getting to the scrape on the read option as the defensive end/outside linebacker crash on the running back.

While the Cardinals won't see a "read option" team until Week 5, and hopefully Daryl Washington's legal troubles will be behind him, they drew the unlucky proposition of having to face seven teams with quarterbacks that can run the ball in their last twelve games.

Having weapons at their disposal that could possibly counter those offensive attacks will be an early indication of just how creative new defensive coordinator Todd Bowles will be, and based on their off season moves, it is something that the new regime had in mind when putting this team together.