Rob Housler poised to shine in Arizona Cardinals offense in 2013

A look at how Bruce Arians uses his tight ends and how Housler fits in nicely.

Share All sharing options for: Rob Housler poised to shine in Arizona Cardinals offense in 2013

When Bruce Arians came to town in January I talked about how the Arizona Cardinals offense was going to change, and wondered if Arians vertical attack was the right fit for the Cardinals personnel.

Well nearly four months and 50 players later, the Cardinals roster is completely different from that of what Arians inherited in January.

The Cardinals added the big armed Carson Palmer, a savvy veteran that can get the ball down field into tight spots consistently and accurately, and does it quickly, meaning the Cardinals offensive line should improve statistically, even if they aren't necessarily leaps and bounds better (I am not saying they will or won't be good along the line next year, but I am saying that Palmer's ability to process plays and get the ball out is Warneresque).

In four seasons in Pittsburgh, data available with a paid account to Pro Football Focus, Heath Miller averaged 80 targets per season and just over 54 receptions per season.

You may be thinking that's not much, but take into account that every Arizona Cardinals tight end combined from 2008-2011 caught 137 total passes.

What does that mean for Rob Housler going forward and how will the Cardinals super athletic tight end be utilized in the Arians vertical attack? 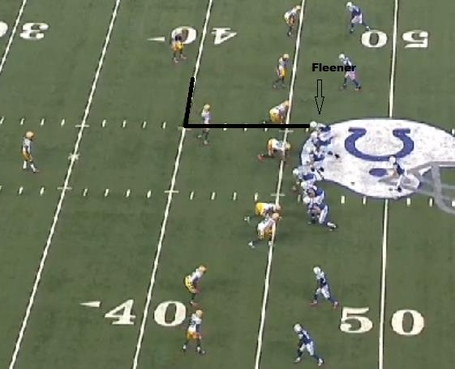 On a short 3-3 we see the Colts go to a four receiver, empty back set, an Arians favorite.

Fleener is at the sticks for Luck, despite coming up short as he worked his way back with pressure coming after Luck. 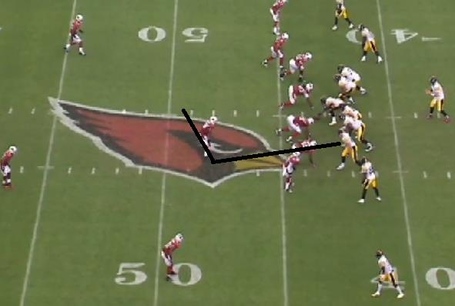 Another four wide, tight end slightly split, on 2-12 and we'll see the Steelers get every one of the wide receivers deep into their routes, 10+ yards down field, and as soon as the quarterback is moved off his drop because of pressure, he's looking for Heath Miller short and in the middle of the field.

This results in a big 17 yard gain as Miller is able to get past Daryl Washington and get the first down.

We'll see a lot of Housler on short routes into the middle of the field in order to get the quarterback a safety valve on the vertical routes on the outside. In fact Heath Miller was consistently getting most of his targets, over 30%, in the middle of the field at less than ten yards, and he was targeted as much as 49% of the time in that area in 2009 and 42% in 2011.

While Housler presents uniqueness as an athlete that Arians hasn't had consistently, Coby Fleener wasn't healthy last season; Arians does like to get his tight ends in space when he has the chance too. 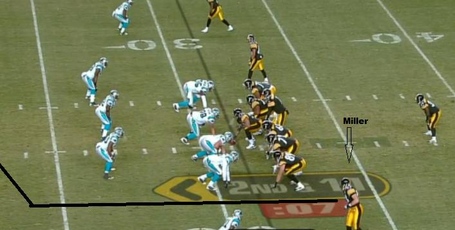 Getting Miller as the third "Wide receiver" on 2-11 in the Steelers offense allows him to be on the short side of the field versus an undersized defensive back.

They run him on a 10 yard slant and it results in a 20 yard gain, and do not forget that Housler is a much better overall athlete than Miller.

Getting Housler deep isn't the only way to get him into space, and that is something we saw a little bit with Fleener last season in Arians offense.

One of the biggest match up advantages Housler will see in 2013 is when he's in a traditional tight end alignment, and gets single coverage by a linebacker.

There's few, if any linebackers that have the size/speed combination needed to run with Housler, who he can't reach over the top of, and when that happens the Cardinals will look to get Housler one on one deep.

In this play we see the Colts using a two wide set with a flanker and Fleener at tight end.

Luck's job is to find where the single high safety is covering, and in this play when he sees that Fleener is left one on one with a linebacker on a wheel route up the sideline, it makes it an easy throw and catch for a long touchdown.

As the safety gets caught settling in to take away Reggie Wayne on the post route, it leaves Fleener all alone with the linebacker trying to run with him.

Housler in space is a recipe for success on two accounts: 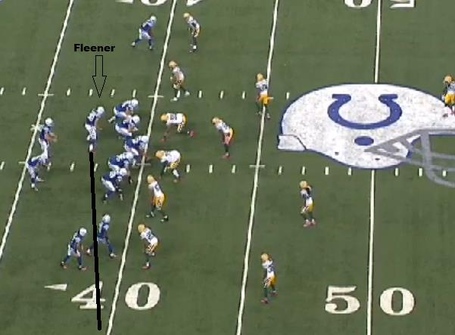 They lined Fleener up as an H-back over the left side, motioned him to the right and back to the left before sending him out into the flat as the rest of the offense flowed to the left.

It leaves Fleener in a situation where there's no defender in front of him for 15-20 yards.

Can you imagine Housler getting the ball at the 40 yard line on a 3-2 with 15 yards of green to get moving?

Those are the match up advantages that can make Housler the dynamic weapon we have all longed to see the Cardinals add at the tight end position.

With Arians at the helm, and Carson Palmer loving to use his tight end as a safety valve, Housler is going to get his chance to shine this season.

It's time for him to take that step.