A breakdown of what we should expect to see from Carson Palmer and company in 2013.

Share All sharing options for: How the Arizona Cardinals will 'flood the field' with their vertical passing game

When Bruce Arians came to Arizona he brought a very special kind of offensive philosophy to the desert with him.

Arians' vertical offense is a system that is not one for the short passing plays, in fact in 2012 Arians and the Indianapolis Colts offense went down the field 20+ yards in the air on over 17% of their passing plays.

One might not think much of a 14% difference in passes over 10+ yards in the air, but if Carson Palmer was to attempt 608 passes like the Cardinals quarterbacks did in 2012, that would be an additional 85 attempts over 10+ yards, or five additional attempts a game into Bruce Arians vertical pass, meaning 5 less check downs per game.

How does the Arians offense work?

Over the next several months we will take a look at the different concepts in the Arians passing game, as well as the concepts in the Cardinals new zone blocking running game.

One of the biggest things about Arians offense is getting multiple wide receivers in the same area at different levels of the field.

With the Steelers we saw multiple formations utilizing different personnel; in this play we see a bunch left with a single split receiver right. In the bunch on the left we have two tight ends, Heath Miller and Matt Spaeth, as well as wide receiver Emmanuel Sanders, with Mike Wallace alone on the left.

In Arians' vertical offensive attack, we will see him flood the right side, or the short side of the field with three wide receivers in order to put pressure on the defense to make a play.

Bringing the running back out of the backfield instead of the second tight end allows the same number of routes to be run, while changing the linebacker keys, mixing up the coverage for the linebackers, which allows the completion to Heath Miller on the intermediate drag route. 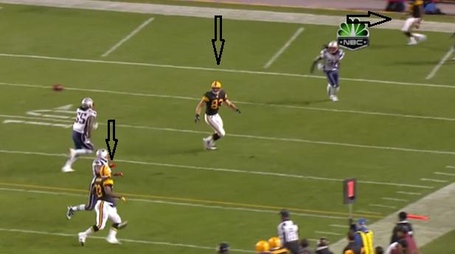 The play goes for 19 yards, and sets up a field goal, but notice that Arians had three routes going over ten yards on this play.

He uses isolation routes on the outside to get Mike Wallace and Emmanuel Sanders deep; if the safeties don't look to help they'll be the play for the quarterback.

In this case both safeties took over the top coverage, leaving linebackers man to man with the tight end and running back.

Putting pressure on the defense to commit to single coverage means that Arians is expecting one of the weapons in the route sequence to be able to beat his man, and that happens here.

Pressure on the Single High Safety

Arians doesn't just put pressure vertically with multiple wide receivers into routes, he does so utilizing traditional looks as well, and making the safety make a play on the ball prior to the ball getting out of the quarterbacks hand. 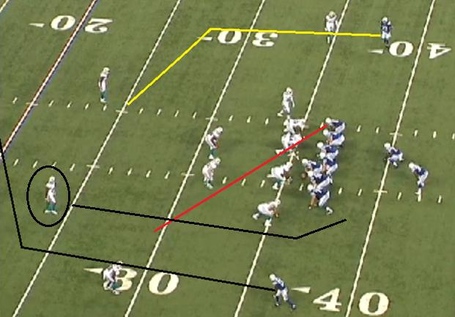 In this sequence we see the Colts again flood the field with a low, middle, high concept, bringing both wide receivers into the middle with post routes, Hilton deeper than Wayne, and dragging Allen across the defense.

On this play we'll see the Dolphins bring a safety off the back end and bring pressure, leaving a single high safety deep, and with Wayne in the 12-15 yard range and Hilton hitting it over the top deep, it makes the deep safety decide whether to take the intermediate or the deep receiver.

We see the safety bite on the middle route with Reggie Wayne, and that leaves the deep route open for Luck, who has a small window to fit the ball in as the corner that was one Wayne sees the ball going deep and gets to the deep ball, but too little too late, as Luck connects with T.Y. Hilton for a touchdown.

These are two of the more common Arians passing concepts we will see, and they both are out of the flood concept of getting three receivers on the same part of the field at three different levels.

Putting pressure on the defense by getting multiple receivers into the same area at different levels requires time for the quarterback, but also the ability to see early what the defense is doing.

In the second set of clips Luck had to identify quickly where the single high safety was going, as soon as he saw him break towards Wayne the ball has to come out.

Is the Cardinals offensive line and quarterback up to their part of the task?

We'll take a look next week.