Las Vegas, and more specifically Bovada, is starting to roll out their 2013 NFL win totals, and our very own Arizona Cardinals came in at a paltry, to some fans, 5.5 wins on the season.

@sethcoxfb They won 5 last year with a crap offense. They can win another one with Palmer

KC and Cardinals fans aren't necessarily wrong with their line of thinking.

If you take 2012 Carson Palmer, and replace the cavalcade of quarterback failures from the 2012 Cardinals with him, you may see a jump in wins for the team.

The problem with this line of thinking is simply this: This is not the 2012 Arizona Cardinals.

This rendition of the Cardinals has so many variables to it that most prognosticators aren't very high with their expectations for the Cardinals in 2013, and I tend to agree with them.

You see, it isn't that the Cardinals have a worse roster, or are a worse team, it's that they are trying to grasp new concepts on offense AND defense, a very good defense mind you.

One of the common misconceptions is that the Cardinals defense will stay at the same level as 2012 if not improve, and that's simply not the given that most are making it out to be.

As we all know Bruce Arians brought his own defensive coordinator to the desert with him, and with that comes a new defensive scheme, one that has the defensive line licking their chops, but has me worried about how well the linebackers will handle their new found responsibility.

Why am I so worried about a defense that was on the upswing in 2012? 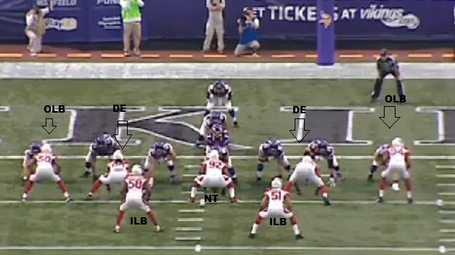 This was the typical front seven we saw in Arizona in 2012. It's really a 5-2 front, with the two outside linebackers standing up over the outside man on their side and two inside linebackers but we know it better as a 3-4 defense.

In this typical front you'll see the goal of the defensive line is simple, maintain leverage in two gaps keep Daryl Washington and Paris Lenon clean so they can see the ball and get the ball.

That means Dockett, or the LDE has a responsibility to occupy both the right tackle and/or the right guard on this specific play, the NT wants to likely occupy only the center, but could look to occupy either guard as well depending on the direction of the run, and the RDE, Calais Campbell, is looking to occupy the left guard and left tackle combo.

Both outside linebackers have outside contain and the duty to pinch down on the outside and not let the tight ends get a clean release, this was a double tight end set so the Cardinals also brought down Adrian Wilson as a "fifth linebacker".

On this run play we'll see all of the defensive line occupy their blocks, but because of the congestion the linebackers aren't clean, except for Wilson who stops Peterson for a two yard gain.

Lenon was actually quite free on this play but his slow reaction time and poor read on his keys left him flat footed and unable to get up into and through the line to make a play.

The defense is set up for the linebackers in the middle to make nearly all the plays, it's not a bad thing, that's just the way the defense is, and it's worked for the Steelers for years.

Again, a look at what the defense was: 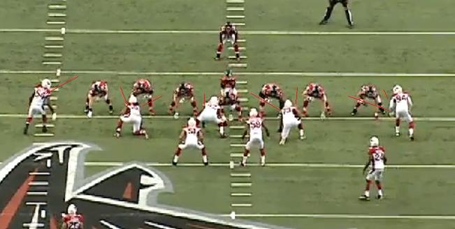 As the play develops, we see what this defense afforded Daryl Washington:

The guard couldn't get to Washington in time to make a play and Washington got into the backfield without a problem.

Also notice again that Paris Lenon is free, but is behind the play and is unable to get into the action, thus why the Cardinals have brought in three different options to replace him, because let's face it, Lenon struggled mightily. 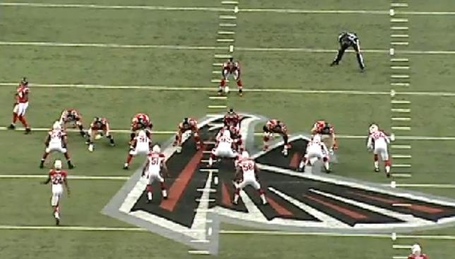 In the 2012 defense you'll see the LDE head up on the tackle, and he has the responsibility of the gap on both sides of the tackle. The NT needs to take on either side of the center, and the RDE will occupy the tackle and get too anything on either side there, a true two gap scheme.

Look at how free both inside linebackers are to get to the hole and make a play.

In the new Cardinals defensive one gap scheme the assignments change.

We'll dive into every player's responsibility as we go through the summer, breaking down exactly how each one will be used, but the simple basis is this:

Each player is assigned a specific gap, and again this is very basic I'll get into the keys for the linebackers, the gap options for the defensive line and more as we go through but I want to get a very broad picture of the difference.

What that does is take away the "see ball, get ball" keys of Daryl Washington and whoever lines up next to him in 2013.

Backside we'll see a NT the weak side A, the RDE responsible for the weak side B and the right outside linebacker with the backside contain.

It definitely empowers the defensive lineman, and specifically guys like Darnell Dockett and Calais Campbell.

The problem is we could see a guy like Dan Williams struggle because he doesn't possess the elite burst off the line of scrimmage to get into the backfield.

The bigger problem for me is going to be how this will change Daryl Washington's effectiveness.

Washington isn't what I would call a physical linebacker; he's more of a wade through, finesse, and attack downhill type.

The switch from the two gap 3-4 defense to the one gap 3-4 defense I believe will have more of an impact on the win loss record in 2013 than anything that Carson Palmer does or doesn't do.

That's why I would be hesitant to throw my money onto the Cardinals winning over six games in 2013, at least until how I see the front seven looks in camp and the pre season.