Share All sharing options for: Best Chance Of Going Worst To First

The 2012 season was a failure for many teams in the NFL, including the Cardinals, so which team in most likely to go from 'worst to first'? 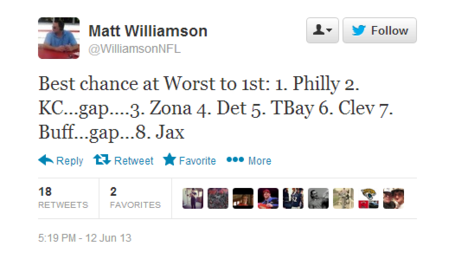 All eight teams finished with the bottom 11 records in the NFL last season, with the omissions of the New York Jets, the Tennessee Titans and Oakland Raiders. Let's assess the teams with the best chance of going from 'worst to first' which we can determine as making the post-season, as the Indianapolis Colts achieved last season.

With Mike Vick (seemingly) back under centre for the Eagles, they should be primed for a bounce-back season in the wide-open NFC East. With a new coach calling the shots in Philly in the mould of Chip Kelly, his supposed offensive structure should fit the pieces in place. Although plagued by injury, their offensive line, fitted with new offensive tackle Lane Johnson, is the most athletic in the league, and are capable of playing in an up-tempo offense. Wide receivers DeSean Jackson and Jeremy Maclin are elusive characters with speed and agility, ready for a breakout season, along with running backs LeSean McCoy and Brice Brown, they emphasis really is on speed fir the Eagles. Defensively, they continue to add bulk to their defensive line, adding Isaac Sopoaga in free agency, and drafting defensive tackle Bennie Logan give Philly a strong interior presence. Ex-Texan Connor Barwin, Trent Cole and Fletcher Cox should add pressure from the outside, and releasing veteran corner Nnamdi Asomugha and signing Cary Williams, Bradley Fletcher and Patrick Chung will give them a new-look secondary. Presuming the banged-up offensive line can protect assumed starting quarterback Michael Vick, I do expect the Eagles not only to return to competitive play, but be in contention to win their division.

After finishing 2-14 in 2012, the Chiefs enter offseason with little hope. Following the acquisition of quarterback Alex Smith from the San Francisco 49ers, they now have a viable option at the position which has been burdened with Matt Cassel and Brady Quinn. Although having such a dire season, they had six Pro Bowlers, including star running back Jamaal Charles, it's pretty clear they had some talent to work with. One of eight newly placed Head Coaches going into 2013, Andy Reid will bring his prolific offense down to Kansas City to rejuvenate the passing game. They have talented weapons also; Pro Bowl receiver Dwayne Bowe, former first-round pick Jon Baldwin, tight-end Tony Moeaki, draftee's Travis Kelce and Knile Davis, the list goes on. With a competitive quarterback, they have the offensive fire-power to compete in a less-than competitive AFC West. Defensively, the likes of Tamba Hali, Justin Houston and Dontari Poe give the Chiefs high-sack potential and an imposing front-seven. Pro Bowl safety Eric Berry is quickly becoming one of the best at his position, and adding Sean Smith and Dunta Robinson during free agency, in addition to Brandon Flowers give the Chiefs a very-strong secondary. Sleepers for obtaining a Wild-Card spot in a relatively open AFC, Andy Reid should manage to make the Chiefs a stronger team; reaching the .500 mark is a real possibility.

After winning seven of their last nine games in 2011 to give the Cards an 8-8 record, many thought Arizona were dark horses to sneak into the play-offs in 2012. The Cardinals experienced a catastrophic collapse in the latter half of the 2012 season, similar to their remarkable comeback in 2011. Winning just one of their final 12 games, the Cards became a laughing stock. Now, under the watchful eye of Bruce Arians in the Desert, the Cardinals are set for a competitive year in a tough division. Carson Palmer under centre give them a proven quarterback in a system heavily reliant upon a functional passing game. There's talent there, likely Hall-of-Fame wide-out Larry Fitzgerald is among the leagues best, while first-round pick Michael Floyd is set for a bigger role this term. Slot receivers Andre Roberts and Ryan Swope are talented receivers who are elusive underneath, and receiving tight-end Rob Housler is being tipped for a breakout season. Defensively, they had one of the leagues top units under Ray Horton, who has now left the team, but proven play-makers such as Calais Campbell and Darnell Dockett give the Cards one of the strongest three-man fronts in all of football. Pro Bowl players such as linebacker Daryl Washington and corner Patrick Peterson are rapidly emerging as some of the top players at their positions. However, losing Kerry Rhodes and Adrian Wilson leave them inexperienced at safety. The NFC is very strong in all divisions, most notably the West. The Cardinals face a tough ask if they wish to return to the post season.

Of all the teams mentioned, the Lions are the one team to have a steady quarterback in place in Matthew Stafford. Throwing for over 10,000 yards over the past two seasons, one of the leagues top young quarterbacks has become a proven commodity among his peers, and it doesn't hurt to be throwing to the wide-receiver the league has to offer in Calvin Johnson. Maintaining the same coaching structure, unlike the three teams mentioned previously, the Lions are poised to challenge in the NFC North. Their main issue was stopping teams defensively. A fearsome defensive front including Ndamukong Suh, Nick Fairley and rookie Ezekiel Ansah should provide ample pressure up front. Stephen Tulloch at linebacker is a rising star across the league, and signing safety Chris Houston and drafting Darius Slay should make their secondary much improved. Offensively, apart from Calvin, there wasn't much production on a consistent basis, but young receivers Ryan Broyles and Mike Thomas, in addition to Nate Burleson, should see increased production. The key addition of Reggie Bush should aid their flagging run-game, where Mikel Leshoure and Joique Bell should flourish in a supporting role. The real issue is the offensive line, where solid left tackle Jeff Backus retired this offseason. Drafting guard Larry Warford should provide some assistance, but there is still a gaping hole on the left side. Stafford and Johnson will give the Lions a chance to win most games and will compete in the North, but keeping Stafford upright is the key to their success.