Just how bad were the 2012 Arizona Cardinals?

A look at some PFF ratings shows just how dismal the season was compared to the rest of the league.

Share All sharing options for: Just how bad were the 2012 Arizona Cardinals?

We know that the Arizona Cardinals had, despite a 4-0 start to the season, a dismal 2012. We also know that the biggest culprits for the terrible were the quarterbacks and offensive line.

Just how bad were the Cardinals?

Using Pro Football Focus and their rating system, they were by far the worst team in the league.

If you aren't familiar with PFF and their rating system, it is fairly simple. For each play during a game, they can give a positive, neutral or negative grade. If a player does his job in expected fashion, there is nothing added or subtracted. However, if a player does something that stands out on a play to make it successful or should have made it successful, there is a positive grade. Conversely, if a player can be blamed for missing an assignment or some sort of misplay, he can be given a negative grade.

While many value the rating system that PFF, many don't give it much credence. Nonetheless, it is a rating given uniformly from play to play.

Using PFF, the Cardinals finished the season with a net -188.6, which was more than double the next worse team. Note the image. 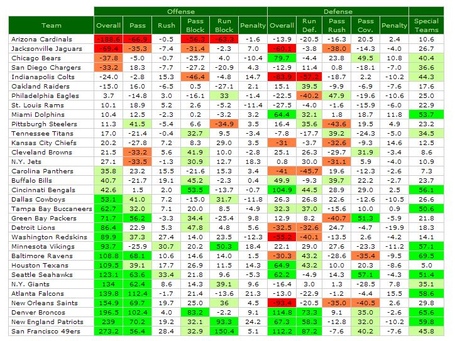 Jacksonville was next, but their net grade was -69.4.

Essentially, the Cardinals had far and away more mistakes by individuals than any other team in the league. And wouldn't you believe it? The passing game, pass blocking and run blocking had the worst grades.

The Cardinals had the worst combination of quarterback and receiver play and the worst line play by far -- the most mistakes and misplays by individuals.

Now, before we look at that dominant defense, while as a unit it was pretty solid, only the play in coverage and overall discipline (dealing with penalties) netted a positive score. The pass rush and run defense were negative and on the whole, the defense still netted a negative grade.

Looking ahead to 2013 -- we know that the passing game will not be that bad again. The offensive line still has questions, but with two starters returning from injured reserve, Bobby Massie seeing incredible growth over the last half of the season and the addition of potentially elite guard Jonathan Cooper, you figure that the offensive line play has to be markedly improved.

At the very least, the Cardinals will not be the lowest graded team in 2013. If that is the case, then that should translate to a few more wins.