A look at what to expect from the Arizona Cardinals rookie in their running game.

One of my biggest mistakes going into the 2013 NFL Draft was that I didn't take into account Bruce Arians' time frame with the Pittsburgh Steelers.

I talked about it, I knew about it, and yet it never really clicked with me until reports broke about their interest in drafting Jonathan Cooper why Cooper would be the pick over the Chance Warmack.

When you go back to Bruce Arians time with the Steelers and really look at the Arians offense, there was always one thing that stood out to me about the offensive line play and that was how much they asked the left guard to do in the run game.

Arians started his OC career with All-Pro, All-World, All-Decade guard Alan Faneca as his left guard toy -- no, not the Faneca on his last leg that Cardinals fans remember, but the one that would lend him to paving the way for 1300 yards for "Fast" Willie Parker in 2007.

In 2008, the Steelers replaced the exiting Faneca with Chris Kemoeatu, not nearly the player that Faneca was, but to a lesser extent, in the same mold as the pull and move guard that Arians so loved.

When Cooper became the front runner for the Cardinals pick the week of the draft, I hesitated to understand why, but I forgot just how much the Steelers ran the ball when Arians started out as the OC in Pittsburgh.

How much does Arians lean on a dominant guard to help lead the run game? Look at the numbers with Faneca and post-Faneca to find out:

In 2007, Faneca's last season with the Steelers, Pittsburgh ran the ball an astounding 511 times, good for the third most rushing attempts in the NFL that year, also finishing third in amount of rushing yards in the league that season.

In 2008, Kemoeatu's first season replacing Faneca, the Steelers went from third to ninth in rushing attempts, and plummeted to 23rd in rushing yards in the league.

In 2009 the Steelers went down to 18th in attempts and 19th in yards, a more respectable split, and with the emergence of Rashard Mendenhall, you saw the Steelers run game become more of a focal point in the offense, but we never saw the team rush nearly as much, or as effectively as they did with Faneca paving the way in the offense.

That brings us to the point of today's article; I know that was a really long-winded introduction to get to an article that isn't even just about Cooper but still.

Why the Cardinals drafted Jonathan Cooper

One of the things you want to do when you go back and look at games of the Steelers with Arians as the OC is watch what he has his guards do.

This is a simple trap block, the double tight ends on the right leave the defensive end alone and the right tackle and right guard have the responsibility of the defensive tackle on the strong side and the inside linebacker. 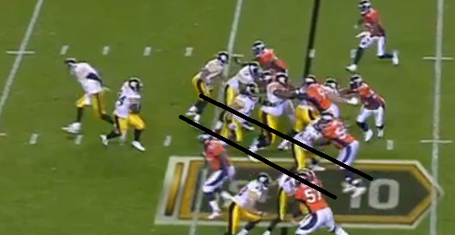 You see the running lane, but Kemoeatu isn't able to get through and lead, causing Mendenhall to have to wade through the trash in order to get the positive yardage on the play, a gain of five yards. 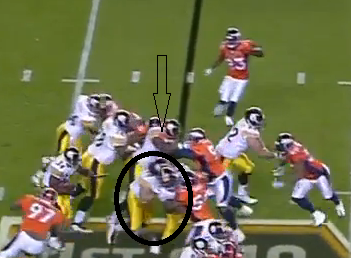 If Kemoeatu kicks the unblocked defensive end out, it gives the running back more options on this play, as he would either be able to get into and through inside or move outside, but Kemoeatu lacked the ability to read and react on the play and instead followed where he's supposed to go, and clogged the lane.

Then you look at Cooper on a similar type of play while at North Carolina and you see his ability to get to and through the hole and be that true lead blocker, or clean up the trash, whenever he gets to it. 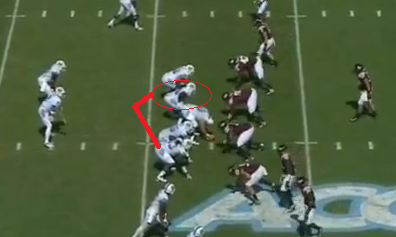 This will be more indicative of the type of alignment the Cardinals will run out of, as they don't have the personnel right now to run tight power sets, but we see Cooper running the same type of pull and trap the first man across his face.

When you watch it at full you see a guy who is light footed, nimble, and able to abandon his assignment and play football when needed (as opposed to Kemo running up his teammates back). 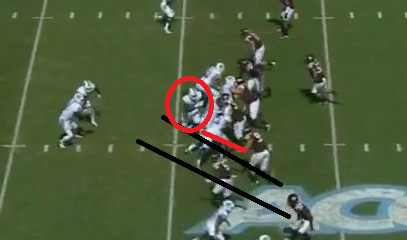 Now on this particular play, the Tar Heels are running a read option play and the QB does a poor job once he sells the fake of hitting the hole, and the end on the play is able to recover and make the play.

Notice how Cooper wins the leverage battle and is able to get to the defender's outside shoulder and win. If the QB had any speed, and Bryn Renner is not a quarterback you want to run read option with, he has a big gain.

On a play early in the game we see Cooper's ability to pull and lead block on a toss play to the outside. 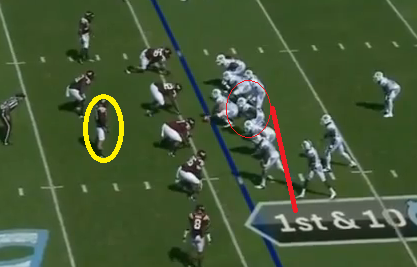 The things Cooper does so well is keep his head on the swivel, he's patient while the play develops and then he's able to identify the most immediate threat on this play and pick them up to allow the runner to gain positive yardage. 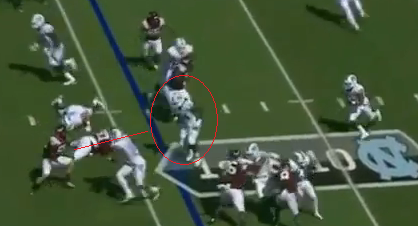 Cooper keeps himself square to the line of scrimmage, and then when he sees the free man on the play he attacks, and one of the biggest strengths of Cooper's game is that he hits moving targets.

So often in the NFL lineman are able to get out and pull, but lack the ability to hit and maintain blocks on moving targets in the open field.

Cooper looks more like a big fullback when in space rather than a plodding guard.

Arians' offense is based on a power run scheme that uses his guard to be able to pull to the strong or weak side of the formation and make blocks.

Cooper's ability to move both inline, on the second level, and when pulling to lead on a play will pave the way for the Cardinals running game, a running game that I think best suits one of the rookies.

When it comes to the running back situation with the Cardinals. my opinion is pretty simple: I am not a huge believer in Rashard Mendenhall, for reasons I have spelled out in my latest article here on ROTB, but I believe that they have some options at the running back spot, and one of them that just continues to show up as the type of back that will succeed behind the Cardinals offensive line.

Andre Ellington isn't a special runner in the pure sense.

He doesn't have breakaway speed, lacks creativity when running the football, and his vision isn't always the best.

When I was working with Arizona Sports during the draft season one of the things I talked about with Ellingtonthough, and one of the reasons I loved the pick, was his ability inside.

He is the type of back that follows his blocks almost to a fault.

He spends as much time running into his blockers as he does into defenders, but that isn't necessarily going to be a bad thing in the Arians offense.

On a simple trap play versus LSU in the Chick-Fil-A Bowl, we see what I'm talking about when it comes to Ellington's lack of creativity.

He gets the call and follows his blocks, despite new Cardinals inside linebacker Kevin Minter reading the play and filling the hole Ellington is supposed to run through.

Ellington has the perfect opportunity to bounce the run outside, with only a defensive back (not pictured) on that side of the field.

Ellington doesn't see it, and honestly he may not care.

The play was called to go through the "two hole" and he ran the play to that hole.

Instead, Ellington accelerates to where the hole is supposed to be, and pushes the pile forward for a four yard gain and a first down.

Could he have gotten more? Absolutely. There was a massive cutback lane that could have yielded a ten-plus yard run, but he took what was called and muscled through for a first down.

There's a concern it seems to some about Ellington's ability to run between the tackles, but he did that with effectiveness at Clemson.

We see Clemson lined up in a single back "Pistol" look, the weak side will block down, with the tight end playing off the line of scrimmage coming back to block backside -- a counter trap look.

Ellington gets to the hole and knows exactly where the cutback lane is, and gets into it, and leaves him one-on-one with the linebacker.

He is able to make the backer miss; he has elusiveness about his running style, and is able to pick up a big chunk of yardage.

The thing that makes me think that Ellington is the best running back for Arians offense is his ability follow his pulling blockers and then accelerates to and through the opening they create.

On this play, a staple in the Arians offense, the outside power, Ellington does a great job of slow playing his run, allowing his blocker, neither of whom are in the same stratosphere as Cooper when it comes to pulling and getting out into space, and then plants his foot and goes up field. 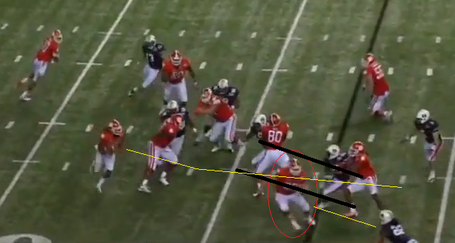 Ellington sees when his lead blocker is getting to his man, and that's when he stops going laterally, and begins going north and south. 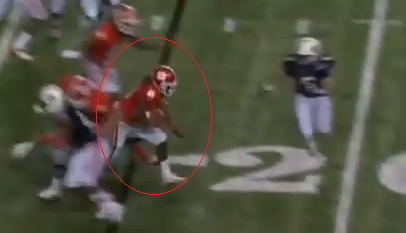 There's rarely hesitation in what Ellington is doing, and when he knows where the hole is, or where it is supposed to be, he's going to hit that hole and do so with authority.

With Ellington's ability to follow his blocks, his one cut and go mentality, and his willingness to take what's given to him, he has the look of the prototype runner for Arians offense... That is if he can hold off Stepfan Taylor, which we will talk about next week.