A look with images at how Larry Fitzgerald will likely be used for the Arizona Cardinals. Expect a big year.

Share All sharing options for: Larry Fitzgerald and how he will be used in the Bruce Arians offense

No matter where you stand on the Carson Palmer signing, and I really haven't seen many people say that he isn't a massive upgrade to what the Cardinals had in 2012, the biggest off season acquisition for the statistical resurgence of Larry Fitzgerald was offensive coordinator Bruce Arians (I know he's the head coach as well).

Arians has an infatuation with creating mismatches, and getting his best players, in this case Larry Fitzgerald in matchups that allow for his playmaker to get the ball in his hands in different situations.

Clearly I don't have the time, nor do the readers have the attention span, to show all the different ways that Arians got Reggie Wayne the ball in 2012, but the reality is he did a lot of things that Ken Whisenhunt never did, and it's because of Arians philosophy.

I talked about Arians and how he likes to "flood the field" in his routes to create pressure on the opposing secondary ,and one of the things I noticed when I went back and watched the film from the 2012 Colts season was Reggie Wayne was almost always in those route options, and he was always coming from a different alignment.

Working out of the slot 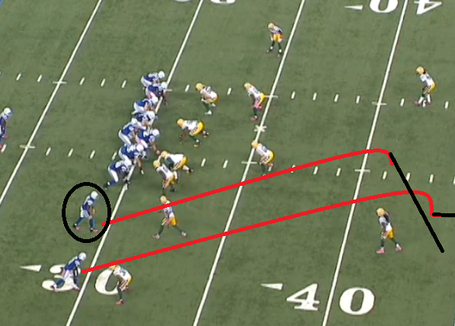 This is a double tight end left, two wide receivers split right with a single back formation, something that if the Cardinals have a second tight end emerge we could see in 2013, if not they likely will have Michael Floyd or Andre Roberts on the wide side of the field split out.

There interesting thing about this formation and the routes run, is that the action is too the short side of the field, and there are only two receivers in the route, with a safety valve leaking out late. 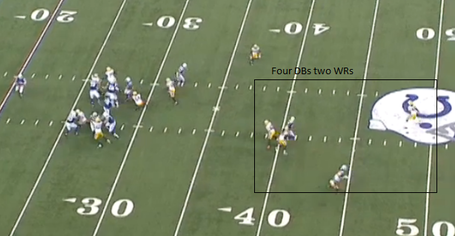 We see the way Arians has Wayne and the other receiver running almost the same route, just at different depths.

It puts pressure on the defense to figure out who to defend, despite only two receivers being in routes, and we see the linebacker on Wayne getting turned around, the deep safety committing to the deep route and Wayne coming off free.

Wayne's route running sold that he was going to take the cross route, so when he put his foot in the ground and went to the corner route, he put himself open for Luck who hit him 22 yards down field in the air, before Wayne gained a total of 29 yards on the play.

Without taking anything away from Wayne, Fitz is one of the best route runners ever, and if the line can give Palmer a similarly clean pocket to what Luck has there, we can see the same type of success on the deeper routes that Arians loves, or chunk plays. 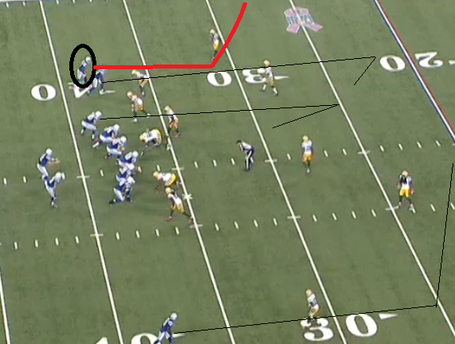 This is a formation we are more likely to see the Cardinals in a lot, with two receivers bunched left, a tight end left and a single receiver right.

The defense has to take away something, and they decide, correctly, to not let anything get deep, but it gives Wayne an almost unguarded look on the outside. 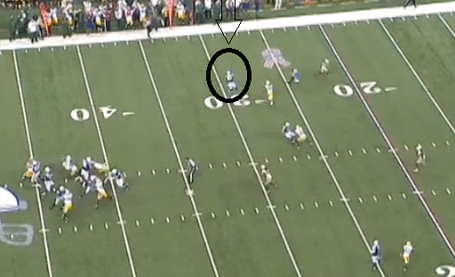 The inside corner gets pushed up the field by the threat of the deep route, and Wayne easily breaks off for an 11 yard catch. 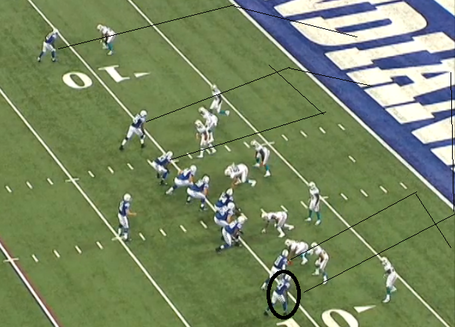 Again we see a formation we will likely see a lot of in Arizona, with the Colts spread four wide, with a tight end, and they send all five into routes, with Wayne lined up outside right in the tight formation with the other receiver.

This time Arians floods the middle of the field with post routes from three receivers on three different levels, but he also has to goal line out routes run by the inside receivers to force the safeties and linebackers to chase while the corner plays to take away the outside fade to Wayne.

When the Wayne breaks his route in the end zone, he's already won simply because the corner in man against him was playing outside shade and the dropping linebacker didn't get enough depth because of the inside men running shorter routes. 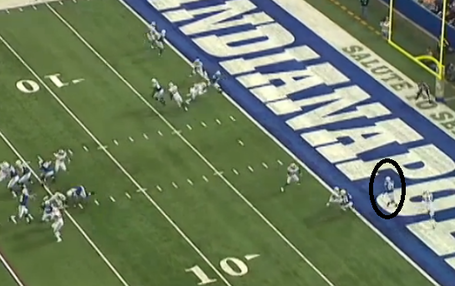 Arians is using Wayne's understanding and camaraderie with Luck to make the calls here. If the corner played up in a press man position, they would run the fade route because of the lack of help outside.

With Wayne and Luck's ability to understand the coverages they see, they are able to exploit the mismatches, but that starts with Arians moving Wayne around into different starting points.

When Wayne and Luck see matchup's they like, they take advantage.

Fitzgerald will be used the same way.

He'll get moved around the field, and aligned in ways that allow he and Palmer to adjust the routes they run based on the defensive alignment and coverages they see.

While we may not see another 1400 yard season from Fitz, I would never bet against him, we will see him used more creatively by Arians, something Cardinals fans haven't seen in a while.

That's what having a quarterback can do for you though.