The good, the bad, the ugly from Cardinals vs. Packers

A look back at the preseason opening.

Share All sharing options for: The good, the bad, the ugly from Cardinals vs. Packers

Game one of the preseason has to be considered a success for the Arizona Cardinals and the Bruce Arians era.

Carson Palmer and the offense looked comfortable with each other in the passing game, leading to a solid day for the veteran.

While there wasn't much to take away from the game in terms of what I'll be doing in the regular season (note this will typically be a Wednesday column in order to utilize the All-22 tape to give us a great look at what happened) there was still plenty to talk about.

Welcome to the Good, the Bad, and the Ugly post game recap.

The Good: So that's what a clean pocket looks like 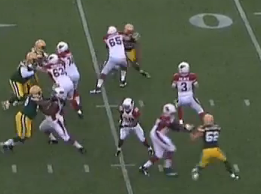 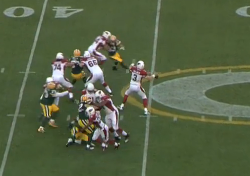 Carson Palmer threw the ball six times (the one missing shot is from a smoke route to Larry) and each time he had a clean pocket to step up and throw the ball in.

One of the things I was watching closely in this game was what type of protection the line could afford Palmer, would he be able to set up and throw the ball into those deep Arians routes, and they were deep, the average depth of target for his six throws was 20.3 yards (this is where the wide receiver was when the ball was caught, dropped, or overthrown).

While there wasn't any blitz packages or exotic looks, the fact that this preseason, the Cardinals were able to make it look like their starting quarterback didn't even come onto the field is something to smile about.

Jasper Brinkley, Reggie Walker, Kevin Minter and Rashad Johnson did well in defending the running game of the Packers.

Brinkley and Walker were keys in the Cardinals goal line stand against the Pack and were making plays consistently coming down hill.

As for Johnson, he struggled a little bit in coverage, but overall he played a nice game as a guy coming up from his free safety position and making plays in the run game.

Minter lived up to his reputation as a pure middle backer, as he looked comfortable flowing too and through the trash in the run game. There were a couple of disengaging problems, which made him late in tackle attempts, but overall you can't ask for much more from a rookie.

The Bad: Where's the pass rush?

It's only fair that I point out the lack of pass rush from the first team defense going against what is supposed to be a porous Packers offensive line.

In seven rush attempts the Cardinals first team defense yielded not a single pressure (five attempts by Rodgers and two by Harrell).

Again, there's nothing but vanilla game planning going on, but if I am giving credit to the offensive line of the Cardinals, I have to raise the question about the pass rush.

We did see the type of impact John Abraham will have on this team though, and as I noted on Twitter on that particular play Sam Acho was lined up as the OLB opposite Abraham, so that may have been to see if they could get any type of pressure from the OLBs at all, but the question remains, who's going to bring the heat?

The kicking game was an abject failure, from both the veteran and the rookie, and that could be something to watch as we move forward through the preseason.

If the Cardinals play like I think they will during the season, they'll be in a lot of games, and that means it could come down to the kicking game, and although it's just one preseason game, that's not something I want right now.

Defensive line depth is a concern until Dan Williams and Ricky Lumpkin get back on the field.

While the DL didn't play badly, there is going to be times when the second and third string guys need to make plays, and I didn't see a lot of that last night.

The first team safeties, and even parts of the second team when Tyrann Mathieu was playing out of the slot corner position, are worrisome in coverage.

No one outside of Mathieu has shown great instincts on the back end, or the athleticism to make up for their slow reaction to plays.

What was a strength of the team in 2012 is now an area of concern.

The Ugly: Seal the backside on running plays please

There was a reason the Cardinals brought in Eric Winston and it was because of his superior ability in the zone blocking scheme.

While the Cardinals are not going to a pure zone, they are going to run it at times, while also utilizing a power run scheme as well.

Well at least in game one, Winston, Brown, and the tight ends on the first team did a really bad job of sealing off the backside and opening up cutback lanes for Alfonso Smith (who got the start after Rashard Mendenhall was held out).

In a zone scheme Winston has to seal off the defensive end who is lined up head up on the guard, it's a tough block, but a key to the success of this play.

As we can see the rest of the offensive line has won on this play, and Larry Fitzgerald is countering back to block the OLB, meaning there is one guy that can make the play here and that's Winston's man Ryan Pickett. 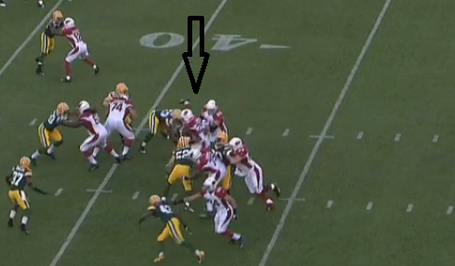 Unfortunately for Winston he wasn't able to seal the backside and Pickett makes the play resulting in a minimal three yard gain for Alfonso Smith. 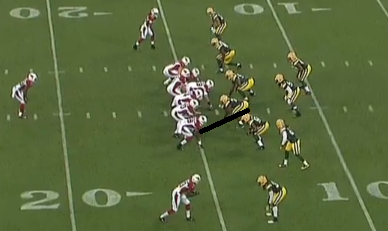 On this play the key block that needs to happen comes from rookie DC Jefferson.

We can see that the rest of the offensive line has won, there's literally one man to beat if Jefferson can maintain his block, and Smith has eyes on him right away.

Jefferson loses his man, and is able to fill the hole and makes a play on Fonzo for a short gain.

Player of the Game:

Mathieu did exactly what you expect of him, he lined up everywhere in the secondary, was asked to blitz, and ended the night with a pass break up, a sack and a nifty 24 yard punt return.

While other players played well, Brinkley and Minter at the inside linebacker positions and Javier Arenas at corner as Shaun pointed out, as well Charles Hawkins and Jaron Brown fighting for that fourth wide receiver spot, I thought Mathieu showed the most of what his impact can be in his limited reps in game one.

Final thoughts: This was the exact type of game the Cardinals needed to start the Arians era, a game with a big play from Palmer to any of the wide receivers, the offensive line keeping Palmer upright, and the defense pitching a shutout.

While there is still plenty to work on, hello running game and pass rush, there were a lot of good things to take away from game one of the preseason.