We have less than a month until the regular season begins!

But in the meanwhile, the first preseason game raised several questions surrounding the team. The ROTB Writing Staff takes their swing at three of them.

Don't forget to answer the questions yourself in the comments below!

1) Who impressed you the most in last week's pre-season game?

D.L. Parsons: The first and second team offensive lines collectively. Palmer wasn't touched, but Stanton got chased around quite a bit. Over all, a superior effort vs. nearly ALL of last year's O-line performances.

Alex: Person who impressed me most... I'd have to say persons... It's a toss up between three Rookies... Jaron Brown, Tyrann Mathieu, and Jonathan Cooper. Cooper did not at all look like a rookie out there. There were certainly a few plays where he could have opened up a huge hole for Smith, but his Pass Protection was superb and he showed us a glimmer of why we drafted him with the 7th pick. Brown was excellent, and stated his case to be on the roster. Mathieu showed his skills from College could very well translate into the next level with minimal to no difficulty. It's early, but these three guys showed up, we'll see if they can keep it up.

Randy Fields: 3rd Round Pick - Tyrann Mathieu. You don't expect that type of performance from your third round pick. That's the kind of performance you expect from your first and second. Wow, what a joy to watch. But tied is the play of the first and second Oline unit. They kept the quarterbacks clean and gave them time to perform. I realize that they need to work on the run blocking, but if they can keep the QB clean that is a 200% improvement over last year.

Shaun Church: The obvious choice is Tyrann Mathieu, but I'm going to go with the first-team offensive line's pass blocking. They all were good, and I'd like to single out Paul Fanaika. Starting in place of Daryn Colledge at right guard, Fanaika was tasked with taking on B.J. Raji and C.J. Wilson, and he held his ground. He did not allow a single pressure of Carson Palmer nor Drew Stanton.

Robert Norman: Charles Hawkins and Jaron Brown. For a scheme that focuses on vertical passing you need solid 4th and 5th wide receivers when your starters get tired. I had heard they looked good in training camp, but camp is very different from a game. Whether or not they were playing against Green Bay's backups they had separation on their routes and caught every pass thrown within reach.

Cdeveau: I chose Tyrann Mathieu as MVP in the player poll, however, I cannot say he impressed me the most, I expected it of him from the practices he's been having. Now that I've said my HB piece, I have to go with the rookie WRs in Jaron Brown and Charles Hawkins. I did not expect the performances they had, but I need to see it again to think about buying the Kool Aid.

D.L. Parsons: QB play was clearly superior to the QB-go-round we used last year. Palmer's passes were crisp, sharp, on-time, on-target and just slightly overthrown a few times. Stanton showed why he is a good candidate to be a starter. He displayed good accuracy, and even scrambled and threw accurately on the run a few times, giving the Cards an ability that hasn't been seen lately.

Alex Mann: If we were to compare it to Arizona QB's over the last few years? Hall of Fame worthy. To the rest of the NFL? Solid. Palmer looked sharp, with passes on the money, minus the Roberts drop, which is what we all expected. Stanton was also on point often throughout the game, with a few problems, but nothing serious. I was hoping we would see more of TerBush in the game, but he only got one throw.

Randy Fields: It was real NFL QB play, from our 1 & 2. There was some drop off from Palmer to Stanton, but I'd definitely roll with either of these guys, and it's nice to know that they're both able to play well in this offense. I like the vertical passing game, and I think it will make all of the WRs happy, and open up the running game as well.

Shaun Church: With the exception of left guard Chilo Rachal, the entire offensive line performed at a high level, allowing all four quarterbacks the time they needed to pick apart the Packers defense. Their collective 16-for-27 for 263 yards, two touchdowns and zero interceptions was good enough for a 116.74 passer rating (ranked No. 3 in the league through pre-Week 1). 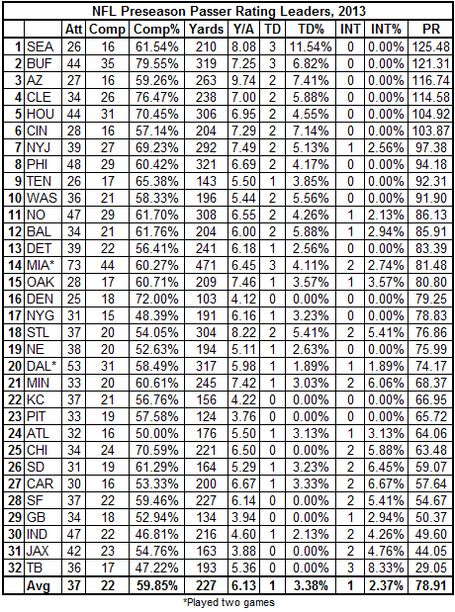 It's amazing what quarterbacks can do with time in the pocket, as even Ryan Lindley accumulated a 104.2 rating.

Yes, it's just the preseason. But considering the Cardinals quarterbacks stunk up the joint last preseason to the tune of a 59.84 passer rating and a 1-4 record, which they followed up with a regular-season 63.10 rating and 5-11 record, it's a great start for the group.

Robert Norman: Palmer was exactly what I expected, which is good. He didn't turn the ball over, he had crisp passes and showed he can throw down the field with accuracy. Stanton impressed me. I had only seen him in limited action over his career, but he was more accurate than I remember (players get better with more experience and time, who knew?).

Cdeveau: I got what I expected of Carson Palmer. I don't think the Cards will struggle there. As for Stanton, he was held back by D.C. Jefferson, otherwise he might've been my MVP of the game. He looked accurate, comfortable in the pocket and capable of commanding an offense. Ryan Lindley had some ups and downs but still showed why someone might see him as being coachable for NFL duty, however with Coach A stating they might keep 2, I don't think he'll get that chance with the Cards P.S.  I'm still advising taking a QB in the draft, and hoping we can somehow get Teddy Bridgewater. Start working your magic Keim and crew.

3) Who, or what, was the biggest disappointment following the game?

D.L. Parsons: The kicking game. Between them, the kickers left 9 points on the field. This is inexcusable. Missing one, maybe. But the younger Batson missing two? Good thing that there are three more preseason games left to turn that impression around.

Alex Mann: Offensive substitutions. It's early so these problems are expected, but as Bruce Arians pointed out, FAR too many timeouts were spent because of them. The Field Goal unit was also a disappointment. Jay Feely went 1/2, and Batson went 0/2... Again, it's early, but that's something you don't expect to be a problem during the preseason.

Randy Fields: Kicking game, but it's pretty good when you can see that it's just the kicking game that needs the big work. The other disappointment is with Roberts, if he could have caught that ball rather than drop it, that would have lit a fire under the whole team to show how far they've come from the last two years of mediocrity. It came later from other throws, but if that had been successful it would have been that much better and eye opening to everyone! But I know he made up for it later. I really like the direction this team is going!

Shaun Church: To me, the pass rush was a disappointment. They totaled two sacks on 16 plays in which they sent five or more defenders. However, I was impressed with the coverage on those plays. Those 16 snaps resulted in Green Bay quarterbacks completing just 6-of-14 passes for 45 yards (3.21 Y/A), zero TD and an INT for a 21.43 passer rating. This is outstanding, but the overall lack of pressure was a big disappointment.

Robert Norman: Run Game. While I enjoyed seeing runs of 7, 8, and 14 yards by Taylor, overall both him and Smith were underwhelming. However, most of the blame falls on the offensive line. As Seth mentioned in an earlier post, the team made good holes, but couldn't sustain them. I don't want to see a power running game, I just want an efficient running game.

Cdeveau: The lack of a run game. The OLine failed in their responsibility, and Alfonso Smith had issues with commitment, spending too much time dancing. Mendenhall's health is questionable and Ryan Williams is still sidelined, along with rookie Ellington. The only glimmer I saw was in rookie Taylor, but I need to see more. I can see the Cards searching the waiver wire or considering a trade for another back to look at, regardless of what Coach A has to say on the matter.