Cardinals vs. Packers film review: What went wrong on the long pass to James Jones

Seth Cox breaks down the breakdowns in the Arizona secondary.

Share All sharing options for: Cardinals vs. Packers film review: What went wrong on the long pass to James Jones

When Todd Bowles came to Arizona as the replacement for Ray Horton, there wasn't really a divide among fans, simply because the majority of fans didn't want to see Ray Horton go.

The reality of the NFL is that you're only as good as what you've done lately, and Horton and his defense excelled in a nearly impossible situation to excel in, while Bowles failed in a similar situation in Philadelphia.

Using a system he didn't believe in, the 4-3 with his defensive ends lined up outside in a "nine" technique, and with players that have almost all been replaced in the secondary, Bowles work was nothing short of dismal.

Now he comes to the desert, for the first time instituting his defensive schemes, with half of the starting defense being replaced with guys he undoubtedly vouched for, and has some pretty big dreads to fill (sorry for the terrible pun).

While most will say that game one was a defensive success, some look at the fact that the Packers took the ball with their first team offense, minus their top two receivers and getting a fourth round rookie accustomed to the left tackle position, and marched down the field, as the result of a big play in the passing game by Aaron Rodgers.

What happened on the 50 yards pass play that set up a very good goal line stand by the defense? 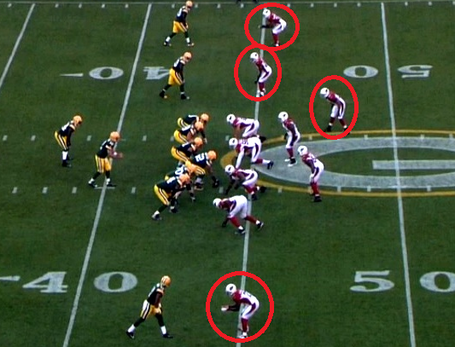 It started with the coverage they used, as the Cardinals were playing in their 4-2-5 nickel package that Jess talked about in his column documenting the formations used.

It appears the Cardinals are in a cover one, moving strong safety Yeremiah Bell into man coverage with the tight end, and one of the inside linebackers taking the back out of the backfield, with the other linebacker blitzing when this is typically run, but when they drop they double cover the tight end and even Jasper Brinkley, who is lined up at the weak side inside linebacker position in this case, turns to cover the tight end, so the exact coverage doesn't end up looking like a cover one, but you can't really call it a cover two because there ends up only being one safety deep, so that seems to be the start of the issue. 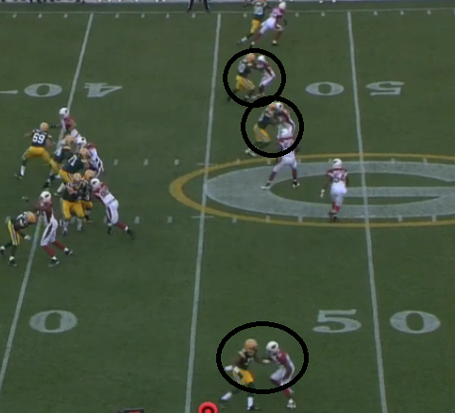 Seconds after the snap we can see the next issue, as three of the receivers in the route are bodied up and covered but at the very top of the screen Cason's press coverage is easily beat and he's playing catch up from the beginning. 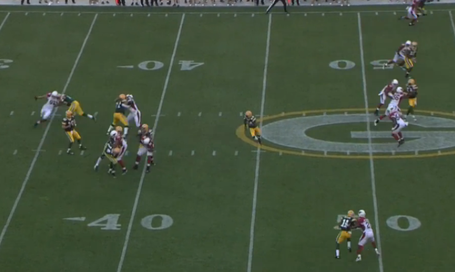 Hard to see in the picture but Cason actually is able to recover fairly well (I can't wait for All 22 footage which will make this much easier), and Brinkley now recognizes that no one, on third and two mind you, has the receiver out of the backfield, this was a mental error that was not addressed in the media, but was likely not overlooked in film review, as on a third and two early in the game you cannot have a blown assignment like this.

The missing piece to all of this was where Rashad Johnson was, as the play was in front of him, and he should feel comfortable enough leaving Patrick Peterson, at the bottom of the shot, alone on the boundary side of the field.

This means that he should have been shading to the wide side of the field where three routes were being run, and he may have been, but without the ability to see where he is, and by the fact he was so far away in when he comes over to help, there's no way of accurately tell here, but it seems he wasn't in place on this play.

Rashad is the deep man and this was the first that he was in the picture on the game film, but there was a misread somewhere, by someone.

This is an extremely difficult coverage, and a lot of the time as the single deep man you have to pick your poison on what route you want to try to jump, but you can't get caught this late coming over the top, even though he's in front of the play.

How we know he's late coming over the top is because by the time the receiver catches the ball he's at worst even with Rashad, and Rashad is nearly on the numbers instead of pushing the sideline.

There were several breakdowns on this play, but one that the Cardinals can't have, and Tyrann Mathieu has been announced as the starter at the free safety position so hopefully there will be a deep ball versus Dallas we can compare too, is the single high safety being late, out of position, or slow to make the read defensively coming over the top to help.

It is an extremely difficult play to make, but the reality is if Bowles is going to be bringing pressure from one of the inside linebacker positions, and playing man coverage across the secondary, he needs to be able to trust the deep man, whoever it is, will be there to make a play on the back end.

While this was a small blip on an otherwise sparkling debut for Bowles and the defense, there's always room for improvement, and this was one spot that stuck out as needing work early.