Arizona Cardinals position battles: Who trended up and who trended down vs. Cowboys

Is anyone on the verge of being cut after Saturday's 12-7 victory over the Dallas Cowboys?

Share All sharing options for: Arizona Cardinals position battles: Who trended up and who trended down vs. Cowboys

Not that a win is ever a bad thing, but ugly wins in the preseason are easier to handle than those in the regular season are. There is still time to iron out some of the issues that continue to show themselves -- the same goes for new problems that make an appearance.

The 12-7 victory for the Arizona Cardinals over the Dallas Cowboys at University of Phoenix Stadium should leave a bitter taste in the mouths of every offensive player in red, as every unit underachieved Saturday. The defense forced six turnovers -- three fumbles and three interceptions -- and the offense turned those into just six points.

A point per turnover is unacceptable. What was the problem? Among other things, the red-zone play was horrific.

"We play extremely well all over the field until we get inside the 20, and then we have a ton of mental errors," head coach Bruce Arians said. "It baffles me. With all three groups, we had mental errors in the red zone that ended up in field goals. [...] We've got to learn to score touchdowns."

Arizona finished 0-for-5 in red-zone touchdown opportunities. They were able to notch just two field goals on those five chances (they also went for it on fourth down once, and Jay Feely missed a 30-yard try on another).

Quarterback Carson Palmer was not on the same page with his receivers most of the afternoon, and the run blocking was not much better than it was in Green Bay.

Running Back Rashard Mendenhall gained 32 yards on seven carries (4.6 yards per carry) in his Cardinals debut. Though most of those yards came on two plays, he appeared to have the burst he was known for before tearing his ACL at the conclusion of the 2011 season.

Whose stock is up and whose is down after the preseason home opener? 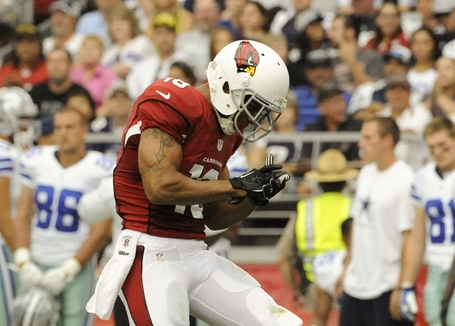 How did he do?

How about four receptions for 85 yards (21.3 yards per catch) on six targets, including running as the No. 4 receiver for the starting offense.

He missed over a week of camp practices due to a hamstring injury, and in that time, receivers Jaron Brown and Charles Hawkins stated their cases for the No. 4 spot after Larry Fitzgerald, Michael Floyd and Andre Roberts.

But Taylor is firmly in the mix now after displaying run-after-the-catch skills and crisp route running.

Every back but Ryan Williams saw the field Saturday. He continues to sit out as though he is oblivious to the fact that he could be cut because of it.

Mendenhall has been mentioned already, and rookie Andre Ellington made a few plays with his feet in both the run game and the passing game. Ellington rushed for just 24 yards on 10 carries (with a long of 24 yards...) and caught two passes for 15 yards -- including a nice 12-yard grab over the middle on a ball thrown too hard from too close by Ryan Lindley.

The other rookie, Stepfan Taylor, contributed as well. His 20 yards on six carries were not pretty, as he had little running room with which to work, but just being on the field and gaining game experience under the lights is helping him earn a spot on the roster.

At some point, head coach Bruce Arians will have enough of looking at that No. 34 jersey with no pads underneath them and ask Williams to leave his playbook on his desk. That is looking more likely with each passing practice and game featuring Williams spectating from the sideline in athletic shorts. 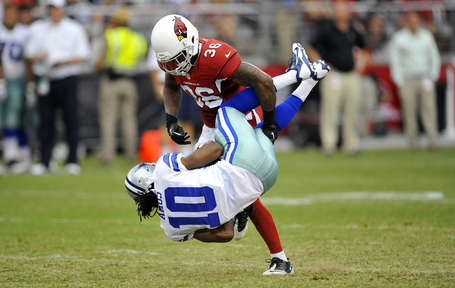 It was a slow start to training camp for undrafted rookie safety Tony Jefferson.

But over the past week, he has been seen at practice flying around in the defensive secondary making plays and coming up to help against the run.

That turned into a monster performance Saturday in Glendale, as he recorded five tackles (all solo and two for loss), two passes defended and two interceptions.

His first pick came in the second quarter off Cowboys quarterback Kyle Orton on a deep ball intended for Dwayne Harris; he played center field and cut off the Orton pass, hanging on after colliding with teammate Curtis Taylor. The second came in the fourth quarter off third-stringer Alex Tanney; he jumped a deep in-route by receiver Jared Green and returned it 29 yards, ending a comeback attempt and sealing the 12-7 victory.

With Rashad Johnson out and the team in need of safety depth, Jefferson has figuratively stood up and shouted that he wants to play football for the Cardinals this fall. There is no doubt Arians and defensive coordinator Todd Bowles heard those shouts Saturday.

Despite recovering two fumbles versus the Cowboys, inside linebacker Jasper Brinkley performed poorly in coverage and was a complete non-factor in run support.

His struggles in coverage were perhaps to be expected. He is neither the quickest nor the most agile linebacker on the team, and he has been traditionally horrible in coverage throughout his career.

But failing to make plays against the run hurts his stock -- especially after the two-game performance from rookie Kevin Minter, who has been flying around and making plays from sideline to sideline. Arizona signed Brinkley to beef up the run defense to help stop division rivals from smashing them in the mouth six times per season. He failed Saturday to do what he was brought in to do.