Can Cards quarterback Carson Palmer handle designed roll-outs? We turn to ProFootballFocus to give us the answer.

On a fourth-down play Saturday in which the Arizona Cardinals gambled and went for it against the Dallas Cowboys, quarterback Carson Palmer faked a handoff to running back Stepfan Taylor (who had lined up at fullback) before rolling out to his right to fire a pass to running back Rashard Mendenhall.

The pass was underthrown from an awkward angle due to pressure from Cowboys defensive end Jerome Long, raising questions via Twitter whether Palmer should be rolling out to attempt passes.

That's wrong, and here's why.

I did some digging at the request of ROTB's own Seth Cox, and what I came up with was the following chart (which was originally done in this article from ProFootballFocus founder Neil Hornsby; I recreated a version of it for my own use).

As you'll see, Palmer was the fifth-highest-ranked quarterback on designed roll outs last year. While his yards-per-attempt average is middle-of-the-road material, the fact that he did not throw an interception and completed 70.0 percent of his attempts says something about his ability on the run. 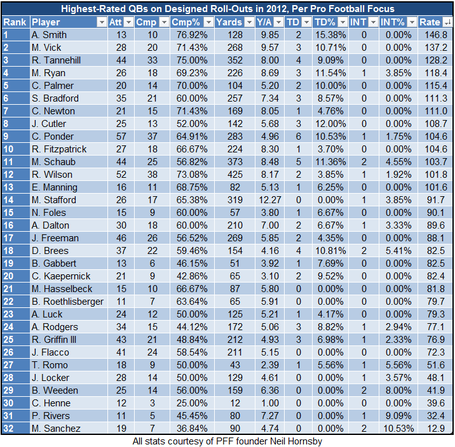 Moving the pocket is risky because it leaves a quarterback vulnerable to edge-rushers. Let's say a quarterback rolls to his right on a play designed to get him out of the pocket, and his right tackle fails to win his battle with the defensive end or linebacker across from him. That defender will have made the game's highlight reel after doing very little work.

back, the quarterback would have the option of stepping up to avoid the end while in turn increasing the chances of an accurate pass.

Whereas on a roll-out, one lineman can turn a potential first down into a turnover on downs by missing a block, an entire line can protect the quarterback from the comfy confines of the pocket despite that right tackle missing the block.

In Saturday's instance, Long put pressure on Palmer because right tackle Eric Winston blocked down to sell the play-action fake. Tight end Rob Housler -- who was lined up next to Winston -- ran a route, leaving Long with a free shot at Palmer and a narrowly missed sack.

But just because Palmer had success in doing it last year does not mean he should do it often. As charted above, he attempted only 20 passes on designed roll-outs last season. That's 3.5 percent of his total attempts (565).

Compare that to Houston Texans quarterback Matt Schaub, who threw 44 passes on roll-outs, equaling 8.1 percent of his attempts (544). Or the Minnesota Vikings' Christian Ponder, who led the NFL with 57 such attempts that amounted to 11.8 percent of all throws (483).

If head coach Bruce Arians calls 20 to 25 plays to allow Palmer to move the pocket in 2013, no one should wonder about BA's sanity. The fact is that Palmer is mobile enough, smart enough and his release is quick enough that he can handle a little over one designed roll-out per game.