Cardinals vs. Cowboys: The good, the bad and the ugly

Another game and what went well, what didn't and what was awful?

Share All sharing options for: Cardinals vs. Cowboys: The good, the bad and the ugly

Two games in the books in the Bruce Arians era, and two wins to show for it.

While Game 2 wasn't the complete performance from the offense that the fans and, guessing from Arians postgame comments, he were looking for, there was still a lot of good that can be taken away from this game.

Let's get on with the good, the bad and the ugly from the Cowboys at Cardinals.

The offensive line did a good job, there were more pressures surrendered by the first team than last week, in pass protection and stepped up in the run game.

We saw glimpses of what can happen with this combination zone-power rushing attack, and Jonathan Cooper had one of the prettiest pull and seals you'll see in the NFL.

In this power play everyone but Cooper blocks down, leaving the outside linebacker as the kick out guy as Cooper acts as the fullback coming through the hole. 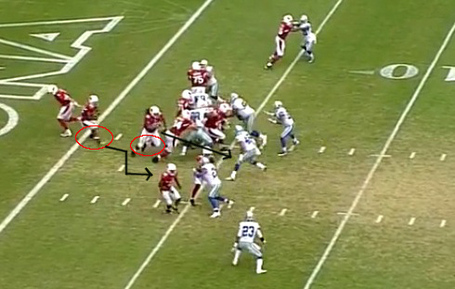 Cooper comes around the corner as the entire right side of the line collapses down their men, the wide receivers take the secondary on the outside, meaning Cooper has first man through the hole, and Mendenhall will read his block and go off his backside.

This play works so well because the outside linebacker, who I need to point out is undrafted free agent rookie out of ASU Brandon Magee who's running with the second team, gives up his outside shoulder and instead of scraping into the hole and squeezing the play into the pile, which effectively allows Cooper to block the second linebacker coming over in the play. 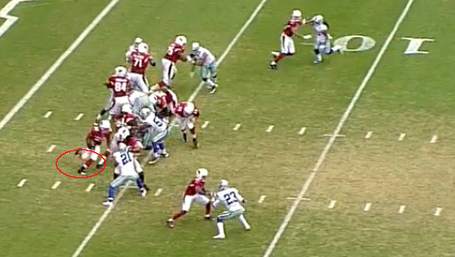 Once Cooper seals off BOTH linebackers, Mendenhall knows he's going to go towards the outside of the line and plants his foot and gets off of Cooper's butt and to and through the hole.

This gives us a good look at what we can look forward to as the offensive line and running backs begin to gel, and is just one example of the way the first team offensive line continued to play well.

The Bad: Still waiting on that pass rush

One of the most concerning things coming into the season, and so far through camp is that the Cardinals are relying on 35 year old John Abraham to provide the Cardinals pass rush this season.

Well, they aren't really relying on it, but there haven't been many instances of the Cardinals first team defense supplying any type of pressure on the quarterback.

After two games, the first team defense has yielded zero sacks, and that is going against two of the more questionable offensive lines they'll be seeing this early.

While the defensive calls are without a doubt vanilla, and the blitzes are more about getting timing down, the fact that Calais Campbell, Darnell Dockett and company talked so much during the off season about how much they were going to be set free, and then for them to come out with two underwhelming performances, the concern of pass rush is still there, at least for me.

The Ugly: That red zone offense

Without inundating you with a lot of words, because that article is going to be our film review for tomorrow, the Cardinals need to figure things out in the red zone.

While I have preached patience as Palmer and the wide receivers try and find their way in Arians intricate passing attack, the reads, and missed throws by Palmer were more disappointing than anything to do with timing.

The most important preseason game is coming up this week, and it really is the last chance before the bullets begin to fly for real for the first team offense to get things together before facing one of the best defensive lines in the entire NFL in week one versus St. Louis, and I for one would like to see that timing worked out.