A look at what happened in two of the team's failed red zone appearances.

Observations and educated speculation, that's what film review is when you don't have access to the playbook, are not in the locker room, and are an outsider in a world that has its own set of rules and language.

Yet we as fans, with the advent of things like Twitter, All 22, and in depth pieces from guys like Matt Bowen of Bleacher Report, have raised our knowledge base and understanding of the NFL game to new heights.

That's what this will be, a weekly look at some of the key play(s) of the game and what made it successful, what made it a failure, and how it impacted the game positively or negatively.

As always, suggestions or questions on certain plays are highly encouraged.

What happened on the two missed red zone opportunities?

First thing we need to understand is the defense that Cowboys played in this case, which was the "Tampa 2" that Monte Kiffin has made his name with.

In this specific set, the Cowboys are running a the nickel set (5 DBs, 2 LBs, 4 DLs) which changes how things work just a little bit, but not much.

(The red is where the zones the defense is playing, the yellow is what Matt Bowen called the sweet spots to beat the defense, but those aren't the routes we'll be looking at here). 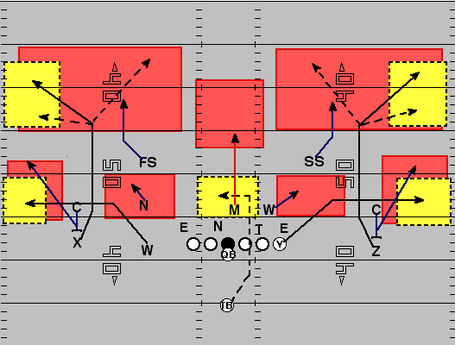 In this play the Cardinals spread the field in a five wide set, with the tight end and running back flexed out, along with the three wide receivers.

The Cardinals are going to run many of their routes into the areas that Bowen points out in his article: 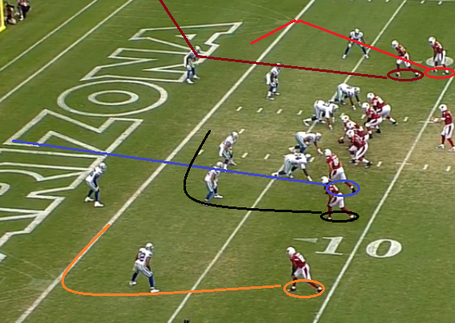 As a veteran quarterback in the league, Palmer is familiar with the holes that the Dallas coverage will allow the Cardinals to take advantage of, which makes his read on this play even more puzzling.

When the ball is snapped Palmer's head never leaves the far side of the field, for some reason he seems intent on making a throw to running back Alfonso Smith on a slant route versus the Cowboys best corner on the field Brandon Carr.

This begs the question -- was this intentional by Palmer, Arians and company, or was this simply the Carson Palmer that Bengals and Raiders fans have warned us about? 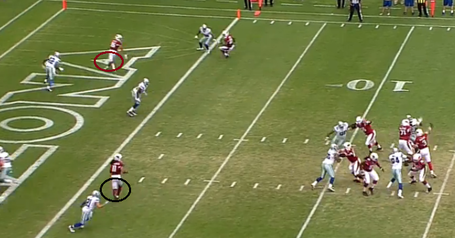 We can see the zone coverage taking effect, and we see the massive holes that it has created in the zone, with the nickel man that passed off Larry and the safety not getting deep enough in his drop to keep Floyd from getting behind him.

The throw itself was abysmal, and badly behind Smith, and leads to a Jay Feely field goal, but the play design was excellent, and that leads to open receivers, multiple open receivers who could have made an easy play on the ball, instead of trying to fit the ball into a tight window to probably the fifth best receiving option on the field.

At the end of the first quarter, after an excellent 78 yard drive to that point, the Cardinals lined up in a formation that fans will need to familiarize themselves with as they had 12 personnel, one running back, two tight ends and two wide receivers, with the tight ends stacked on the left side.

After motioning Michael Floyd to the left side we see the formation set: 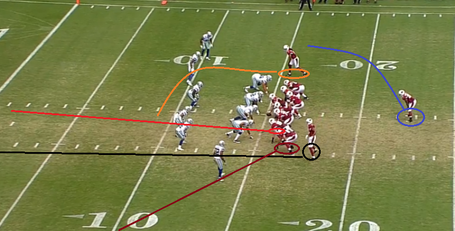 It was an interesting route selection by Arians on the play call here, as all of the routes are into the teeth of the zone coverage except for the underneath route run by Fitzgerald, but it looked like the Cowboys changed up their coverage, as they had only one safety deep, but again you'll notice the middle of the field was wide open.

In this scenario, if Palmer wants to get the ball to Floyd he'll have small window to do so, between the dropping corner and over the top safety, unfortunately he waited too long, and the congestion in the general area made it a poor decision, which luckily was not picked off by the safety coming over the top. 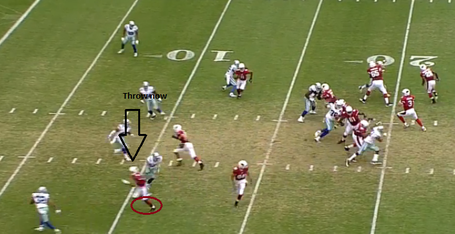 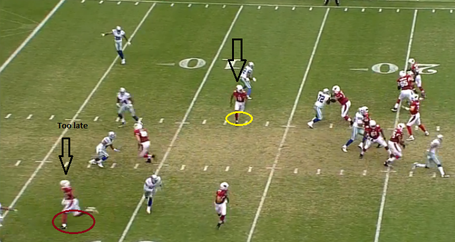 As we can see, the ball was too late, and leads Floyd into double coverage. 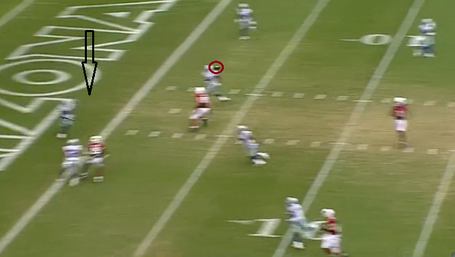 The plays above show the creativity in Arians schemes, they get players open, but Arians can only do so much, Palmer and the receivers have to be on the same page and execute.