Stats, matchups and connections for the Chargers-Cardinals preseason Week 3 game in Glendale.

Share All sharing options for: Chargers vs. Cardinals: Stats, matchups and connections

The preseason win/loss column means very little in terms of regular season success, but the Arizona Cardinals are 2-0 heading into Game 3 against the San Diego Chargers. More important is how the first- and second-teams performed while on the field.

We don't have much to go by based on the first two games. In Green Bay, the first-team offense was just okay; they were terrible last week at University of Phoenix Stadium against the Dallas Cowboys.

One promising note is that the defense appears to be ready for anyone. In two games, the starting unit has three turnovers in five series.

Here are more statistics, some connections and more for the Cardinals third preseason game.

Quarterback Carson Palmer is 11-of-21 passing for 143 yards, one touchdown and zero interceptions for a 90.0 passer rating through two preseason games. He has yet to be sacked in roughly three quarters of play, and the first-team offensive line has protected him as well as one can ask.

The chart to the right shows just how good they have been. Not every game will be like that, obviously, but for the first 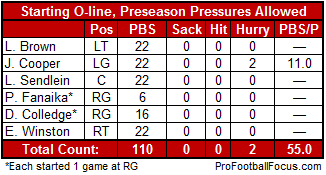 two games with three new players from last year's starting five (Levi Brown was injured, remember) in a new offense, that's about as good as it gets.

How good is allowing a quarterback pressure once every 55 pass-blocking snaps?

The Denver Broncos' offensive line led the NFL last year with 6.4 pass-blocking snaps per pressure allowed (the Cardinals tied for 28th with 3.2).

As stated, not every game will be like that -- I hope that goes without saying.

This will be the third straight game the defense has faced a good quarterback behind center. Philip Rivers, though he throws a lot of interceptions, is among the better quarterbacks in the league. He has completed 10-of-15 for 95 yards, no TD and one INT for a 56.2 rating this preseason and has been sacked three times.

Palmer is 2-4 against the Chargers. He completed 69.8 percent of his passes in those games for an average of 339.3 yards per game, 14 total touchdowns and three interceptions for a 116.4 rating.

The starters should play into the second half Saturday night at University of Phoenix Stadium, so look for Arizona's run game to get going at some point. Though it was not great through two games, starting running back Rashard Mendenhall did average 4.6 yards per carry last week in his preseason debut.

The Chargers' offensive line is not very good. Collectively, they have been one of the worst groups throughout the preseason, allowing seven sacks and 29 total pressures in two games. Compare that to the Cardinals' line, which has allowed three sacks and 17 total pressures. Look for Arizona to get the pass-rush going early. This could be a game to catapult the confidence of the starting front seven into the season, as they will not play much -- if at all -- during the preseason finale in Denver.

Before we get to the obvious connections, let us first go over the ones of which you may not be aware. The Cardinals currently have two former Chargers players and two former coaches on the roster.

Cornerback Antoine Cason was drafted by San Diego in the first round of the 2008 NFL draft (No. 27 overall) and played his first five seasons there. He totaled 268 tackles, 12 INTs and 46 passes defended. Tight end Kory Sperry joined the Chargers as an undrafted free agent in 2009 and spent two seasons with a bolt on his helmet (23 games played).

Quarterbacks coach Kevin Ross played in San Diego during the 1996 season before serving as an assistant secondary/quality control coach from 2007 to '08. And assistant special teams/assistant tight ends coach Steve Heiden was a third-round pick of the Chargers (No. 69 overall) in 1999 and played three seasons with them.

San Diego has five former coaches and four former players on their roster. 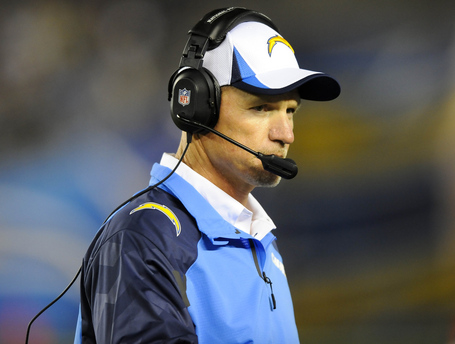 Chargers' offensive coordinator Ken Whisenhunt is the former head coach of your beloved Cardinals and roamed the sidelines from 2007 to '12. He is the franchise's all-time wins leader, at 49, but his only winning seasons came in 2008 and '09, while Kurt Warner masterfully ran his offense.

Offensive guard/center Rich Ohrnberger spent last season in Arizona, playing in 13 games while starting four. Running back Fozzy Whittaker spent the final two weeks of the 2012 season on the Cardinals' practice squad. Kicker Nick Novak spent part of the 2005 season with the Cardinals. He appeared in five games, going 3-of-3 in field goal attempts with a long of 35 (all three came in the 17-10 defeat of the rival San Francisco 49ers on Dec. 4, 2005.)

And finally, defensive back Richard Marshall spent just one season in Cardinal Red, but it was a good one. He totaled 71 tackles, three interceptions, two sacks and moved all over the secondary, playing outside cornerback, slot corner and safety during the 2011 season. Former coordinator Ray Horton considered Marshall his defensive MVP that season. He signed with San Diego earlier this week after spending one injury-plagued season with the Miami Dolphins.