Cardinals vs. Lions: How to stop Detroit offense

The Detroit offense is very good. How can the Cards stop them?

Share All sharing options for: Cardinals vs. Lions: How to stop Detroit offense

The Lions are rolling into the desert with one of the better offenses in the NFL.

Their marquee weapons are well known by any casual football fan in Matt Stafford and Calvin Johnson, as well as new addition Reggie Bush, but many don't understand the importance of the Bush signing in what the Lions want to do.

Even with teams knowing that the Lions would be throwing the ball an insane amount of times, it didn't stop Calvin Johnson from putting up an amazing season statistically.

The problem has been that the Lions didn't have a complimentary piece to put next to Calvin to take the pressure off of him.

Well, now they seem to have found two in Reggie Bush and the less heralded, but equally as effective Joique Bell.

How are the Lions deploying this backfield tandem, and could stopping the dynamic duo be the key to winning Sunday's home opener?

Catching the ball out of the backfield:

It may seem like stopping Bush would be the key, and it might well be, but he isn't the only one catching the ball out of the backfield, but he still is the most dangerous. 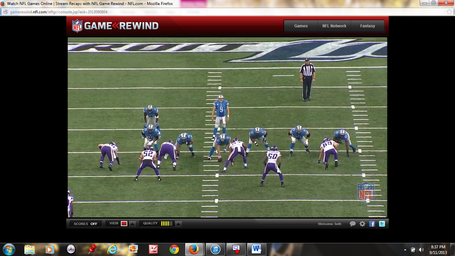 The Lions line up in an 11 personnel with Bush lined up next to Stafford in a shotgun formation. 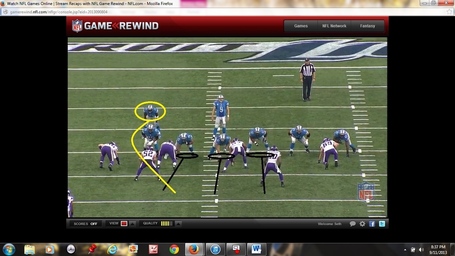 They'll throw a delayed screen to Bush, getting all three interior linemen, including the massive Larry Warford, out in front to block. 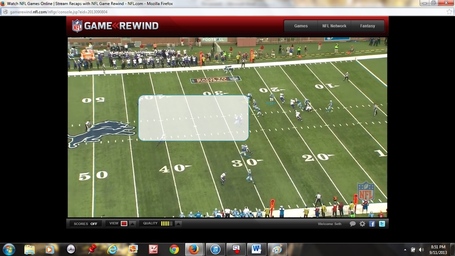 The white area is the zone where any of the four players within 15 yards will have to make a play, and nine times out of 10 Reggie Bush is going to make ALL of those defenders miss, especially when he has two blockers out in front of him. This play resulted in a 77 yard touchdown.

The Lions use Bush as a decoy just as well, getting Bell the ball with blockers in front. 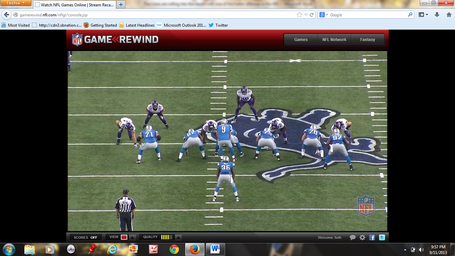 Bell is lined up as the single back, and Bush motions to the backfield faking an end around, but they also send the tight end down the line as a "lead blocker" almost like a backside counter block to screw the linebacker's keys up.

That caused the defense to focus on Bush as Bell slipped out into a screen route. 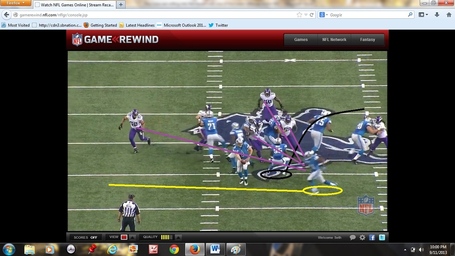 As Bell slips out he has lead blockers, Warford again, as well as the center, and there are only two defenders that have any sort of chance to make a play. 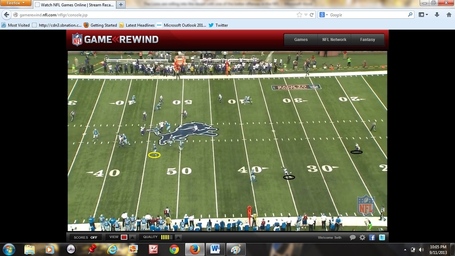 There is NO ONE on the Vikings defense within twenty yards that sees where the play is headed, and if not for a great tackle by Harrison Smith, the deep safety, this is a touchdown and not a 29 yard gain.

How the defense stops this: 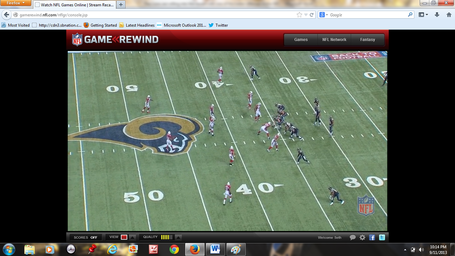 The Cardinals are in their dime defense, something we may see against the Lions as well, with Dansby the only linebacker in on the play and Jerraud Powers spying Rams running back Daryl Richardson out of the backfield.

The problem wasn't anything but the execution on the play by the defense, because Bowles had them in position to make a play. 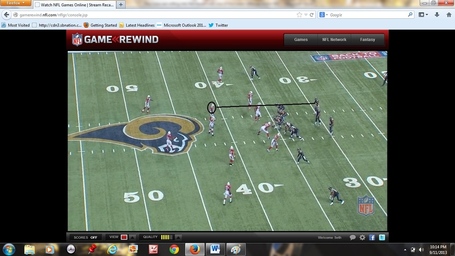 Powers has the running back in a one on one situation, and the reality is the coach did a great job of putting his players in a position to succeed on this play.

*Note: This was a third and 19 play and the Cardinals were playing soft, but this is still a good example of what problems could happen versus the Lions. 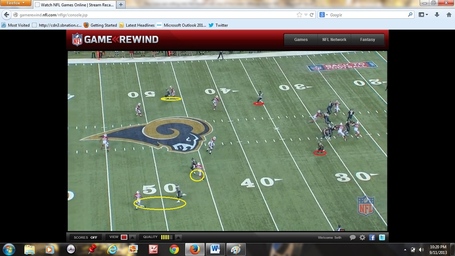 The Cardinals do an excellent job of keeping coverage's deep, and "letting" the underneath stuff go, but they don't pick up either of the backfield routes, and that will be Bush and Bell, not Richardson and Lance Kendricks.

When this happens Powers gets up to the ball, but misses the tackle. 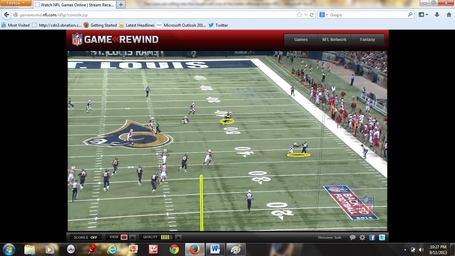 If the wide receiver gets his block, the top yellow circle, this is a HUGE play for the Rams because Powers doesn't finish the play.

One of the biggest thorns in the side of the Cardinals this weekend was Jared Cook, and that was even when they defended him in numerous ways. 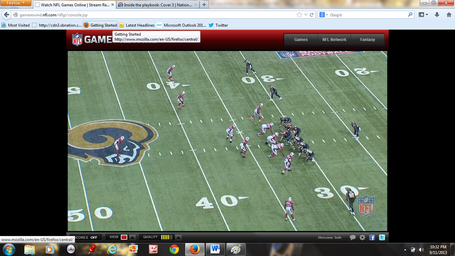 On this play late in the third quarter the Cardinals are in a base 34, and drop into a zone coverage, the problem is that Jasper Brinkley doesn't get nearly enough depth in his drop. 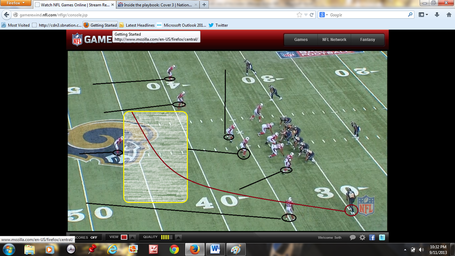 The Cardinals drop into what looks like quarters coverage but because Brinkley doesn't get enough depth, and the secondary is bailing to keep the wide receivers from getting behind them, it ends up being a huge gain. 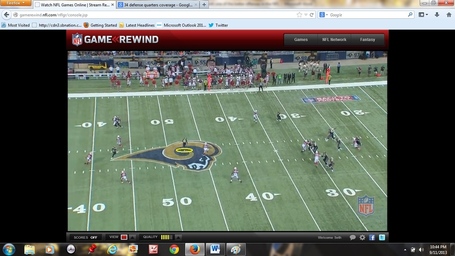 Now if Brinkley gets to the proper depth in his drop he makes the throw from Bradford much more difficult.

Again, Bowles puts his players in a position to make plays, and they fail to do so.

The Lions have shown that they are willing to split Bush out wide, and they have a dynamic tight end Brandon Pettigrew, oh and that Calvin Johnson guy isn't too bad.

The question becomes can Bowles make the right calls and get his players in a position again to make stops? Oh, and can they make those stops?

That's what will be to the Cardinals victory on Sunday.