A look, with film, at how the Rams have been passing the ball in the preseason.

Share All sharing options for: NFL Week 1, Cardinals vs. Rams preview: A look at the St. Louis passing attack

All of the wonderful things that Arians and company have said and done up to now won't matter if the results on the field do not improve, even if it doesn't reflect in the win-loss record, but that won't be known for months.

What we do know is who the Cardinals first opponent will be.

How will the Cardinals combat the Rams new offensive weapons?

What the Rams will look to do through the air?

The Rams brought in a lot of young, dynamic, and versatile talent in the offseason through the draft and free agency.

What they want to do is get defenses stretched both horizontally, with quick throws outside that allow their play makers to get into one-on-one situations in space, and vertically, something Cardinals fans remember all too well from last year.

In the third preseason game against the Broncos, the Rams were in a short first-and-goal situation and brought out a four-wide set, with trips to big side of the field.

On the trips side they had Jared Cook, split out from his normal tight end position, Tavon Austin in the slot, and Austin Pettis out wide.

This formation immediately forces the defense to make a decision, as they have to decide how they want to attack.

Pettis, at 6'3", has an outstanding ability to get up and get the ball out of the air.

Most are familiar with the diminutive Austin, an exceptional player in space, and someone that the defense always has to commit a corner too.

The problem becomes Jared Cook, who at 6'5" is a WR in a tight end's body.

He has the ability to stretch the field, but also is too big and strong to bring a corner down to use to cover him.

The Broncos use a linebacker to cover Cook, so that is the mismatch, and that is who Bradford decides will get the ball. 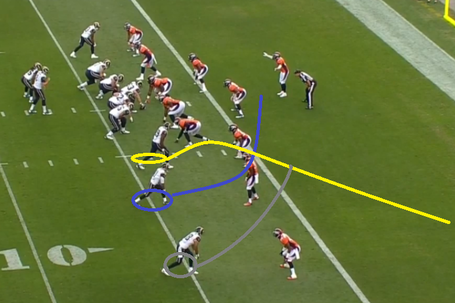 The Rams run basically a double pick for Cook, and Bradford will throw a jump ball knowing that no linebacker on the field will be able to jump with Cook. 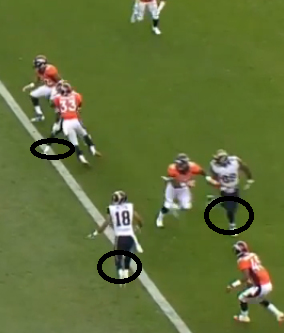 The scary part of the coverage is that Pettis ends up being open because the corner bails on him so early to help cover Cook on the jump ball and Bradford still makes the throw to Cook for a touchdown. 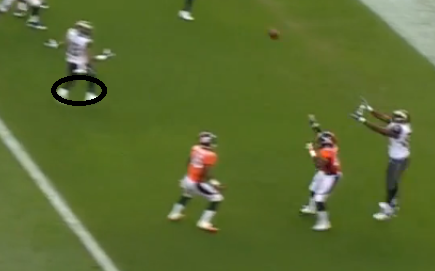 What the Rams will force the Cardinals to do is find a linebacker to cover Cook, or commit a safety to him.

If that happens, the Rams will look to take advantage. 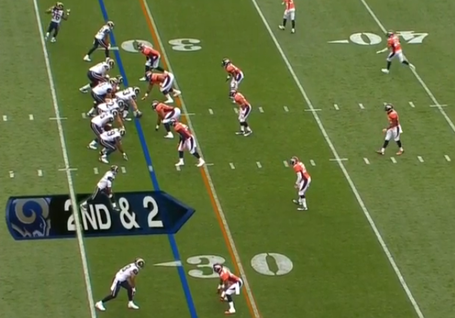 Again the Rams come out 11 personnel and shift to an empty backfield.

They put the strength to the wide side of the field again, and Tavon Austin is in the slot.

With Cook and Pettis also on the strong side of the formation, the Rams will look to isolate Cook and Austin in the flat, giving Bradford multiple options in the same are, similar to what Bruce Arians likes to do vertically down the field, this is just a shorter, lower risk version. 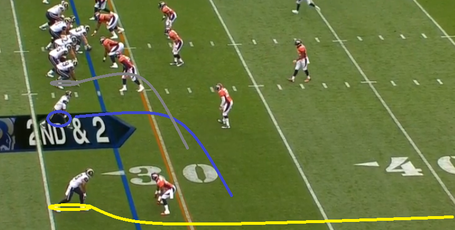 If the defense shows cover two, then Bradford looks to go to Pettis, who would be down the sideline. In this case, because it is man coverage, Bradford goes to the player with the opportunity to do the most after the catch, and in this case it is Austin.

Austin gets the ball and when he gets turned around has four yards between he and the nearest tackler, which is WAY too much space for Austin to have, and a three yard throw turns into a 12 yard gain.

A play that hurt the Cardinals in 2012 and one that will be a major weapon for the Rams in '13 is the deep ball to Chris Givens.

The Packers are playing man 2, with two deep safeties, and man across the rest of the way, the problem is that the Packers safety either bites on the play action fake in the run game, or comes up to help as the Rams flood the deep middle of the field because they've called a blitz with their inside linebacker (something the Cardinals have done in the preseason).

Without All-22, this is speculative, but the deep safety on Givens side of the field is not anywhere near help and the corner, even with an eight yard cushion, gets blown by and Givens catches one deep for the Rams.

This play is something we have seen firsthand, and the Rams look to it when you get a physical corner who isn't the best turn and run guy, and in this instance the Cardinals would have Jerraud Powers lined up across from Givens (based on what we've seen in the preseason).

The key to stopping the Rams offense is simple in theory: Never let anyone get behind you.

Always keep Austin, Cook, and Givens in front, the free safety, in most cases Rashad Johnson, has to be the safety valve in this defense.

As soon as he abandons his area because the Rams have been moving the ball short they'll look to hit a homerun, something they did with Givens in the shot above.

Mathieu is as good of choice as any to play man up on Austin, but he still was beat numerous times in their match up in college.

The Cardinals linebackers haven't exactly been inspiring in coverage thus far, which means help from Johnson and Yeremiah Bell is going to be at a premium.

Whether it's going more zone than the defense has shown in the preseason, or making sure there are always two deep, the scheme is simple.

Of course, it's easy to write and talk about, but the execution will be what is key.