Seth takes a look at what needs to happen for a Cardinals victory in week four.

Share All sharing options for: Cardinals v Buccaneers: What to watch as Arizona battles rookie Glennon

It’s an important game for the Bruce Arians era, well at least the first part of his story, as this game will basically seal the fate of the Arizona Cardinals with a loss.

You see, as was tweeted to me by a good fan, there is only a 16% chance the Cardinals make the playoffs if they lose in Tampa today, in other words, start following the best players at the biggest needs for the Cardinals 2014 draft.

While that may seem a bit overkill as only one-fourth of the season will be over with, but the numbers don’t lean in the Cardinals favor, especially with the division the Cardinals call their own.

That means the offense needs to find a way to get on track, and the defense needs to continue to make plays, and get the offense in good position, something they did numerous times throughout the first three games.

How does that look?

The Jets don’t run an offense like the Cardinals, but they have some plays that end up looking similar in the end to a lot of the Arians "Flood" passing attack.

In this 12 personnel the Jets will clear out the field by running the pair of receivers deep and dragging, notice that they only have four receivers in the route, leaving six blockers in to stop the pass rush. 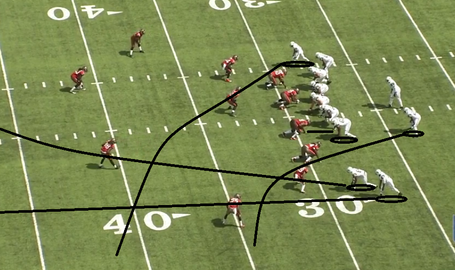 This is a 16 yard route and ends up being a 24 yard gain for the Bucs.

While this isn’t necessarily deep, this is the type of routes that the Cardinals will be able to get open against the Bucs defense when they drop into zone coverage, especially with someone like Larry Fitzgerald and Andre Roberts dragging across the middle of that zone coverage. 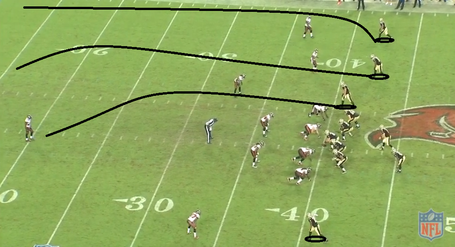 The Saints are driving down the field for a game winning field goal, flooding the field again, and they hit Colston on the deep post, an actual "deep" route of 20+ yards and gain 31 yards on the play.

The Bucs play man with a free safety deep, and Colston is able to get inside leverage on his defender. Michael Floyd and Larry Fitzgerald are similar in stature to Colston and both can win inside deep against man coverage.

If the Bucs continue to keep Darrelle Revis on only one side, and do not have him shadow Fitzgerald all over the field, there will be multiple opportunities for the Cardinals to take shots down the field… If the offensive line can hold up.

The Bucs boast maybe the best offensive line in the NFL, and it has shown in their pass protection, but the key to this game will be stopping the Bucs running game as they unleash rookie Mike Glennon at quarterback.

The key to the Bucs running game is keeping the cutback lanes closed, meaning the Cardinals need to stay in their lanes and keep Doug Martin bottled up.

The Cardinals run defense has been one of the best in the league, only giving up 3.2 yards per carry this year, however they have faced the 31st, 28th and 24th ranked rushing offenses, so this week will be their biggest test to date, even though the Bucs are ranked only as the 16th best rushing offense in the league coming into the game.

Martin’s ability to change direction, run with power, and break long runs is something that the Cardinals haven’t faced yet this season.

They’ll likely lean even heavier on him in this game as they look to keep Glennon clean and in position for easy, short plays before looking to go deep.

Confuse Glennon in the secondary

The Cardinals possess one of the worst pass rushing defenses in the entire NFL, and the Bucs boast the best offensive line in pass protection, a match up not overly becoming of success.

The key to keeping Glennon confused is easier by making him move off his spot, but the likelihood of that happening without bringing blitzers from different angles and thus opening up passing lanes, is small.

Glennon is a slow, methodical, quarterback who isn’t always quick at diagnosing his reads and pulling the trigger.

When he does make reads quickly, he still has a slow wind up that tips his hand to what he will be doing, and despite having a big arm vertically, he doesn’t possess a live arm with the ability to put a lot of heat on his throws.

Glennon’s combination of slow mechanics and the Bucs reliance on an Arians like vertical attacking offense will allow the defense to make plays in the secondary, and by disguising coverages, rolling safeties late, and dropping multiple guys, at least six should be in coverage on every play, it will allow more players to break on that slow developing routes and the slower developing Glennon throws coming out.

If the Cardinals are able to do this it could lead to coverage pressures, hits and sacks, or the opportunity to make a play on balls delivered late or lacking the necessary zip to get to its target.

In the end the game comes down to whether or not the Cardinals run defense is truly one of the elites in the league, and if they can cause confusion for Glennon and the Bucs passing attack when on defense and finding a way to hold up at the point of attack to get the passing game going.

Last week the Cardinals didn’t want to exchange blows with the Saints because that plays into what they want to do.

Well this week, the Cardinals do not want to play a field possession, lean on the running game and defense and look to make enough plays on offense to win type game.

No the Cardinals need to open it up and get points on the board against a very good Bucs defense and force Mike Glennon to make a lot of throws.

Can the offense get going? Only if the offensive line allows them too.