Cardinals vs. Rams: 3 keys to an Arizona Week 1 win over St. Louis

Three keys to the Cardinals success this Sunday and a matchup to watch throughout the game (and for the next decade, if we’re lucky). Welcome to the 2013 NFL season.

Share All sharing options for: Cardinals vs. Rams: 3 keys to an Arizona Week 1 win over St. Louis

Alas, the season is upon us. No longer do we have to suffer through long Sunday afternoons of golf and NASCAR. No longer does the "Honey Do" list consist of 87 items every weekend. She understands. It's football season, and those gutters can wait until the spring.

For the Arizona Cardinals to beat the St. Louis Rams Sunday, these three things must be done. Are these three keys to the game the end-all, be-all of what must happen? Of course not. But without them, it will be difficult to walk away victorious.

The second meeting of these two teams last season, Rams defensive ends Robert Quinn and Chris Long were held sack-less. By that time, the offensive line had leveled out and was playing well -- not great, but much better than it had been early in the season.

But that first game, Week 5 in St. Louis with the No. 1 team in the conference rolling in, the Rams sacked Cardinals 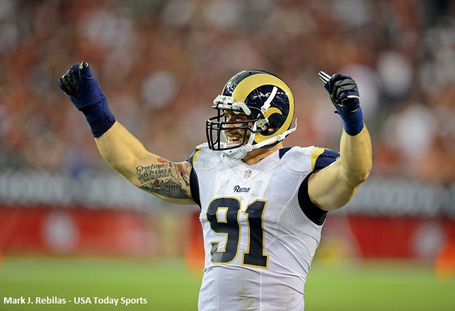 Quinn and Long combined for four of those sacks and 20 of the 46 total pressures on Kolb.

That was the beginning of the end for Kolb and the then-4-0 Cardinals.

This season, the tackles are better. Left tackle Levi Brown performed as expected this preseason (minus a bad date with Dwight Freeney), and right tackle Eric Winston is a very adept pass-protector.

Quinn and Long could switch sides from time to time, but for the vast majority of the day, Quinn will be matched up with Brown, and Long will have Winston.

There is probably an array of reasons for that, but none of them matter here. The fact is that in six games, Bradford is 1-1 against the Cardinals when scoring first, but he's 1-3 when Arizona scores first.

Coach Bruce Arians prefers having the ball at the outset, and this next stat is a perfect reason for that. Since 2000, the Cardinals are 43-39 (.524) when scoring first but just 37-89 (.294) when they don't. Considering the team's history, the former is more surprising than the latter.

A healthy running game will aid in that effort in the event the Cardinals are fortuitous enough to win the toss. Rashard Mendenhall ran well during the preseason and is "more than ready" for Week 1 according to Arians via Darren Urban of AZCardinals.com. Arians also said Ryan Williams is at full speed and that the team is "fully healthy" at running back.

We know Carson Palmer will throw it all around the yard, but without Mendenhall and Williams gaining chunks at a time, the offense won't work the way it should.

Be stout up front against the run 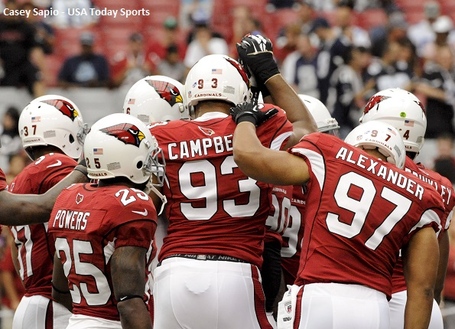 league in rush yards per attempt allowed last season -- they were No. 22, allowing 4.33 YPC.

St. Louis lost Steven Jackson to free agency this offseason when he signed with the Atlanta Falcons, but the Rams seem confident in starting 2012 seventh-round pick Daryl Richardson. There isn't much depth at the position behind Richardson, so for their sake, they better be right about him.

Arizona's new additions to the front seven should help improve the run defense. Linebackers Jasper Brinkley, Lorenzo Alexander and Matt Shaughnessy are notorious for their ability to stop the run. Karlos Dansby also is no slouch against the run, so executing Sunday should leave the team in a good spot.

If these two rookies' careers go as they are projected, we will see this matchup twice per season for many years. Tyrann Mathieu was asked by reporters recently about his matchup with Tavon Austin:

"He's not a real vertical guy," Mathieu said. "He kind of works within 10 yards. He's very shifty, very quick. People say he's fast. I think he's more quick than fast. I think if you stay square on him and really get in his face at the line of scrimmage, I think you can challenge him and make things rough on him."

Though both are smaller than your average NFL player, Mathieu has a distinct advantage in the physicality department, while Austin is quicker and faster. Which rookie can take away whose strength?

This will be fun to watch.