Cardinals vs. Rams: A look at the Arizona running game

Share All sharing options for: Cardinals vs. Rams: A look at the Arizona running game

As the countdown to kickoff commences for the Arizona Cardinals, one question continues to be on everyone's mind... Is the offensive line going to be able to protect Carson Palmer, and give the offense a chance to produce?

When you go back and watch the preseason there are numerous question marks that stand out along the line: Can Levi Brown win one on one against speed rushers? Is Daryn Colledge's leg going to allow him to play a full season? Is Paul Fanaika an NFL starter?

Those questions won't be answered in week one against the Rams, but it will set the tone for the season and give us an idea of just how far the Cardinals have left to go to be a player in the league.

The funny thing is, the passing game isn't what will win it for the Cardinals this week, it'll be if the Cardinals are able to set up the pass, by forcing the Rams to stop the run.

One of the things we saw in last year's Thursday night debacle against St. Louis was that the Cardinals did not have any semblance of an effective running, and with that came a pass rush fury that the offensive line couldn't withstand.

Now the Cardinals haven't exactly had a lot of luck rushing the ball as of late, but there were glimmers in the game versus the Chargers, and while Jonathan Cooper won't be there to help out, it wasn't always the power game that led to the effective running game. 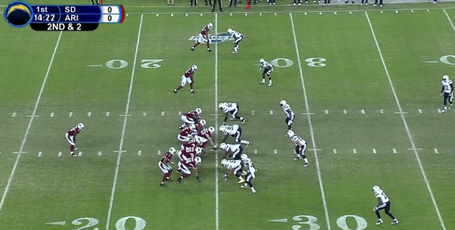 This is an 11 personnel tight, with Larry Fitzgerald in as almost an H-back on this play (Interesting to note that it was Fitz on this play and not Michael Floyd).

The blocking assignments are simple, as Fitz has to reach the defensive back that is lined up outside of the defensive end, and too do so he will allow the defender to come up field and dictate their own way they will be blocked.

From there it is about getting to their zone on the play, leaving the defensive backs unblocked, a normal aspect of most zone plays.

This is actually an inside zone play, but as the line blocks it opens up a bounce out lane to the outside, and that leaves Mendenhall one-on-one with one of the defensive backs, and because he bounces the run outside, it ends up being with a corner.

As Mendenhall bounces outside there is only one defender left to beat, and that is an expectation of the scheme, that running backs can beat defensive backs in those situations, but the main thing that should be noted is that the Cardinals have all the blocks on the line made, which allowed for the bounce outside.

Even though the play wasn't ran as "designed" it still was effective because it was blocked correctly, and more importantly blocked well.

Even with Alfonso Smith running the ball, we saw the Cardinals utilizing the zone scheme to get favorable match ups and give the running back multiple choices on holes to run through, which is what the strength of the zone scheme is.

On this play the Cardinals are in 12 personnel tight, with Michael Floyd acting as the H-back on the play, and the tight ends in a double formation to the strong side, effectively giving the Cardinals three additional blockers to the play side versus only three players, the combo block is off the left tackle, as he needs to get to the linebacker to seal the linebacker which will dictate the hole the running back will use. 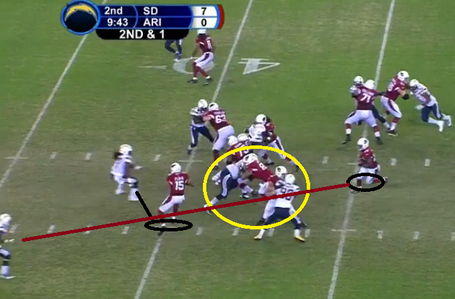 Housler and Levi drive the defensive end off the ball, which allows Levi to get to the second level.

As bad as Housler has been in the passing game, he has been a pleasant surprise in the run game, and Jim Dray, the other tight end in the set, does an excellent job of turning the outside linebacker.

Michael Floyd gets all the way to the secondary in order seal off the safety and again we'll see the running back put in a one on one situation with a defensive back.

The Cardinals offense may be a passing offense, but the effectiveness of their running game will dictate how often they are able to get into their deep passing sets, and get the chunk plays down the field that Bruce Arians wants to utilize.

If the running game is unable to slow down the pass rush, it could be a long afternoon in St. Louis, but the way that the Cardinals offensive line blocked in those zone schemes should make fans feel confident that no matter who is at running back, it can be effective.