Cardinals vs. Rams: The good, the bad and the ugly from Week 1

A look at the game with hindsight for what went well, not so well and terribly.

Share All sharing options for: Cardinals vs. Rams: The good, the bad and the ugly from Week 1

Game 1 is in the books and it comes in a bitter defeat by a division rival in the St. Louis Rams.

The Cardinals played well at times, but some of the concerns that fans had during the off season reared their ugly head in game one of the regular season, leading to a blown 11-point fourth quarter lead.

What happened in game one? Let's get into the Good, the bad, and the ugly versus the Rams.

While Tyrann Mathieu was excellent against Tavon Austin, limiting him to only 41 yards on his six catches, he doesn't get the good spot this week.

The good goes to the reemergence of Larry Fitzgerald and the continued maturation of Andre Roberts and Michael Floyd.

Fitzgerald didn't go anywhere and the talent of Roberts and Floyd was never really a question, but getting with Arians and Palmer seems to have reinvigorated an offense that was beyond terrible in 2012.

On Fitzgerald's second touchdown pass the Cardinals came out in 10 personnel, with Fitz on the near side of the field in the slot with Floyd lined up out wide on the same side of the field.

This lead to one on one coverage with Cortland Finnegan getting matched up against Fitzgerald, a five inch height difference, if those listings are accurate, and a clear advantage for the Cardinals that Palmer found and exploited.

Finnegan misses Fitzgerald off the line, and this leads to Larry winning within the first five yards, and Finnegan in a trail position, where he's vulnerable as long as Palmer puts the ball ahead of Fitz.

The safety bites on the other slot man in the route, at least that's the only thing that makes sense with no run fake and no other route options. 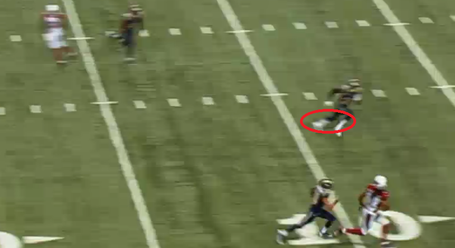 The safety, for whatever reason, gives up on the play and Palmer puts the ball where only Fitz can get it and the plays over. 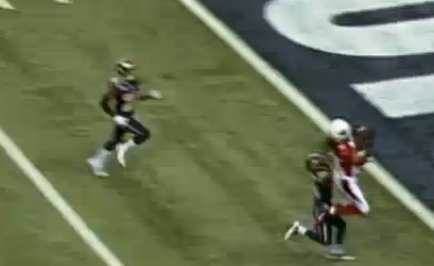 This may surprise some people, but Levi Brown makes the bad instead of the ugly simply because we all knew what we had in Levi Brown.

Levi was beaten by speed easily three times, resulting in two fumbles, one of which was not recovered by the offense, and that lead to the game tying field goal by the Rams.

The question becomes, why are the Cardinals leaving Levi alone on the edge on a third and nine and going five wide? 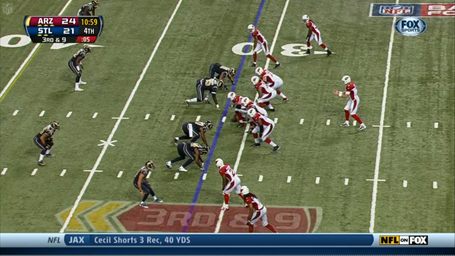 The set up was simple enough, but on third and nine, why go with an empty backfield, not tight end look?

Why not at least give Levi some help with a chip or just keep one receiver in to help him after he's already been beaten like a drum during the game?

It was an odd call, as it sent four receivers into routes over ten yards, and only one receiver short. 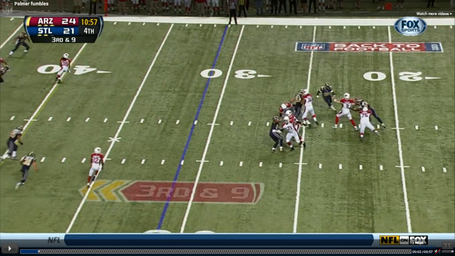 If you notice the time stamps, it was a little over two seconds from snap to sack for the Rams, that means those routes were never going to work with the protection that was called, and leaving Levi on an island was as much the fault of the coaching staff as it was the execution by Levi himself.

"That start this weekend as well, with a loss to the St. Louis Rams, as Jared Cook takes advantage of a limited pass coverage line backing core, and Chris Givens gets a deep ball over Jerraud Powers and the Rams hold off the Cardinals in a mini shootout with a 28-24 win."

That's what was said before the game started, and unfortunately that was correct.

The Cardinals lack the athletic ability to stay with the new breed of NFL tight ends, until Daryl Washington comes back, and that leads to bad things happening when Yeremiah Bell lines up across from someone like Jared Cook.

This play was simple, the Rams cleared out the by running the wide receiver into the deep safety leaving Bell matched up alone with Cook with no help. 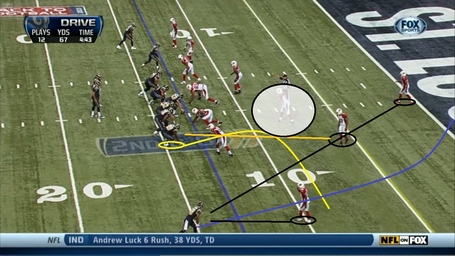 Dansby is in zone in the middle of the field, likely keying on the running back, and that makes him useless on the play. 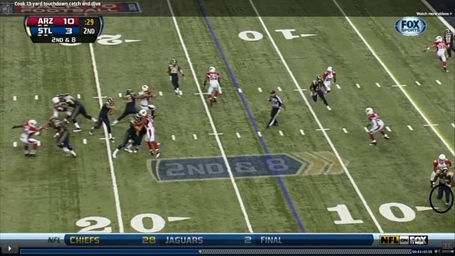 Much like when Fitz caught the ball, Bell was caught behind Cook, leaving him helpless when Cook caught the ball, also notice the pocket the Rams were able to create for Bradford as the result of no pass rush pressure.

Cook ate alive the Cardinals linebackers and when the defense started to go to Bell as the main cover man later in the game against Cook, the beatings unfortunately continued.

There was a lot of good to take from this game.

The Cardinals were able to have a semblance of a running game, which allowed for Palmer to get the ball deep at times, but he misthrew some balls, and those missed opportunities will be fixed as the season goes along and Palmer and the receivers get more comfortable in Arians' offense.

There also is the idea that things will get better defensively as Daryl Washington comes back, and the Cardinals get more accustomed to Bowles' schemes.

Of course that will coincide with the meaty part of the schedule, but it should make for an entertaining season.

Player of the game: Larry Fitzgerald

Goat of the game: The secondary... which leads to.

The Cardinals need to figure things out quick in the secondary, as well as get the pass rush together, as the Lions will make the Rams offense seem tame.

Offensively, just figure out a way to keep Palmer standing, and that means helping out Levi as much as possible.