Bruce Arians did in fact change history as a head coach

Arians did something that no other first time coach 60 or older has done -- win.

Share All sharing options for: Bruce Arians did in fact change history as a head coach

Last offseason, I wrote about a stat/fact I found in the 2013 Football Outsiders Almanac. It was about how Bruce Arians had history against him, not only as a coach of the historically bad Cardinals, but also because head coaches getting their first head coaching job age 60 or later have never...NEVER done well.

In fact, here is the graphic to illustrate the poor history of such coaches. 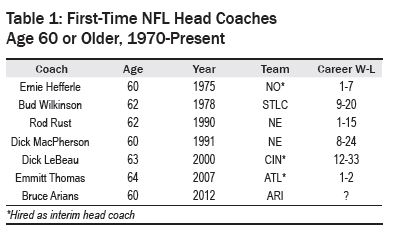 Arians led the Cardinals to 10 wins in one season. Wilkinson has the highest winning percentage of the group at .310. With his one year of success, as long as the Cardinals don't go 0-16 next season, he will remain at the top of the list.

Maybe it's because he is "60 and sexy," as he said when Carson Palmer was introduced to the media. Maybe it's because he just didn't get his first NFL head coaching job early enough. Whatever the reason, he has changed history in one phase and, if he can keep it up with Arizona, he will continue to change history for the franchise.