Cardinals vs. 49ers: History between the two franchises goes back a ways to the bay

A look back at the history between the two teams

Share All sharing options for: Cardinals vs. 49ers: History between the two franchises goes back a ways to the bay

How far back can we trace the history between the Cardinals and the 49ers? To Sunday November 18th, 1951, Kezar Stadium, San Francisco, when the Chicago Cardinals were victorious 27-21 behind the passing and running of Charley Trippi. Wearing jersey #62 and listed as a QB/HB, Trippi was later elected to the Pro Football Hall of Fame and also has his place on the Cardinals' Ring of Honor today as a member of the Cardinals' one and only championship team of 1947. So hats off to Charley Trippi.

In that first meeting with the 49ers, both teams averaged more than five yards per carry as the visiting Cardinals out-rushed the 49ers 248-231 that afternoon by the bay. This was the second season for the San Francisco 49ers as a member of the National Football League, who along with the Cleveland Browns and Baltimore Colts joined the NFL the previous year -- jumping from the newly-defunct, short-lived AAFC. Interestingly enough, two other teams from the All-American Football Conference who elected to fold rather than carry on with pro football were named the New York Yankees and Brooklyn Dodgers. 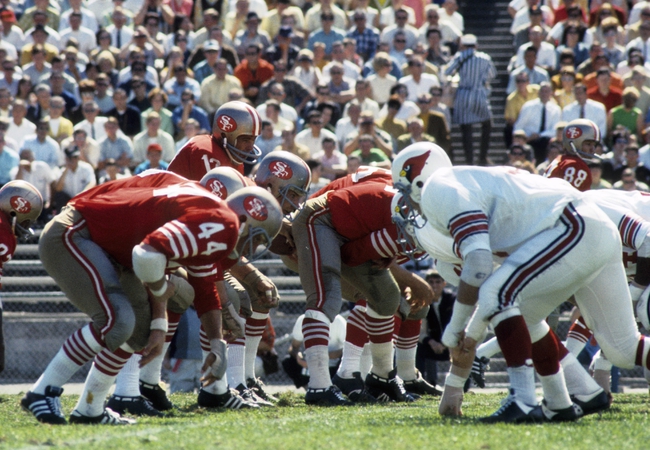 Over the years, many great players wore both Cardinals and 49ers uniforms in their careers including John David Crow, Sonny Randle, Abe Woodson, Sam Silas, Anthony Clement, Leonard Davis, Tim McDonald, Joe Nedney and Garrison Hearst.  Current connections between the teams are former Cardinal Anquan Boldin and former 49er Ted Ginn, while cousins Andre and Bruce Ellington will face each other for the second time this season.

The teams have never met in the playoffs but they do share something unique, being the first to play a regular season game outside the borders of the United States. A new NFL attendance record of over 103,000 fans at Azteca Stadium, Mexico City saw the Big Red become the first NFL team to win on foreign soil beating the 49ers 31-14 (click here for highlights).   Two touchdown strikes from Josh McCown (385 yards passing) to Larry Fitzgerald and Anquan Boldin were added to six field goals by Neil Rackers under the lights that night in 2005.

Through the 1970's the Cardinals won 7 of the first 10 meetings between the teams (5-1 by the bay), but the emergence of the Walsh-Montana-Rice-Young dynasty during the 80's and 90's ended that trend and contributed greatly to the current 49er advantage of 28-18 all-time. There was one great exception during that period though that many may remember when ...

The Cardiac Cards Arrive In The Desert

Perhaps the best game ever between the teams and one of the most exciting finishes ever seen at Sun Devil Stadium came in the first season of the Phoenix Cardinals ('88), and the last complete game for Neil Lomax (the Cardinals 2nd leading all-time passer). In the second largest Cardinals comeback ever (down 23-0 in the 3rd quarter), the Big Red fight back against that year's eventual world champions to win 24-23 with a touchdown strike at the buzzer to Roy 'Jet Stream' Green.

The place went mad and the cups were flying!

Neil Lomax led the Cardinals to a 7-4 record that first year in the desert, but sadly the very next week his career was cut short when he went down in his prime (hip replacement). In this writer's opinion, the most devastating injury in memory for the franchise and the team then proceeded to lose their final five games of the season. As it turned out, it also marked the beginning of exactly 20 years of lean times in the desert.

* The St. Louis Cardinals return to Kezar Stadium in '64 and beat the 49ers 23-13 behind the passing of Charley Johnson to receivers Sonny Randle and Bobby Joe Conrad. Multi-purpose yards by John David Crow and an interception by Pat Fischer helped seal the deal. The Big Red finished the year at 9-3-2, good for 2nd place in the NFL Eastern Conference behind the 10-3-1 Cleveland Browns. Being as how the only postseason game in those years was the league championship game between the two conference leaders (seven teams each), the Cards fail to make the playoffs. 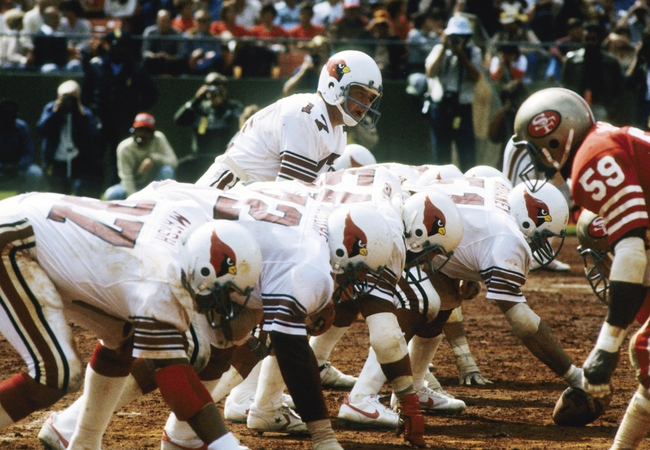 * Jim Hart (the Cardinals all-time leading passer) leads yet another Cardiac Cardinals comeback with a 4th-quarter 77-yard strike to Mel Gray to tie the game under the Arch as the St. Louis Cardinals go on to win in overtime 23-20 on the leg of Jim Bakken (the Cardinals all-time leading scorer). Terry Metcalf (check out the video) and J.V. Cain (retired number 88) also scored touchdowns that day in a game that moved the Cards to 6-2, and on their way to a 10-4 record (14 game season) that failed to earn the team a wildcard berth in the 1976 playoffs (the crime of the century).

* Marcel Shipp tugs the Arizona Cardinals along in the wake of his 165 rushing yards on 35 carries in Tempe and the Big Red go on to win 16-13 in overtime on Tim Duncan's 39 yard field goal in 2003. The Cardinals rush for 221 total yards but the only touchdown comes on a Jeff Blake one-yard scamper.  This was the third of six overtime games in the two team's history in the last season for Cardinals head coach Dave McGinnis.

* Throwing for a whopping 484 yards with 34 completions on 48 attempts, Kurt Warner's two touchdown passes to Larry Fitzgerald (156 yards receiving) and the rushing of Edgerrin James help bring the Cardinals back to force overtime in 2007 on a Neil Rackers field goal at the end of regulation in Glendale, Arizona. 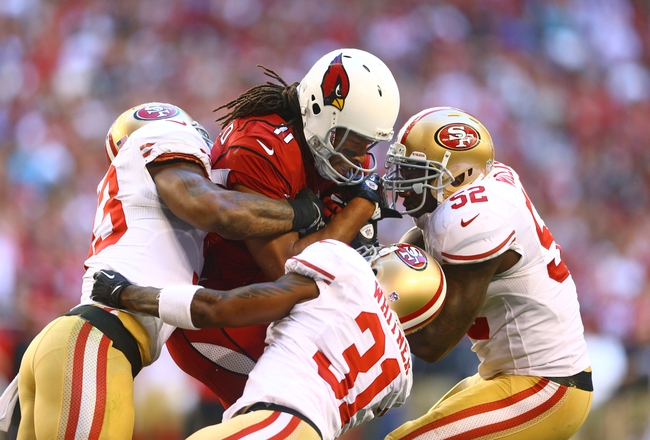 * On the Cardinals' road to the Superbowl in 2008, the 29-24 victory over the 49ers moves the team to 6-3 on the year. Warner's three touchdown tosses to Anquan Boldin (2) and Larry Fitzgerald (1) were surpassed by Steve Breaston's 124 yards on 7 catches at UofP Stadium. Karlos Dansby and Adrian Wilson chip in with interceptions for the Big Red.

* The 1975 St. Louis Cardinals first became known as the Cardiac Cardinals in route to a 11-3 record and NFC Eastern Division title with seven wins coming in the last minute of play.

* In what many consider to be the best offensive line ever, the 1975 Big Red Line (pictured above) allows an all-time NFL record-low seven QB sacks while plowing the way for 164 rushing yards per game.

* Nine players wear white helmets with Cardinals stickers on the sides in the 1976 Pro Bowl game (seven offensive, one defensive, one special teams).

* Used as a two-way player in 1981, Roy Green wearing #25 records both a touchdown pass reception and a game clinching interception against the Redskins.

* Neil Lomax leads the Cardinals to 3 touchdowns in the final two minutes to beat Dallas on opening day 1987 in St. Louis (the Cards only needed 2 touchdowns, but hey it was the Cowboys). 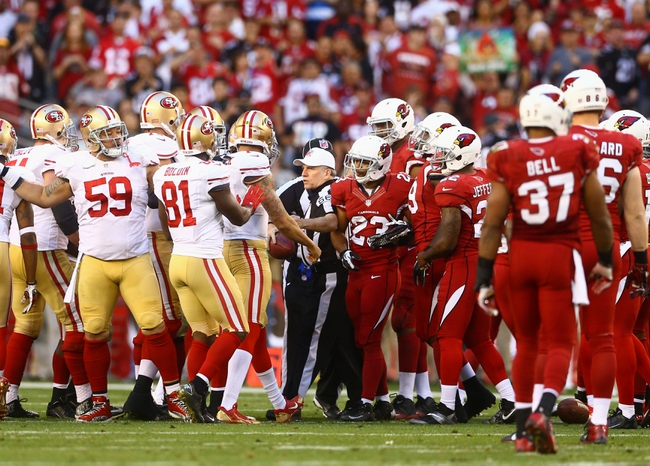 In a rematch of a game earlier this year in Glendale that saw two Drew Stanton to John Brown TD's and three Chandler Catanzaro field goals in a 23-14 Big Red win, the Cards hope to sweep the season series for the first time since 2008 (having also swept the 49ers in '05 and '06).

It's almost time to fly away to the bay to snap on the chinstraps and see what history has in store for us in the 47th edition of Cardinals vs. 49ers.