After recalling a Bruce Arians quote, I had to scratch an itch.

Since it is the offseason, I had a few minutes to scratch an itch I had. I wanted to know about the blown onside kick that led to Larry Fitzgerald's concussion. I recall Bruce Arians saying that a rookie blew his assignment (although I cannot find that quote exactly now), so I went to NFL Rewind to see what happened.

It turns out that Arians wasn't just spinning things. It was, in fact, a rookie who could have done two different things that would have prevented the hit on Fitz that led to a fumble and the Tennessee recovery near the end of regulation in the game against the Tennessee Titans. It was running back Stepfan Taylor.

Picking out "the rookie" was easy. He was the only rookie on that side of the field to protect Fitz, which tells you a lot about how much the team trusts him on special teams. 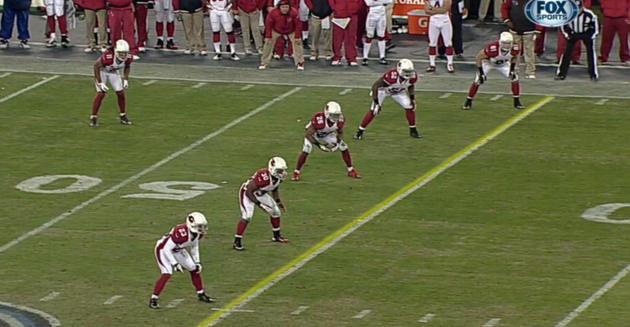 You have, from the sideline, Jim Dray, Jasper Brinkley, Rashad Johnson, Taylor and Bryan McCann -- all vets except for Taylor.

What happens? As you can see below, Dray, Brinkley and Johnson all engage with a Titans player, except Taylor. He didn't get over there quickly enough.

The man that Taylor didn't get to is the guy that gets to Fitz (Zaviar Gooden) as he leaps up to attempt the catch. 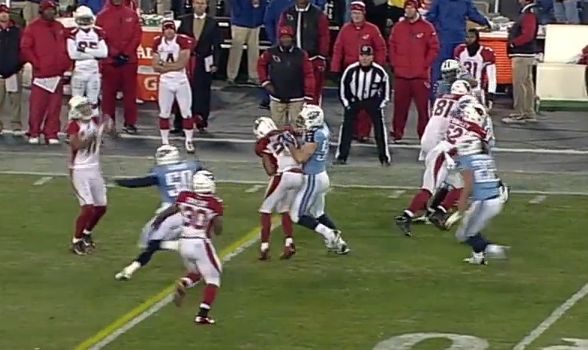 Once Gooden gets to Fitz, you will notice that Taylor has slowed up, while running back Jackie Battle for the Titans sees an opening to get to Fitz. Taylor does not go to engage Battle.

Taylor does not block Battle, so when Gooden has upended Fitz, Battle goes in and makes the hit, where his helmet makes contact with Fitz', causing him to drop the ball. 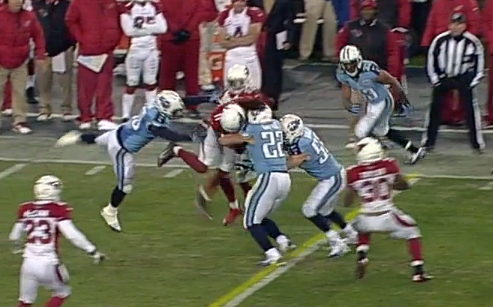 The rest we know. The ball comes loose, Tennessee recovers and then go down to score the tying touchdown. Luckily, the Cardinals win in overtime. Fitz is lost for the remainder of this game, but comes back to play in Seattle.

As for Taylor, I imagine that this mistake (or pair of mistakes) was hashed out in film with the team. I imagine this won't be something he messes up again, at least we should hope so.