Looking at three plays from Arizona's Week 1 game against NFC West-rival St. Louis. How and why were they successful? Shaun Church's in-depth analyses provide the answers.

Share All sharing options for: Arizona Cardinals 2013 season review: What worked during Week 1 loss to Rams?

Welcome to the first installment of an offseason-long review of the Arizona Cardinals 2013 season. Each week, we will go over a new game, beginning here with what went right during the Week 1 loss to the St. Louis Rams.

These pieces are intended to show how Bruce Arians' offense grew and improved as the season progressed.

From great play-calling and individual effort to those calls and player gaffes that left us scratching our heads, we will go beyond the highlights to illustrate the evolution of the downfield passing attack that became more conservative throughout the year, while also highlighting a running game that improved as a rookie cut his teeth.

Here is what worked against the Rams.

With 12 personnel in the game on the first play of the second quarter, Arians dialed up a two-man route against a Cover 1 that led to the first highlight of the season. It's not uncommon to see a deep shot from near midfield on second down, with the offense knowing it has third down to make something happen.

If the deep ball fails on second down and the offense cannot gain a first down on third, just punt the ball away and play the field-position game -- especially with a good defense. 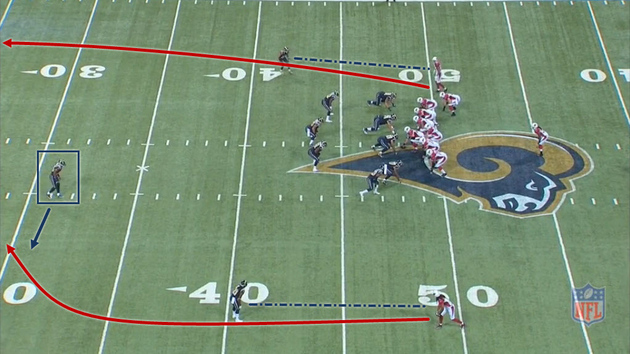 To start, you can see the two-man route called by Arians. It's Michael Floyd on the go and Larry Fitzgerald on the deep post. Cornerbacks Cortland Finnegan (covering Floyd) and Janoris Jenkins (covering Fitz) are in man coverage and playing off the ball, anticipating the deep routes.

That's strong safety T.J. McDonald in the blue box, who helped Jenkins with Fitzgerald, leaving the smaller Finnegan on the larger Floyd. 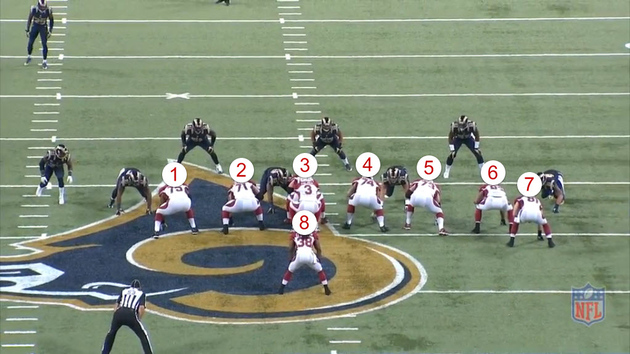 The story here, however, was not the route run by Floyd. It wasn't even about the throw from quarterback Carson Palmer. This play was about the protection Arians called to ensure Palmer and Floyd had enough time to connect down the field.

With a two-man route and a quarterback to throw the ball, that means it was an eight-man protection. The offensive linemen, plus tight ends Kory Sperry and Jim Dray, as well as rookie running back Andre Ellington -- who was in on his first NFL snap, by the way -- all stay in to protect Palmer while Floyd worked his way downfield. 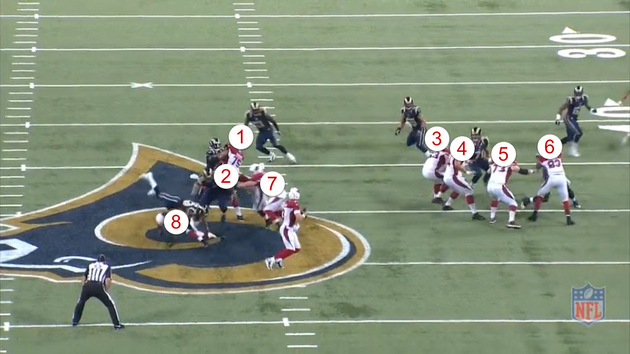 The result of such great protection, of course, was Floyd's one-handed catch over Finnegan. Poor, little Finnegan was picked on all afternoon in both the passing and running game.

In fact, he's a part of all three plays mentioned here today -- by complete coincidence, for what it's worth.

The running game did not get going as planned in this game. With a new starting running back, essentially three new offensive linemen and an entire new coaching staff, it assuredly would take some time to get everyone in rhythm and doing what they're supposed to do on every play.

Rashard Mendenhall had his share of problems in 2013, from missing wide-open running lanes -- seemingly avoiding them at times -- to doing just what you're about to see. What he did on this play worked, but it was not always the right call; in fact, cutting to his right was often the wrong choice, as it went hand-in-hand with the first issue mentioned. 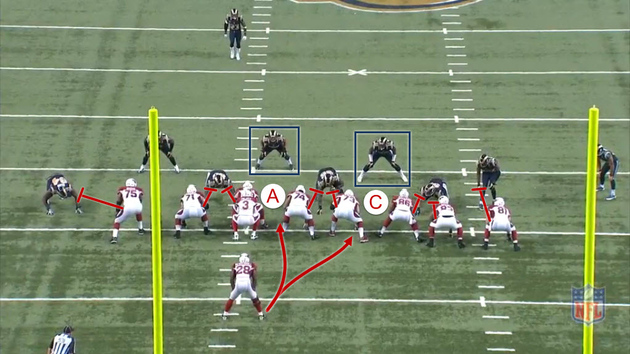 This play was designed to give Mendenhall the option of running through the A-gap or the C-gap, depending on which was open. With a struggling offensive line, it's a good idea to have more than one option for the running back. The thinking is that two gaps are harder to close off than one.

Except on this play, St. Louis had the perfect play called to counter the two-gap option -- a run blitz. 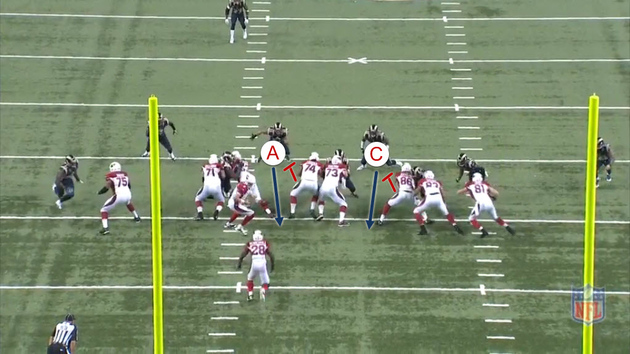 Linebackers James Laurinaitis (A-gap) and Kevin Ogletree (C-gap) took off toward the line of scrimmage at the snap, ruining any thought of a Mendenhall option.

Both Colledge and rookie tight end D.C. Jefferson were forced to abandon their original assignments -- picking up a blitzing linebacker assuredly was a secondary assignment -- to take on Laurinaitis and Ogletree. They did so perfectly but left nowhere for Mendenhall to go. 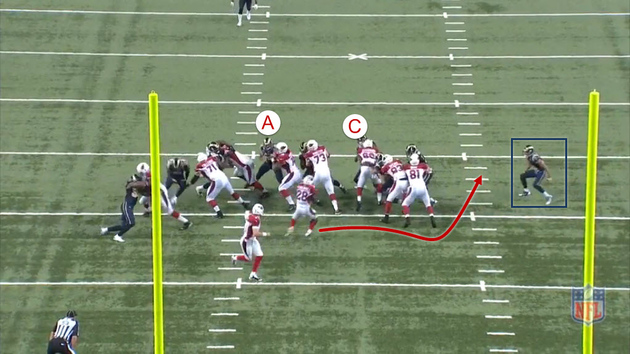 That's where Mendenhall's habit of cutting to the right came into play and saved him from sure failure. With nowhere to go, the only thing standing between him and a first down on 2nd-and-1 was little Finnegan. Poor guy.

Mendenhall runs over the veteran en route to a 9-yard gain, even knocking the overmatched cornerback's helmet off in the process.

Palmer's first touchdown pass as a member of the Cardinals was to Fitzgerald -- from four yards out just two plays after Floyd's one-handed catch. His second was also to Fitzgerald and covered 24 yards.

Just before its culmination, this touchdown drive had covered 59 yards on 10 plays with 36 of those yards coming on 4-of-6 passing from Palmer. 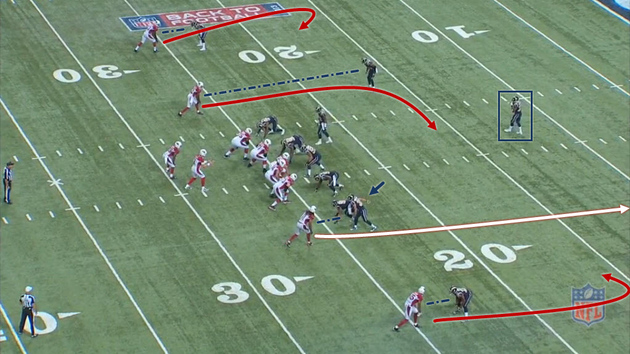 The first option on this play was Fitzgerald. His go-route was first and foremost, and it was all that mattered. The second option likely would have been Andre Roberts, who ran a 10-yard dig -- he would have been Palmer's next read had McLeod helped Finnegan with Fitz. After that, it would have been a free-for-all -- a "get-open-if-you-can," if you will.

St. Louis was once again in a Cover 1, only this time McLeod covered deep while McDonald took Roberts. The blue arrow on Finnegan is pointing out that Finnegan had just motioned to McLeod to help him in anticipation of Fitzgerald's deep route. 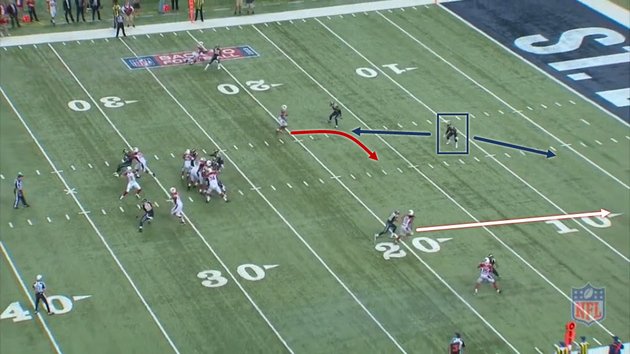 As you can see, McLeod was in a bad spot. Having a split second to choose the underneath route or the deep route, he froze, confused on which way to go. Palmer saw this and was already winding up to uncork the pass toward the goal line at the time of this screen shot. 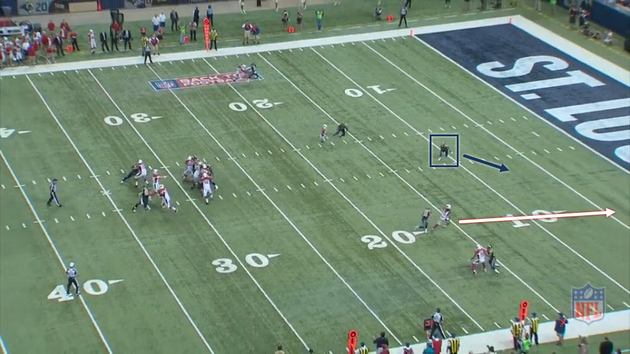 McLeod finally reacts to Fitzgerald's deep route but, by now, it was too late. Had he paid attention to Finnegan before the snap, this touchdown on a 3rd-and-5 play may have gone to Roberts and merely converted a first down.

Instead, Palmer connects with Fitz for the 24-yard score, leaving Finnegan with a more-than-forgettable day despite his team rallying late to win.

Again, stay tuned all offseason for what worked and what didn't for the Cardinals during the 2013 season. This was Week 1. It's going to be a fun summer.