Looking at what failed for the Cardinals as they dropped the 2013 season-opener to the Rams.

Share All sharing options for: Arizona Cardinals 2013 season review: What failed during Week 1 loss to Rams?

You've seen what worked for the Arizona Cardinals in their Week 1 loss to the St. Louis Rams. (If you haven't seen it, click that link.) Now it's time to go over what didn't work and ultimately led to the 27-24 defeat.

Quarterback Carson Palmer threw well for the most part in his Cardinals debut, completing 26 of 40 passes (65.0%) for 327 yards, two touchdowns and an interception for a 96.6 passer rating.

But that interception proved costly, leading to a go-ahead field goal in the third quarter. We'll get to that in a minute, as first we must cover Palmer's protection and a running play head coach Bruce Arians tried twice and saw fail both times.

Here is what failed against the Rams.

We'll be going over two plays in this segment, because they are the exact same play. Same formation, same personnel -- everything. The first, which was the first play the offense ran, netted no gain. The second, which came on the first play of the second drive, netted just two yards.

Here is the first. 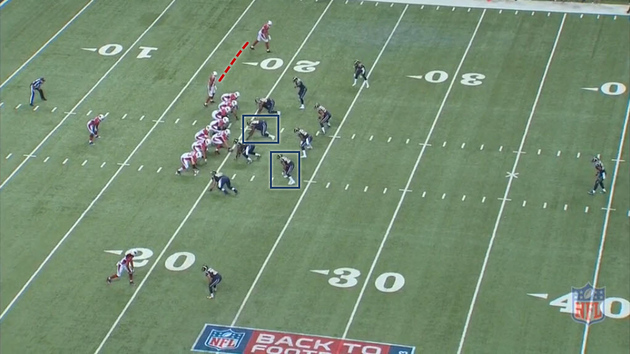 You can see a transposed Michael Floyd down in the slot. He came in motion before the snap and was set to throw a crack block on safety Rodney McLeod (in the bottom blue box), who ended up making the play. 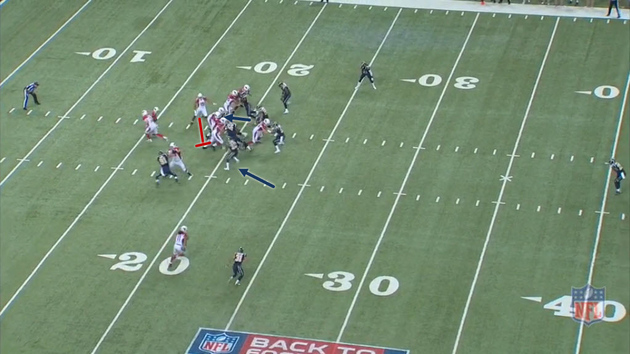 At the moment running back Rashard Mendenhall received the handoff from Palmer, Floyd was in position to take on McLeod and get him out of the way, opening what would have been a gaping hole for Mendenhall. But defensive tackle Michael Brockers (top blue box from the first picture) blew up left guard Daryn Colledge, setting off a chain reaction that completely ruined the play for Arizona. 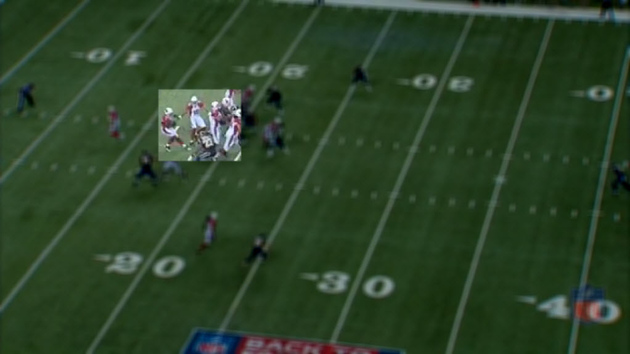 Floyd pulled up at the last second, fearing he would run into Mendenhall (with no running lane, he stopped and attempted to change direction). That gave McLeod the opportunity to take down the first-year Cards back for no gain.

Floyd started late anyway, so this play may have been doomed even if the lane was there. If Colledge won his battle with Brockers, McLeod may have been able to force Floyd back into Mendenhall as he crossed Floyd's back, thus throwing a wrench into things. All hypothetical, of course.

Onto the second play. 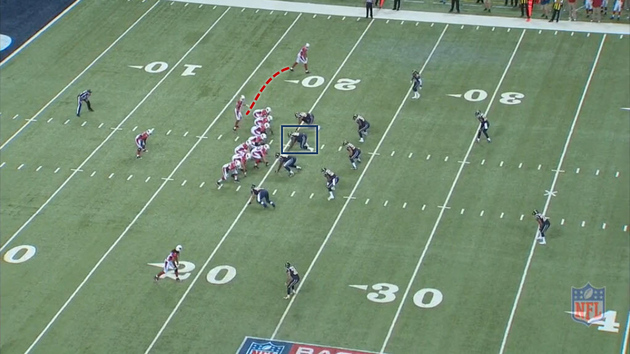 Again, Floyd is sent in motion with the same intention as before: throwing a crack block.

We'll take a look at this play from behind to show you how Brockers once again ruined this very basic run play. 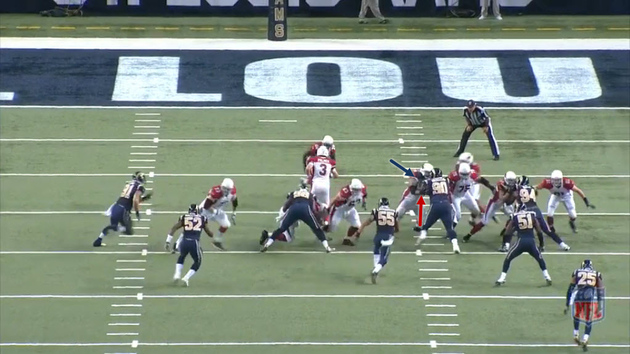 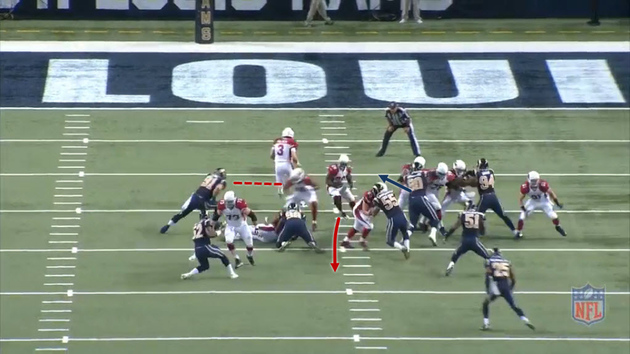 And with leverage, Brockers easily shoved Colledge out of the way as Mendenhall entered the running lane, making the play with fellow defensive tackle Kendall Langford.

This play could have gained a nice chunk if Colledge had his right hand to the inside Brockers' left arm. It's amazing how many details go into football, isn't it?

This game was the beginning of the end for Levi Brown in Arizona. The struggling left tackle surrendered three sacks to Rams defensive end Robert Quinn -- three weeks later, the Cardinals traded Brown for literally nothing (originally a late-round conditional pick that turned into nothing once Brown went on IR).

We won't spend too much time on these, because all three are the result of Brown being thoroughly manhandled by Quinn on speed rushes. However, we will briefly go over what happens when an average left tackle sees a speed rush over and over again, then sees something new.

The first sack by Quinn was nasty. He ran by Brown as though the 324-pound tackle wasn't even there en route to forcing a fumble by Palmer. Brown did record a fumble recovery on the play -- a poor consolation prize after the beating he had just received.

The second was just as bad as the first. Brown has always been strong enough to handle power pass-rushers just fine, but Quinn is a speed guy, and Brown's feet get in the way when he needs to hurry his steps.

Sack three: another speed rush. This time, Quinn gave a little dipsie-doo as though he was about to switch from a speed to a bull rush, then blew right by Brown again. Another forced fumble, this time recovered by Rams defensive end Chris Long.

And finally, we have what happens when a pass-rusher switches it up on a lineman.

After seeing nothing but a speed rush the entire first half and most of the third quarter, Quinn went with a "cross the face" move. That is, he started out as though he was going to speed rush again, but as he planted his outside foot, he shifted his weight to dip to Brown's inside shoulder, "crossing his face" in the process.

Brown was anticipating another speed rush, so he shuffled to the outside as quickly as he could. But Quinn's move threw him off. The only thing Brown could do to save his quarterback from assured destruction was hold. And he got caught, negating an 8-yard gain.

Throughout the early part of the 2013 season, we heard a lot from coach Arians about how Palmer's interceptions were a result of miscommunication between quarterback and receiver. Most times, the receiver was said to have run the wrong route.

Palmer's first interception with the Cardinals was his own fault, however. 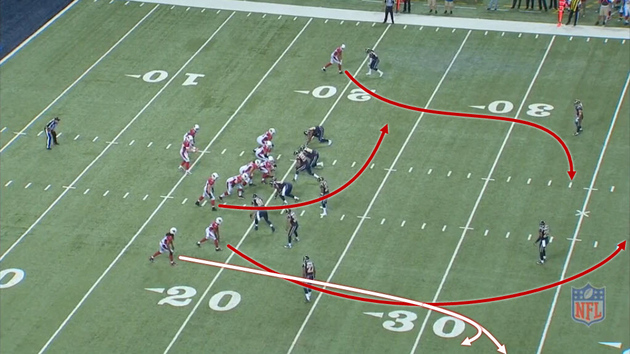 Here, Palmer had 11 personnel with wideout Andre Roberts in the slot to the quarterback's right. The play was designed for Larry Fitzgerald as an option route where he could either sit underneath over-the-top coverage or run a corner route between the cornerback and safety to break a zone. 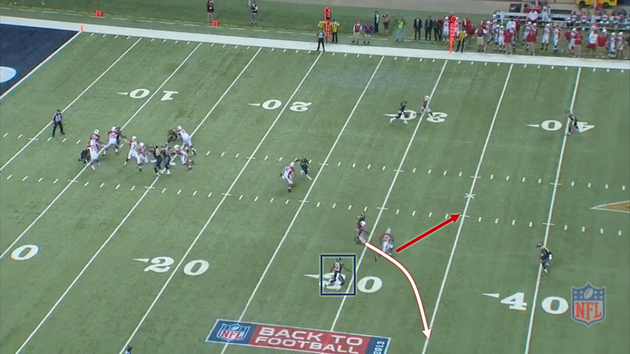 It was a straight man-to-man coverage to the top side, but to Fitzgerald's side, it was a zone -- as shown here by cornerback Trumaine Johnson with his eyes on Palmer and passing Fitz off to the deep safety. 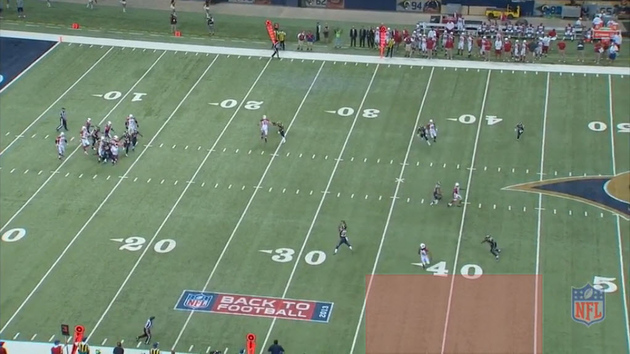 Fitzgerald runs the correct route, heading to the wide-open sideline. Johnson is right there for the easy interception, though, as Palmer expected Fitz to stop and turn instead of break outside.

From the GIF, you can see safety T.J. McDonald sliding toward the middle of the field as Roberts completes his post route. That means Fitz's corner route would likely have been a big-time success had Palmer thrown it.

Stay tuned all offseason for what worked and what didn't for the Cardinals during the 2013 season. Week 1 was fun to break down despite the loss. Just wait until the winning begins...