A variety of information on the team's newest addition.

The Arizona Cardinals made some noise around the league by signing free agent cornerback Antonio Cromartie on Thursday. He joins the team like many over the past two offseasons -- on a one-year contract.

The salary numbers are never available immediately, but it wasn't long before Arizona Republic beat writer Kent Somers tweeted the information. According to his sources, Cromartie signed a one-year deal with $3.25 million, with another $500K possible if he plays in every game.

Once again, he gets a player to sign a one-year deal for less money than he ideally wanted.

One question that was asked more than once on Thursday was about the hip injury that hampered Cromartie during last season. In a conference call with the media, general manager Steve Keim indicated that the team's medical staff checked him out and said that he is fine.

Cromartie said to the media that he had a hip flexor injury that was fine by Week 12 or 13.

Keim said that Cromartie's skillset was a big draw. He explained , "The thing that is appealing to us is, in Todd Bowles' pressure scheme, his ability to play press man, and to have two corners like him and Patrick where they can play that press bail and get up in receivers' face and reroute them and not only have length, but have speed and athleticism, is a huge asset for us moving forward."

It will be interesting to see how Bowles changes up his coverages. It sounds like he wants to have to create more pressure up front.

As a side note, Shaun Church tweeted out some coverage facts about Cromartie. Enjoy them. 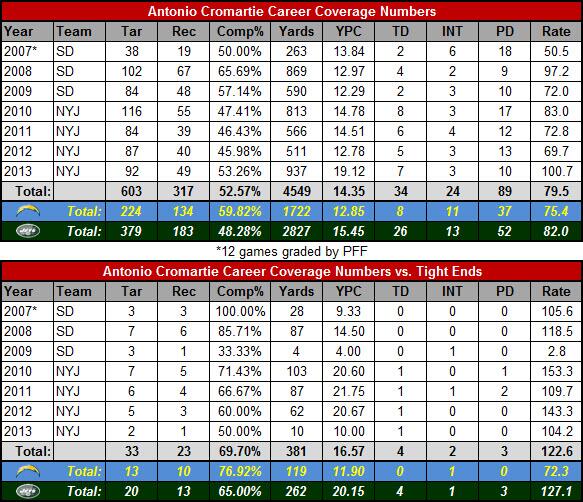