The fourth round rookie showed off an impressive arm, some excellent patience and poise in the pocket, and put the ball in spots where few others are able too. Yet was he as good as his numbers said?

Welcome to the show Logan Thomas?  11-12, 113 yards and one touchdown, and the touchdown? That was the play that makes the fan base yearn for more, but it sounds like we won't see Logan until August 23rd, as Ryan Lindley is set to get the second half reps against the Minnesota Vikings.

What Logan Thomas did on Saturday night was impressive, even if we all know the caveat of Thomas playing against the third and fourth teamers of the Texans, who were not very good if we are being honest.

It started early and it continued throughout the game with Thomas doing everything that we had heard he could not do.

With the Cardinals set up on 3rd and 8, Thomas starts in a shotgun formation with trips to his right and a single receiver to the left. When the trips formation come out Thomas whips his head to the right, he sees the man on Walt Powell off, he hits his third step and releases the ball, before Powell even starts his break.

It's a perfect throw, to where only his receiver can get too it and this is one of the throws that allows Powell to make the catch and get yards after it.

His next throw is on 3rd and 7, this time in a 2x2, from the shotgun, he works off the double stack again, where Brittan Golden and Kevin Ozier run off a dig and out combo.  Ozier makes the off defensive back wait just long enough that Thomas can put a dart on the out to Golden.  It is almost the same throw as his first, a three step drop with a two read choice and both times he makes the right throw.  Unfortunately, there were two issues with this completed pass, the first that he throws behind Golden who makes a nice play on the ball and an excellent catch, but moreover he misses a WIDE OPEN Walt Powell coming across the middle of the field on drag route. 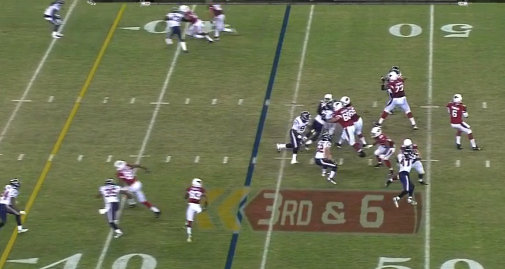 You can't complain about the result, but you can see the simplification of what Arians wanted to do in order to get Thomas into a rhythm. It worked, but going forward you would like to see him make that next read.

His next couple of dropbacks resulted in an incompletion that was negated because of offsetting penalties, then being sacked on a safety blitz where he didn't pull the trigger on a hot route.

On a 2nd and 5 from the Texans 31 we see the Cardinals in a two tight end set with two wide receivers and a single back.  They show a heavy two tight end to the right and shift Dan Buckner down to almost a triple tight end look.

They run a quick slant with the now single wide receiver and Thomas opens up and delivers a strike to Golden.  Some say the ball was behind the receiver, but in this instance, with the defensive back coming down, I think the ball was at a good place.  It's a simple two step, one read throw, but again it is using Thomas' strengths of a quick release and a power throw. 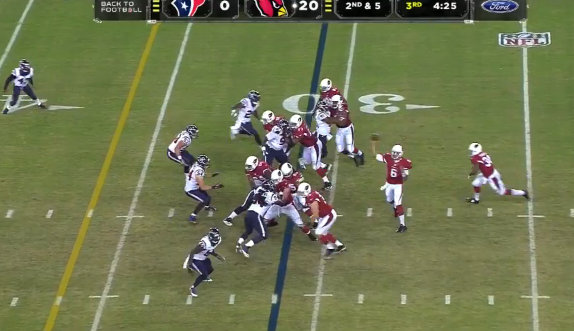 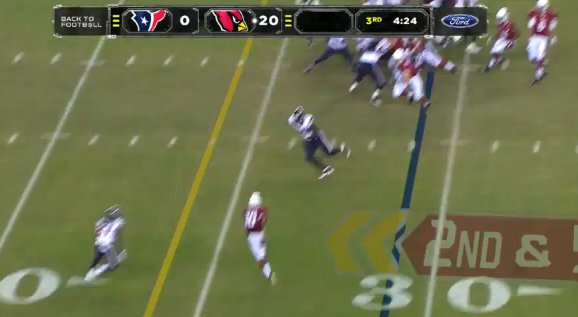 The next throw is where the accuracy started to come into play, but truth be told, that is a tough throw for anyone, and he put the ball out for his receiver to run under it, just not with enough air under it.

The next two plays were passes, giving Thomas his first deep attempt, we then see Thomas go short and get into another rhythm, before uncorking his best set throw of the night.

The first pass was a quick slip pass to Golden that resulted in Walt Powell getting called for holding, but it was what happened next that should make every Cardinals fan excited for his future.

The Cardinals run a trips tight right, with a single receiver left, it makes the free safety have to cheat over to the trips side of the formation, and then Logan Thomas does the rest with his eyes and his arm. 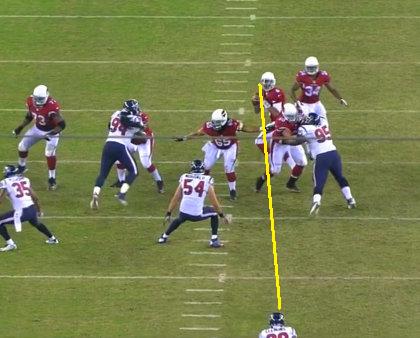 Thomas freezes the safety in his drop, looking towards the middle of the field, and allowing Kevin Ozier to get inside his defensive back before delivering an absolute strike, with pressure in his face from 95, over the head of one safety and just out of the reach of the corner in coverage. 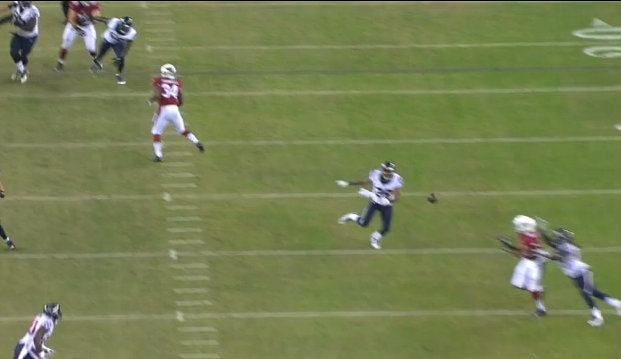 Thomas's next pass was similar to another completion to Brittan Golden, on a quick slant, he takes two steps and delivers the ball to Golden for an easy seven yard gain.

The last throw of the third quarter was a quick four yard dig where Thomas waits for the linebacker to clear out before he makes the easy pitch and catch with Dan Buckner.

On 1st and 10 in the fourth quarter we see another special play by Logan Thomas. He runs a play action pass, lets his tight end get out into a 15 yard out, sets his feet and drops a dime to Andre Hardy.

On his last drive we saw more of the same from Thomas with a quick throw to Brittan Golden for a short gain, then another strike with pressure coming, this time to Walt Powell.

The of course, there is the play that everyone has been talking about.

The reads were simple a lot of the time, he was given option routes that his receivers would run, he only had to read one side of the field, but he did it and did so EXTREMELY well. Most importantly, he stood tall in the pocket and made plays that not many quarterbacks can make.

It's early, but maybe the Cardinals and their fans do have something to look forward to.